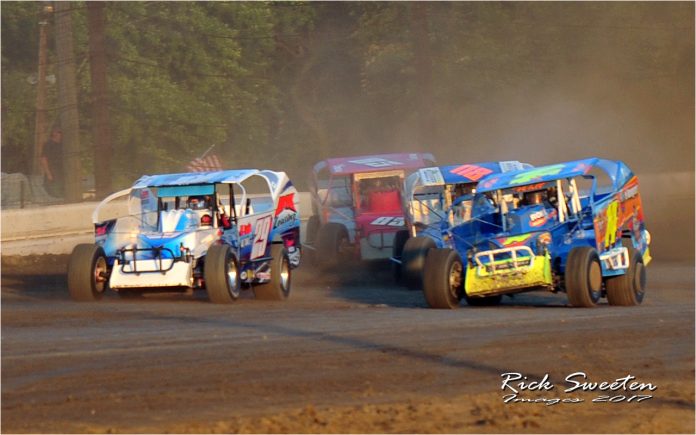 SWEDESBORO, NJ – The Bridgeport Speedway will wave the checkered flag on the 2017 season with the Wild Card Weekend – the final hand of the 2017 Colonial Pipeline Call Before You Dig Poker Series – with a two day event on Friday, November 10th and Saturday, November 11th.

On Friday night, the Small Block Modifieds will return to action on the 5/8 mile track for their fourth appearance of the 2017 season. Rick Laubach, Brett Kressley and Jeff Strunk have picked up wins in Bridgeport’s Small Block Modified action so far this season and will be looking for a second win in the Friday night action along with drivers like 2017 Bridgeport Champion, Ryan Watt, Craig VonDohren, Ryan Godown, Duane Howard, Dominick Buffalino and a host of others. The Pennco Tech Outlaw Stocks will also appear on the Friday night race card, competing in their 5th hand of the 2017 Poker Series. Several practice sessions will be run throughout the evening to allow drivers to prepare for Saturday night action.

The annual Friends and Fans party will take place following Friday night’s racing program. There will be a bonfire, music, food and drinks and everyone is invited!

Pit gates open at 4pm on Friday, grandstands at 5:30 with racing getting underway at 7:30.

The second night of racing comes on Saturday with the Spirit Auto Center Big Block Modifieds, Stewart Stainless Crate/Sportsman and Pennco Tech Outlaw Stocks all competing in the final hand of the 2017 Colonial Pipeline Call Before You Dig Poker Series.

Pit gates will open at noon on Saturday, grandstands at 2 with racing going green at 4pm.

In honor of Veteran’s Day, a special pre-race ceremony will be held including a musical tribute, an address from a Veteran of the US Armed Forces to be followed by the pledge of allegiance and national anthem. Aid for Veterans, a non-profit organization, will be on site for Saturday’s events, conducting fund raising activities.

Despite the dominant performances of several drivers, the Poker Series Championship is still up for grabs in all three divisions.

Ryan Watt comes into the final hand in the Big Block competition with a dominating hand of three Aces, a King and a four but Dominick Buffalino finds himself in the same position that Watt was in just a year ago. Buffalino needs a fifth place finish to complete his Queen high straight. Last year, Watt raced in position to complete his straight until the final lap when he was passed for position. Five other drivers are still in contention for a second place Poker Series finish – Duane Howard, Brett Kressley, Rick Laubach, Jeff Strunk and Neal Williams.

Matt Stangle also has three Aces along with an eight and a seven going into the final hand for the Crate/Sportsman but a win by Brian Papiez would give him three Aces and a Jack and a possible top hand. Four other drivers are still in the running for a second place hand.

Tom Wills, Jr. has two pair – Aces and Kings – with the Outlaw Stocks competing in two hands of Poker Series action this weekend. Jeff Dirkes boasts a pair of Queens, a King and a ten and could still challenge Wills for the title. Ten other drivers could still do as well as a runner-up finish to the champion.

This is the first time that all three track champions are competing for the Poker Series titles going into the final race.

For the second season in a row, Colonial Pipeline has been the title sponsor of Bridgeport’s Poker Series. Colonial’s Pipelines are buried underground, usually with at least three feet of cover. However, with the passage of time, erosions and human activities can alter that depth. That’s why Colonial Pipeline encourages you to call you dig! Any project – large or small – you are encouraged to dial 8-1-1 before you dig!

Come out early for the final race weekend of the 2017 racing season. Enjoy the free entertainment, the Bounce House or the fine offerings of the Bridgeport concession stands. Pick up a souvenir shirt or a copy of the official Bridgeport Speedway program – the Bridgeport Bullet. Take a ride with the Bridgeport Bandit on the Bandit Bus and get a behind the scenes look at the action from the pit area.

You won’t want to miss the Wild Card Weekend!