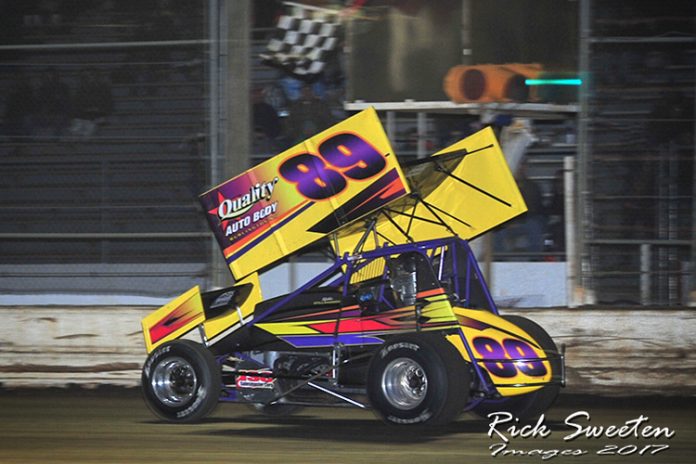 SWEDESBORO, NJ – Robbie Stillwaggon raced to his first ever victory on the 5/8 mile Bridgeport Speedway by capturing the Saturday night portion of the Big Track Classic. Stillwaggon’s fourth place finish on Friday night along with his win on Saturday gave him the best record for the weekend and as a result, the Midge Miller Memorial Trophy, given in honor of the former URC competitor and club official.

“I really wanted that trophy,” an excited Stillwaggon exclaimed in victory lane. It was a big win for the Stillwaggon brothers, Robbie and brother, Ryan who works as crew chief for Robbie. Ryan has won at Bridgeport this season, racing with the Mid Atlantic Sprint Series (MASS) but it was his first win as a crew chief as he wrenched the No. 89 car that took his brother to Victory Lane.

Stillwaggon jumped into the early race lead as the field exited turn two on the initial start. The racing came to a sudden stop though when Tom Carberry Sr. went for a wild ride in turn three and ended up on top of the guardrail. Carberry was not injured but removing his No. 1 from the gurardrail took some doing by the track safety crew.

On the restart, it was Chad Layton who got a run on the outside to challenge Mark Bitner for second but Bitner rallied back on the inside to reclaim the position. Stillwaggon led the way through lap five followed by Bitner, Josh Weller, Layton and Adam Carberry.

Several single car incidents required caution flags during the early laps. Weller made use of the inside line to challenge for second but Bitner held on to the position.

JJ Grasso broke into the top five by lap ten with a pass by Friday night winner, Lucas Wolfe.

By halfway, Stillwaggon was making his way through lapped traffic as he pulled away from Bitner, Weller, Layton and Grasso. 2017 URC Champion, Curt Michael was on the move as he raced from his twelfth place starting spot to just outside the top five.

Just eight laps from the finish, Chris Coyle slowed and brought out the race’s final caution and double file restart. Bitner raced beside Stillwaggon as they headed down the homestretch as Weller made use of the bottom of the track to take over second. Michael raced Grasso for fifth just before five to go.

After being in the midst of the battle throughout the race, Bitner faded in the closing laps. Stillwaggon raced to his first Bridgeport checkered flag followed by Weller, Layton, Michael and Grasso. Wolfe, Bitner, Steve Buckwalter, Davey Sammons and Adam Carberry rounded out the top ten.

Manning actually set the fastest lap time of the race as he took over second on lap six.

New York state invader, Rocky Warner made his first Bridgeport appearance and found the track to his liking as he chased Papiez and Manning to the checkered flag. Rookie driver, Louden Reimert recorded his best Bridgeport finish in fourth while Rich Wenger, Jr. edged ahead of Kris Lilick on the final lap to round out the top five.

Racing returns to the Bridgeport Speedway this weekend for the final races of the 2017 season with Wild Card Weekend. The 358 Small Block Modifieds will share the Friday night race card with the Outlaw Stocks who will compete in the fifth hand of the 2017 Colonial Pipeline Call Before You Dig Poker Series. On Saturday night, the Spirit Auto Center Big Block Modifieds, the Stewart Stainless Crate/Sportsman and Pennco Tech Oultlaw Stocks will compete in hand number six and three Poker Champions will be crowned when the final checkered flags are waved. Racing gets underway at 7:30 on Friday with a 4pm start on Saturday.