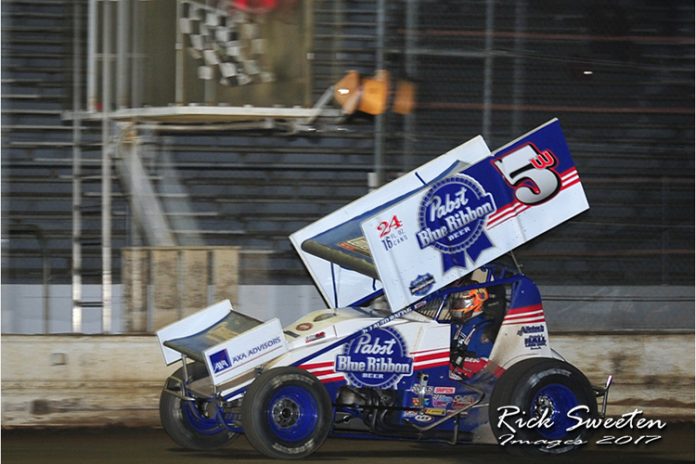 SWEDESBORO, NJ – Lucas Wolfe picked up right where he left off a year ago as he drove to victory in the first night of the Capitol Renegade United Racing Club (URC) Big Track Classic action at the Bridgeport Speedway sponsored by BRB Construction of King of Prussia, PA.

Wolfe was the Saturday night winner in last year’s event after a fifth place finish during Friday night’s action won by Curt Michael.

Kevin Nagy and ten time URC Champion, Michael led the field to the start of the twenty-five lap feature event. Nagy jumped in the lead on the start followed by Michael, JJ Grasso and Wolfe. By alp five, Nagy had caught the back of the starting line-up but a caution flag on lap six, cleared the track for the race leader. The lap six restart proved to be the key to the race as Wolfe moved up to third on the restart. “Everyone was pretty locked into the same speed on the original start,” Wolfe explained. “I was in a better position on that restart and I was pretty good everywhere on the track.”

Nagy led lap six with Michael racing into the lead on lap seven. Nagy was back out in front on the next circuit as Wolfe moved into the runner-up spot. Wolfe took it three wide into turn three to take the lead from Nagy on lap twelve.

Grosso moved up to third at the half way mark but Michael reclaimed the spot on the next time around. Josh Weller was on the move through the top ten. Weller was forced to make the starting line-up through the consolation after a flat tire sidelined him from a qualifying spot in his heat race.

The leaders were again in lapped traffic just before the five to go sign. Michael challenged Nagy for second and took the spot as the two drivers raced through lapped traffic.

Wolfe led the way to the checkered flag followed by Michael, Nagy, Robbie Stillwaggon and Weller. Stillwaggon battled with Grasso throughout the race with Grasso fading in the closing laps. Weller moved into fifth on the final lap.

Kris Lilick led from the green flag to the checkered to capture the Underdog 20 Crate/Sportsman feature. Any driver who had not won during the 2017 season was eligible for this special race.

John Micek raced into second from his seventh place start to trail Lilick to the checkered. Chris Jenkins held off the persistent challenges of Jesse Landis to finish third with Tom Moore rounding out the top five after starting deep in the pack.

Both Lilick and Micek earned guaranteed starting spots in the Crate/Sportsman portion of Saturday night’s program by setting fast time for the Sportsman and Crates, respectively, during timed hot laps.