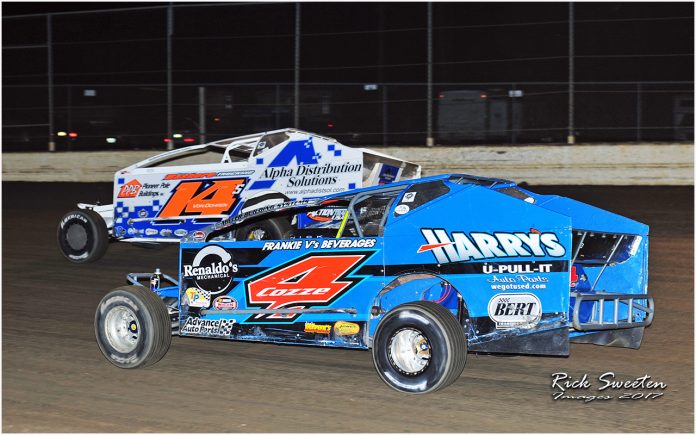 SWEDESBORO, NJ – After a pair of second place finishes, Craig Von Dohren made a strong statement as he raced to the win in the 358 Small Block Modified feature event at the Bridgeport Speedway on the first night of the Wildcard Racing weekend. Tom Wills, Jr. raced to his sixth win of the season in Pennco Tech Outlaw Stock competition.

The leaders were in lapped traffic by lap eight but a caution was needed for Chris Grbac one lap later. Kressley gained a clear track on the restart but had Watt, Strunk, Von Dohren and Cozze on his tail for the green flag. Von Dohren raced into third as Watt challenged for the lead.

Watt and Von Dohren raced side by side on lap eleven with Von Dohren taking the spot off of turn two. Von Dohren looked to the inside of Kressley on several occasions but it was a move to the outside that paid dividends as Von Dohren put Dick Biever’s No. 14s out in front on lap sixteen.

Dominick Buffalino had just raced his way up to third before the lead change and it wasn’t long before he had dropped Kressley to third while Watt and Strunk battled for position.


Von Dohren raced away from the field but Buffalino was able to close some of the gap as they raced through lapped traffic in the closing laps. Von Dohren raced to the win – his first at Bridgeport since he doubled during the 2008 Atlantic Coast weekend. Buffalino finished second followed by Kressley, Watt and Strunk. Cozze, Billy Pauch, Jr., Duane Howard, Brandon Grosso and Dylan Steuer rounded out the top ten.

“The bottom really felt good,” Von Dohren explained after the win. “Kressley kept moving down, which is what you do. That left the top open and I had to go for it. I didn’t know what it was going to do but I went to the outside and it stuck.”

Wills raced into the lead on lap six as Stinson, Doerr, Broschard and TJ Henry all battled for position. Both Doerr and Henry exited with mechanical problems by halfway as Wills raced ahead for the win and his third Ace in Poker Series competition.