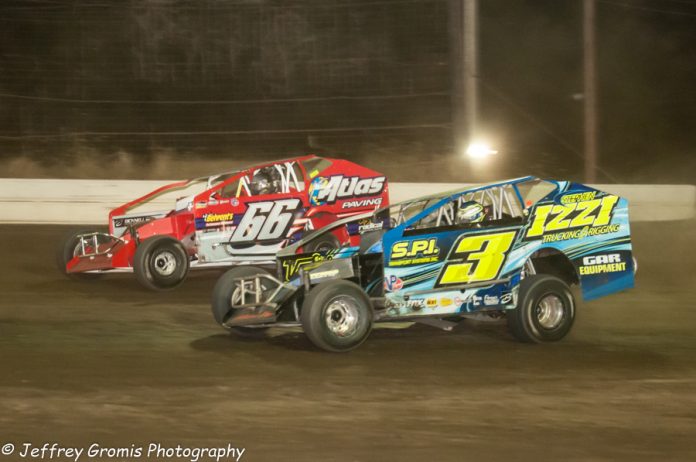 The Bridgeport Speedway’s 2018 racing schedule and The Big Three are what everyone is talking about!

The first of the Big Three events comes on Wednesday, May 16th when the drivers of the Super DIRTcar Series return to the Bridgeport Speedway for the Battle of the Bridge. The return of the Super DIRTcar Series to the Logan Township race track last season was a huge success as Bridgeport regulars, Ryan Watt and Billy Pauch led the Series drivers to the checkered flag. Can the Bridgeport regulars defend their turf again this year or will the boys from DIRT be seeking revenge??

The Crate cars will be part of the Battle of the Bridge program on the 5/8th mile track. A Thursday night rain date (May 17th) has been set aside should it become necessary.

Just one week later on Tuesday, May 22nd the World of Outlaws (WoO) Sprint Cars will come to town for their first Bridgeport appearance in nearly fifteen years! The second of the Big Three shows will be the only time that the WoO appear in the Garden State during the 2018 season. Racing fans will have the opportunity to see drivers like Donny Schatz, David Gravel, Kerry Madsen and more take on the talent in the 410 Sprint Car world of the Northeast. No wonder it is billed as the Greatest Show on Dirt!

The Crate drivers will also be part of this show which will be run on the new 3/8th mile track. Should it be necessary, a rain date has been set for Wednesday, May 23rd.

Then on Monday, June 18th the United States Auto Club’s (USAC) Eastern Storm will make it’s first ever appearance at the Bridgeport Speedway. Fans will be able to see drivers like Justin Grant, Brady Bacon, Chris Windom and Robert Ballous toss their wingless sprint cars through the corners of the 3/8th mile track. As always, the local talent will be on hand to challenge the names of USAC for this event.