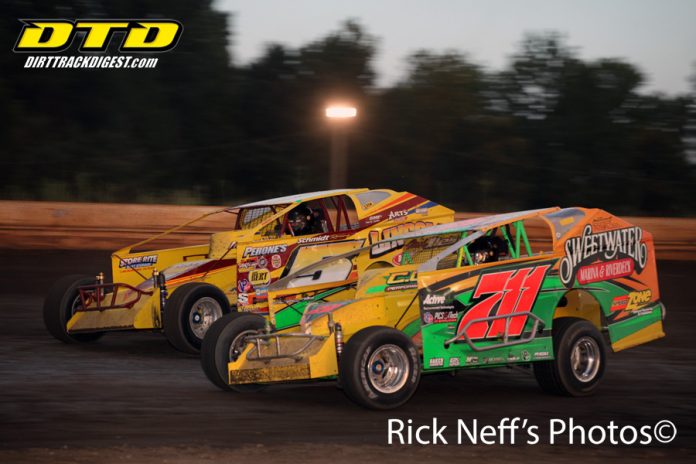 BRIDGEPORT, NJ – The buzz surrounding Bridgeport’s newly constructed 3/8 mile clay oval, which will now be referred to as ‘Design for Vision/Sunglass Central Speedway the 3/8 mile at Bridgeport’, has been overwhelming to say the least. The South Jersey racing complex is now the only track in the country to have three circle tracks all in the same central location using the same straightaway. The 5/8 mile track will remain the weekly focus for the competitors with track championship points being awarded throughout the season. The 1/4 mile known as Spirit Auto Center Speedway will stay the course operating on Friday evenings along with select Saturday and Sunday programs.

However, it’s the brand-new 3/8 mile that will host an extremely diverse amount of racing divisions in 2018. Of course the World of Outlaws and USAC Sprint Cars have already been inked onto the 3/8, as are the Super Late Models, USAC Wingless 360s, 358 small blocks, and MASS 305 Sprints. The first three races for the 3/8 mile will make up the newly-formed ‘Pre-Season’ Point Series. This is when Bridgeport’s weekly racing classes (Big Block, 602 Crate-Sportsman, Outlaw Stock) will get to shine way before all the national touring series have their crack at the new oval.

Race fans need to mark Sunday, April 22 on their calendars, as the Spirit Auto Center Big Blocks, Stewart Stainless 602 Crate-Sportsman, MASS 305 Sprint Cars, and D.A.’s Auto Body Rookies make history in the first-ever event on the 3/8 track. This show will be considered race #1 of the three-race series. Race #2 will be the ‘South Jersey Shootout’ as the STSS Modifieds come to town on Sunday, April 29 for a $5,000 payday awaiting the winner. Joining the Modifieds are the 602 Crate-Sportsman and the Pennco Tech Outlaw Stocks. Completing the ‘Pre-Season’ point series will be another Sunday show coming on Sunday, May 13. Three champions will be crowned on this day, consisting of the Modifieds, 602 Crate-Sportsman, and the Outlaw Stocks.

The Modified champion will earn an attractive $1,000 for their efforts for competing in just three races! Second through fifth place will finish in the money as well, as those drivers will receive $800, $600, $400, and $300 respectively. The 602 Crate-Sportsman champion will walk away from Bridgeport with a sweet $500 first-place prize. Again, second through fifth in points will place in the money as they will collect $400, $300, $200, and $100. Even though the Outlaw Stocks will only compete in two racing programs, they too will see a point fund. That champion will profit $250, while second place will bring home $150 and third in the final tabulations will cop $100.

And that’s not all. There will also be a unique twist involved in the Pre-Season point series! With only 5 races being booked on the 5/8 mile for the extremely popular ’18 Poker Series, the top 13 of the final point calculations will each receive a playing card. In other words, the champion of the three-race series will earn an ‘Ace’, second high point man a ‘King’ all the way down to the 13th place finisher thus earning a ‘2’. New track, new point series, and a new twist all heading into a new year at Bridgeport Speedway.

Bridgeport’s annual practice day will take place on Saturday March 24 at noon. The Spirit Auto Center Speedway 1/4 mile will hit the track at 3pm. Then on Saturday, April 7 the drivers will finally get to sink their teeth into the ‘Design for Vision/Sunglass Central Speedway the 3/8 mile at Bridgeport’ at 5pm for open practice directly after the second practice for the 1/4 mile (2-5pm). For more information you can log onto the track’s official website at www.bpspeedway.com or follow the track on Facebook, Twitter, and Instagram. You can also call the speedway directly at 856-467-4408.