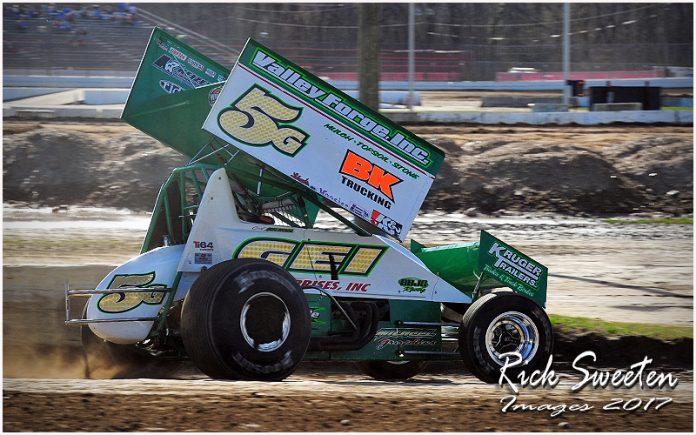 BRIDGEPORT, NJ – The Bridgeport Speedway will host its first big Sunday show of the season this Sunday as they host the season opener for the United Racing Club Sprint Cars for the fourth consecutive season.

The Spirit Auto Center Big Block Modifieds will take to the 5/8th mile track for their regular show along with the Stewart Stainless 602 Crate Sportsman and the DA’s Auto Body & Repair Rookies.

Sunday’s racing will be brought to the fans by BRB Contractors out of King of Prussia, PA. Bob Lilick the owner and operator of BRB Contractors has been involved in racing for many years and has fielded multiple cars in different divisions for his sons. BRB Contractor’s is an Industrial, Commercial, and Residential Demolition, Excavation & Paving Company and has been in business for over 16 years. Contact BRB Contractors for all your Construction needs.

Ryan Watt has already picked up where he left off last season as he raced to the win in the 60 Over Special – Doug Hoffman Memorial Race earlier this month. The first 602 Crate Sportsman feature of the season was won by invader, Adam McAuliffe over Eric Kormann who closed in to challenge the leader in the final laps. This event will be the first race of the season for the Rookies who have only had the opportunity to practice so far this season.

While this will be the first race of the season for URC competitors, several drivers started their season a week early by traveling to Carolina Speedway to compete in the North (URC) vs South (USCS) event that saw Mertztown, PA driver, Josh Weller capture the win – taking his first ever season opener. Weller will be in the field Sunday when the Capitol Renegade United Racing Club throws the green flag on their 71st season. Curt Michael and the Bill Gallagher No. 5G will be on hand to defend his title along with Troy Betts, Justin Whittall, Mark Bitner, Adam Carberry, Chris Coyle and more.