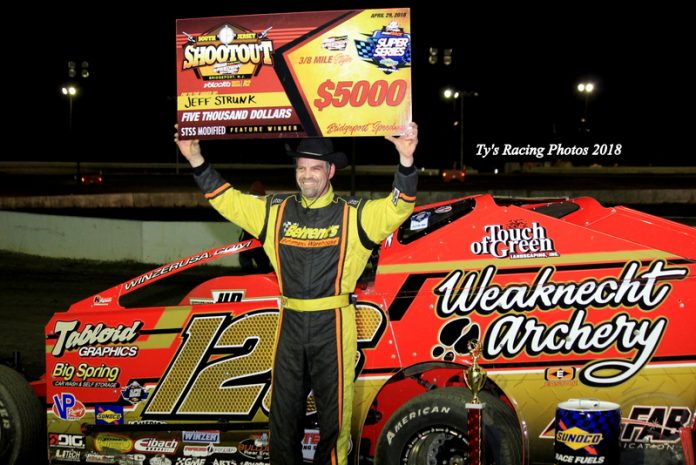 Driving Glenn Hyneman’s Keystone Racing No. 126 with spec small-block power, Strunk dominated the day’s events, launching off the pole via a pre-race redraw of top qualifiers and leading all of the 40 laps.

Strunk earned $5,000 for his victory and an additional $100 from Beyea Headers for turning the day’s fastest lap in timed warm-ups.

“I’ve been trying for a long time to win one of these races,” offered Strunk, who became the 23rd different winner in 51 STSS events contested since BD Motorsports Media LLC formed the series in 2014.


“There was no junk here today. They were all good cars. Even when I was in lapped traffic I was racing cars that could win a feature any given weekend. That’s what makes this series such a challenge.”

A field of 46 STSS Modifieds signed in for the second round of the STSS South Region and the first-ever series visit to the new three-eighths-mile oval at Bridgeport.

Strunk drew the pole during a fan meet and greet behind the grandstands moments before the 40-lap main reached starter Warren Alston’s green flag. Strunk immediately drew away from New York State invader Danny Creeden, who settled into second.

The first 10 laps spun off caution-free before disaster struck at the exit of turn two. Frank Cozze, who had been rim-riding on the outside lane from his sixth starting position, and Creeden met at the exit of turn two. Cozze’s No. 401 shot off the track and made contact with a tire marker, drawing the red. Initially shaken, the Wind Gap, Pa., driver walked away.

On the restart, the inside lane jammed up and caused a multi-car tangle that saw Jared Umbenhauer on his side. A second red and short clean-up ensued.

When green-flag racing resumed, Strunk again motored away from Creeden, who now felt pressure from Matt Sheppard in the Hurlock Auto & Speed No. 9s.

Sheppard ultimately cleared Creeden entering the race’s final quarter, but was more than a straightaway behind Strunk, who was negotiating lapped traffic.

The race’s final yellow flew on lap 36 for a flat tire on Creeden’s car.

Strunk knew he had company on the restart in the form of Sheppard and 10th-starter Stewart Friesen, who had dropped deep in the field early and rallied back in the Halmar International No. 44.

“I looked at the scoreboard there on that last yellow and saw two of the best right behind me,” Strunk said. “I knew I had to hit my marks and not make any mistakes just like the first 36 laps.”

Strunk is now two-for-two on the new three-eighths-mile oval at Bridgeport.

“It’s a long ride down here to run these races,” Sheppard said. “But it makes the ride a lot easier when we keep having good runs.”

Friesen, of Sprakers, N.Y., completed the podium in third spot, followed by Sheffield, Mass., driver Andy Bachetti, who started 11th and Montgomery, N.Y., driver Anthony Perrego, who rolled off eighth in Brian Smith’s No. 44 before getting shuffled back in the early laps and recovering for fifth.

Finishing sixth through 10th, respectively, were Ryan Godown of Ringoes, N.J., who switched to a back-up spec engine car after track-run-in; Rick Laubach of Hellertown, Pa., driving Ryan Kerr’s No. 1K; Duane Howard of Oley, Pa., in the Norm Hansell-owned No. 357; Billy Pauch Jr. of Milford, N.J., who started 20th in Daniel Sommeling’s No. 51; and David Van Horn Jr. of Harmony, N.J., who rolled off 16th in Fred Vahlsing’s No. 323ov.

Strunk set the fastest lap during timed warm-ups and earned $100 from Beyea Headers.

Tom Collins Jr. of Lansing, N.Y., made the long tow to South Jersey for Round No. 2 of the STSS Crate 602 Sportsman South Region. His haul was rewarded with a $1,000 victory in the 20-lap event.

Collins had run on the Bridgeport five-eighths-mile before, but had not laid eyes on the three-eighths-mile until Sunday morning. However, he took an immediate liking to the venue and led from start-to-finish in the 20-lap main impressively, opening up a lead of more than a full straightaway at times.

“I really like this smaller track,” Collins said with a smile after the main event. “It’s cool to travel around and see all these different facilities. I’m planning on chasing both the North and the South of this series. We will probably run more than 60 races overall.”

Another Empire State driver – Cory Cormier of Otisville, N.Y. – chased Collins to the stripe, finishing second. Rick Wegner Jr. made a ‘game-day’ decision to compete on Sunday and ended up a solid third, followed by Pennsylvania teenager Dylan Swinehart and Scott Kohler.

BRIDGEPORT BITS: With the three-eighths-mile in operation for only the second time since its construction, the turn-one pit area was utilized to bring fans closer to the action and allow crew members to watch from the main grandstand with a clear view….

Tough break for Delaware’s Jordan Watson, who showed speed early in the program before suffering terminal engine woes during his heat-race program….

The ‘South Jersey Shootout’ STSS Modified field grew from a year ago to a solid 46 cars from across the Mid-Atlantic and Northeast….

Up next for the STSS is the ‘Hard Clay Open’ on Tuesday, May 8 at N.Y.’s Orange County Fair Speedway to kick off the Halmar International North Region with a 50-lap main event paying $5,000 to win and $500 just to take the green flag. The Orange County Sportsman division will be on the docket as well with a $1,000-to-win 20-lap main.

The STSS Velocita-USA South Region heads to Delaware International Speedway in Delmar, Del., on Thursday, May 24 with the ‘Diamond State 50’ offering $5,000 to win plus the STSS Crate 602 Sportsman ($1,000 to win) and Delaware Super Trucks.