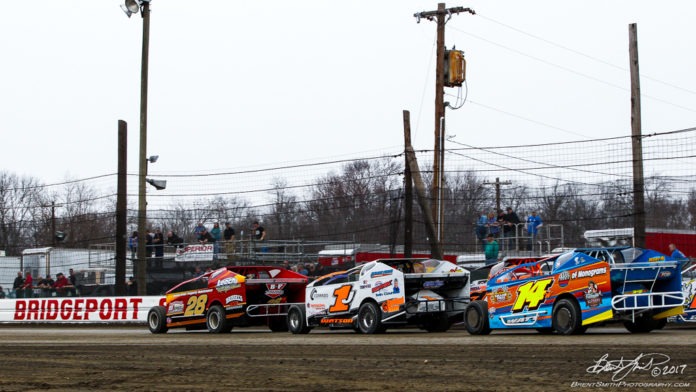 BRIDGEPORT, NJ – ​Two big days of racing are on tap at the Bridgeport Speedway in the coming week.

On Sunday, the racing action will return to the 5/8th mile track at the Bridgeport Speedway for the final race of the Pre Season Point Championship.

Speedway management decided to make the change from the 3/8th mile facility because of the Super DIRTcar event at the track just three days later. Transitioning between to the two racing surfaces has proven to be more challenging than could have been anticipated when the season schedule was prepared. Running the 5/8th mile track on Sunday will also give area race teams another chance to prepare for the Battle of the Bridge on May 16th.

In addition to point money for the top finishing positions in points, the top thirteen drivers in each division will also receive a card for their 811 Dig Safely Poker Series hand with an Ace going to the top point man all the way down to a deuce for the thirteenth place finish in points.

After two events, Jeff Strunk is the leader in the Spirit Auto Center Big Block Modifieds with 120 points over second place, Ryan Godown (98) and Duane Howard (92). Tommy Scheetz, Sr. leads the way in the Stewart Stainless 602 Crate Sportsman with 90 points to Eric Kormann’s 88 points and Steve Kemery’s 84 points. The Pennco Tech Outlaw Stocks have only competed once on the new surface with Jeramy Doerr leading the way with 90 points over Tom Wills, Jr. (56) and Spider Ensinger (52).

Then just three days later, it’s the Battle of the Bridge as the Super DIRTcar series returns to the Bridgeport Speedway.

This event will be the first race of the season in the Northeast for the Super DIRTcar series after inclimate weather caused the cancellation of the High Bank Holdup last month at the Fulton Speedway. If this event compares to the 2017 race, it will be a night that no racing fan will want to miss!

Billy Pauch, Jr. was the early race leader in the 2017 event until Rick Laubach took command on lap three. Ryan Watt had just taken the lead on lap ten when Laubach headed pitside for a tire change. It was Watt all the way to the checkered with Billy Pauch trailing him to the checkered. Peter Britten was the highest DIRTseries competitor with his third place finish. After growing up watching ‘This Week on Dirt’, Watt found himself a race winner in the Super DIRTcar series event. Forty-seven Big Block Modifieds were on hand for the first DIRTcar event to be held at Bridgeport since November 2005.

It was Matt Sheppard who was crowned as the 2017 Super DIRTcar Series champion over Billy Decker, Larry Wight, Pat Ward and Jimmy Phelps. They will be on hand for the Battle of the Bridge at Bridgeport along with a host of Bridgeport regulars and invaders from throughout the Northeast when the Super DIRTcar Series makes it return.