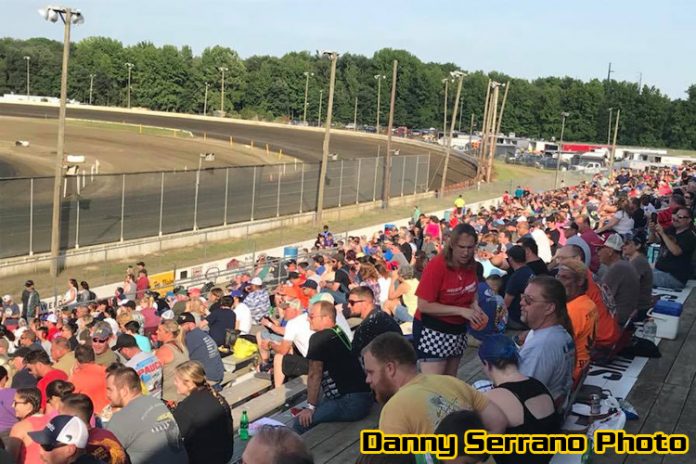 BRIDGEPORT, NJ – For the third consecutive season, the Bridgeport Speedway has presented a Pack the House Night, offering FREE grandstand admission for an eight division night of racing on the 5/8th mile and Spirit Speedway quarter mile tracks. It was a full night of excitement as many attended their first ever dirt track race.

Jim Gallagher, Jr. delivered a Father’s Day present to his dad one day early as he raced to his first win of the season in the Stewart Stainless 602 Crate Sportsman Feature event. Gallagher, Jr., the 2017 Rookie Champion, earned his first win last season but has struggled with mechanical issues with a new mount this season.

After weeks of work, the problem was found and Gallagher drove to victory, taking the lead on the first lap from polesitter, Parker Guldin. David Crossman raced to his second consecutive runner-up finish after pressuring Gallagher on every restart in the twenty lap event. Eric Kormann finished third with his Dave Stanton Tribute bodied No. 92D followed by Steve Kemery. Last week’s feature winner, Tommy Errico, raced to a top five finish in the race’s final laps.

Austin Bishop earned his first ever Mid Atlantic Sprint Series (MASS) win over Tim Tanner and Ryan Stillwaggon. That made three wins in a row for Bishop who has won twice this season in Central PA 305 competition.

Bishop’s win almost didn’t happen as he and a hard-charging, Jeff Geiges raced down the backstretch just before the halfway mark of the Delaware Auto Exchange sponsored event. Bishop and a lapped car made contact sending the lapped car spinning into the path of Geiges. No one was injured but the race was red flagged while safety crews attended to the scene.

Bishop took the win over Tanner who battled to the finish with Stillwaggon. Point leader, Eddie Wagner finished fourth with Dave Brown coming a long way to finish fifth.

When action switched to the Spirit quarter mile, it was PJ Williams who returned to Victory Lane in the Ace Overhead Door Company 600 Micro Feature event. Williams one other Spirit victory also came in a Saturday night event earlier this season.

Williams lost the lead to Travis Hill just before the halfway mark but Hill’s engine expired after the local favorite took the crossed flags for halfway.

Willilams went on to capture the win over 600 Micro rookie, Colin Bustard. Brandon Pavel drove a career best finish of third as the top three were separated by a car length headed for the finish. Lou Cicconi finished fourth with Steve Kemery taking fifth after doing double duty in the 602 Crate Sportsman and 600 Micros.

Jacob Hendershot took a night off from work to pilot the Jim Widdoss No. 28 in Ace Overhead Door Company 270 Micro action. Hendershot made it pay off as he worked the outside to take the lead from Sean Huesser on the final lap. A disappointed Huesser finished second followed by Kyle Weiss, Ken Andreas and Steve Coslop.

Scott Miller took the lead from Joe Garey, Sr. to capture his second win of the season in i2M Four Cylinder Enduro action.

Josh Pepe led from the green to the checkered to take the win in the Excel 600 Modified feature event over Travis Fichter, Korey Inglin, Richie Hitzler and Aaron Bowes.

Action returns to the Spirit Speedway quarter mile on Friday night with the 270 and 600 Micro Sprints, 600 Novice, Four Cylinder Enduros and Slingshots with racing getting underway at 8pm. It’s Scout Night at the Bridgeport Speedway on Saturday as the Big Block Modifieds, 602 Crate Sportsman, Outlaw Stocks and Rookies take to the track, beginning at 7pm.