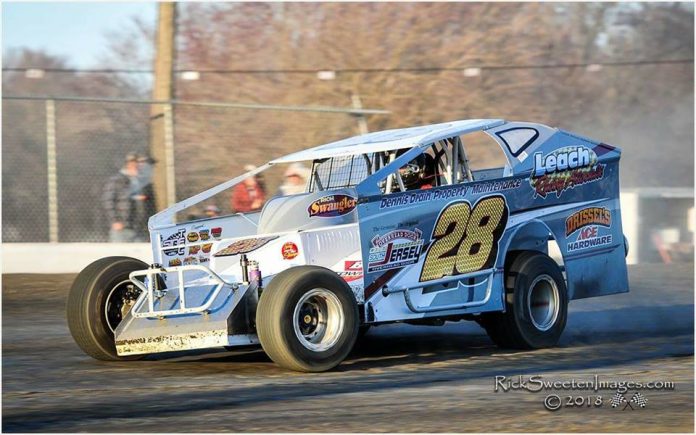 BRIDGEPORT, NJ – The temperatures may have cooled for the weekend but the racing action was still red hot when the Spirit Auto Center Big Block Modifieds took to the 5/8th mile Bridgeport Speedway on Saturday night.

Take one driver in search of his first ever Big Block Modiifed victory, add three more drivers looking for their first Bridgeport wins of the season and add a reigning track champion to the mix and you get one fantastic feature event that came right down to the final lap and the race to the checkered flag.

Polesitter, Ricky Dieva has been doing his homework – putting in extra time and effort to improve the performance of the DiEva Auto Body No. 85. DiEva took the lead at the wave of the green flag and led the way for twenty-one laps of the main event, racing ahead of Neal Williams for the distance.

Without the benefit of a rear view mirror, DiEva had no idea what was going on behind him as Richie Pratt, Jr. wheeled the Leach Associates/Overhead Door of South Jersey sponsored No. 28 to the high line and began to pick off positions in the top five. On lap sixteen, Pratt took advantage of the situation when Jim Britt made contact with the inside wall to race into third. With five to go, Williams was closing the gap on DiEva but it was Pratt who raced to the outside of Williams in Sal DeBruno’s No. 0 to take over second one lap later. Pratt raced to the outside of DiEva on lap twenty-two to take the lead.

Even a yellow flag with three laps to go would not deter Pratt who raced to his first Bridgeport win of the 2018 season as a hard charging Ryan Watt raced from fourth to second in the final laps. Williams finished third followed by Britt and Tommy Beamer. DiEva, Billy Pauch, Ronnie Roberts, Wade Hendrickson and Jimmy Horton rounded out the top ten.


Parker Guldin raced to the win in the Stewart Stainless 602 Crate Sportsman, becoming the first graduate of this year’s DA’s Auto Body & Repair Rookies to go to Victory Lane since graduation. As a matter of fact, this season’s Rookies were the show, taking advantage of being handicapped with the rest of the field. Trailing Guldin at the checkered was Sammy Martz, Jr., Danny Buccafusca – making it a 1-2-3 Rookie finish. Tom Moore finished fourth with David Crossman rounding out the top five.

Ryan Stillwaggon raced to his first Delaware Auto Exchange Mid Atlantic Sprint Series win of the season in the Quality Auto Body No. 11. Stillwaggon led from the green to the checkered, taking the win over Tim Tanner in the Tanner Dairy Store No. 18. After a two year absence, Kyle Purks returned to action with a third place finish. Rick Stief finished fourth with Tom Carberry, Sr. rounding out the top five after a back and forth battle with Eddie Wagner for the position.

The Bridgeport Speedway will be idle next weekend in preparation for the fourth running of the Three for All event on Tuesday, July 17th. The Super Late Models, Small Block Modifieds and USAC East Coast Sprint Cars on the Design for Vision/Sunglass Central 3/8th mile track. Racing gets underway at 7:15pm.

Alex Yankowski Wins ‘Money In The Mountains’ At Big Diamond