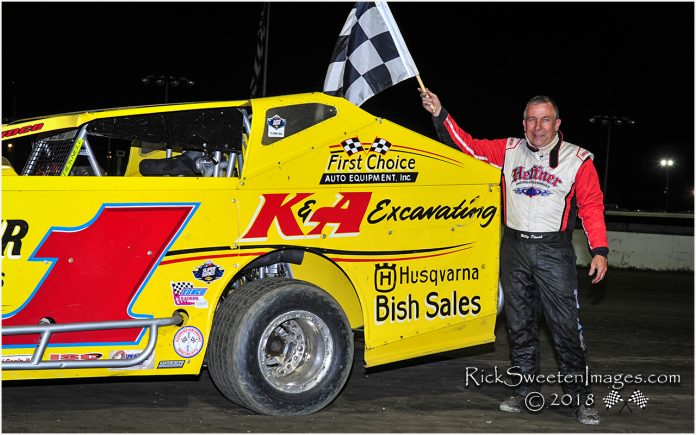 BRIDGEPORT, NJ – Billy Pauch raced to his third win of the season and sixty-second career victory at the Bridgeport Speedway by leading reigning Spirit Auto Center Big Block Modified Champion, Ryan Watt, to the checkered flag at the end of twenty-five laps on Bridgeport’s Bike Night.  Jim Gallagher, Jr. led the Stewart Stainless 602 Crate Sportsman field to the finish line for his second win of the season while Rick Stief earned his first victory of 2018 in the Delaware Auto Exchange Mid Atlantic Sprint Series (MASS) feature.

After a wild homestretch wreck a week ago that saw Pauch’s No. 1 return to the pits on the back of a wrecker, the seasoned veteran admitted to taking the first lap this week in a more conservative manner.  “I know that I’ve got to get to the front first to beat Ryan Watt but after last week, I just kind of followed the car in front of me at the start,” Pauch explained.  But in spite of that conservative outlook, Pauch raced into the lead as he and Dave Shirk crossed the start/finish line to complete lap number four.  Brett Ballard, making his first appearance of the season in his own No. 5B led laps one and two before Shirk took the lead on lap three.
Pauch started outside the sixth row, just one spot ahead of Watt on the initial start.  Watt tried to go to the outside early but lost several positions as he struggled with a car that was ” too tight for the track.”
Ten consecutive green flag laps saw Pauch well out in front of the field before Butch Tittle drew a caution just before half way.  That restart closed up the field as Jim Britt, Wade Hendrickson, Watt and Tommy Beamer trailed Pauch, the race leader.  Pauch drove away on the restart as Watt took on Hendrickson and then Britt to race into second on lap fourteen.  Watt searched for the fastest way around the 5/8th mile track as he began to gain on Pauch before the caution was needed for Sam Martz with seventeen laps scored.
That restart put Pauch and Watt side by side – Pauch’s lead erased –  but Pauch was on his game as he raced away at the wave of the green.  Watt tried everything he could to challenge the leader in those final laps but at the end of twenty-five trips around the Bridgeport Speedway, it was Pauch with the win over Watt, Hendrickson, Britt and Beamer.  Mike Franz had a strong outing to finish sixth followed by Ronnie Roberts, Richie Pratt who overcame mechanical issues to finish eighth, Dave Shirk and Jack Swain.
2017 Rookie Champion, Jim Gallagher drove a flawless twenty laps to capture his second win of the season in the 602 Crate Sportsman division.  Gallagher outgunned Roger Gaskill on the start to take the lead as he led flag to flag for the win.  Tommy Errico, Jr. raced into second as the field raced down the backstretch on the initial start and kept Gallagher on his radar for the remainder of the race but with the benefit of clean air, Gallagher was able to stretch his lead over the field.
Gallagher took the win over Errico with point leader, Eric Kormann racing to a third place finish from his tenth place start.  Bobby Bracall finished a strong fourth with Connor King coming a long way at the finish to take fifth from Sammy Martz, Jr. on the final lap.  Martz finished sixth followed by Chris Jenkins, Wayne Weaver, Tom Sherby and Brad Roberts.
Rick Stief came “home” to the Bridgeport Speedway to make his first visit to Victory Lane of the 2018 season in MASS 305 Sprint car action.  Stief, a graduate of Bridgeport micro sprint racing, led from the green to the checkered for the win over Brendon Poff.  Jeff Geiges raced to a third place finish followed by Tim Tanner and Kyle Purks.  Both Tanner and sixth place finisher, Tom Carberry, Sr. advanced the most positions in the twenty lap event.
Action returns to the Bridgeport Speedway for Powder Puff night this coming Saturday.  The Big Block Modifieds, 602 Crate Sportsman and Outlaw Stocks will battle it out before the women get their chance in the Powder Puff events.  The Vintage Cars will also be on hand for this event.  Racing gets underway at 7pm.