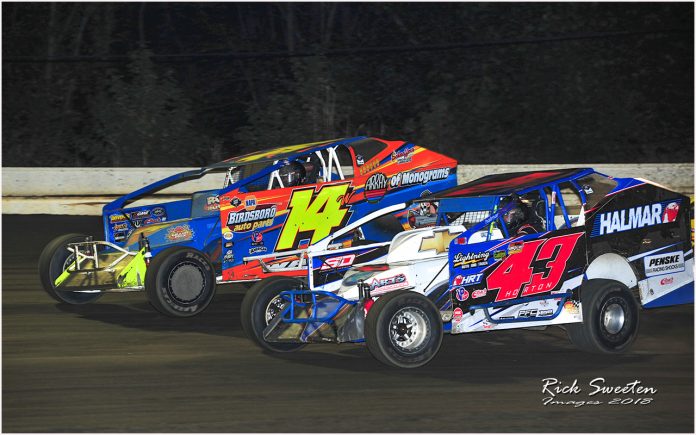 BRIDGEPORT, NJ – The scene was set for the third annual King of the Big Blocks sponsored by K&A Excavating and Spirit Auto Center.

Jimmy Horton, the winningest driver in the history of the Bridgeport Speedway drew the pole for the start of the fifty lap main event. Ryan Godown, driver the Lincoln Auto Body No. 5, a car that Horton has won with at Bridgeport on many occasions, started on the outside pole. The two young guns – Matt Stangle and Brandon Grosso followed with the first King of the Big Blocks, Billy Pauch starting in fifth.

Gary Balough led the starting line-up to the track behind the wheel of the Batmobile No. 112.

With the wave of the green flag, Horton jumped out in front while the battled was waged for the runner-up spot. Godown ran in second followed by Grosso, Wade Hendrickson and Pauch. By lap five, Pauch had moved into second, setting his sights on Horton. On lap eleven, Ryan Watt moved up to third. With twenty laps scored, just a few car lengths separated Horton, Pauch and Watt as Grosso and Godown rounded out the top five.

The red flag was thrown on lap twenty-three when Craig VonDohren got upside down in turn one before bouncing the Dick Biever No. 14s back on its wheels. VonDohren was not injured but his race for the King of the Big Block crown was over.


When the field was again underway, Pauch headed to the pits with a smoking No. 1. Pauch returned to the rear of the field following a trip to the pits but withdrew from the race a few short laps later.

When the green flag waved to restart lap twenty-three, Watt used the outside lane to race into the lead. “The bottom was so good in the beginning, you didn’t want to be on the outside on a restart,” Watt later explained. “I was just kind of riding around, watching Pauch and Horton when I started getting moisture on my helmet from Billy.” Watt added.

A lap twenty-four restart saw Neal Williams challenge Godown for second but Godown was able to regain the spot as Williams, Horton and Grosso rounded out the top five.

With less than twenty laps to run, Godown was able to cut into Watt’s lead but then he lost his line through turns one and two and Watt again stretched his lead.

Watt raced to the checkered flag without a challenge to collect the $10,000 winner’s share of the purse and his second Ace in the 2018 811 Dig Safe Poker Series. Godown ran a strong race to finish second with Williams taking third. Grosso held off the late race challenges of Ryan Krachun to finish fourth with Krachun completing the top five at the finish line. Horton, Mike Gular, Jeff Strunk, Richie Pratt, Jr. and Travis Hill rounded out the top ten at the checkered flag.

Steve Kemery picked up his first win since his Rookie year in 2015 in the Stewart Stainless 602 Crate Sportsman feature event. Kemery, the 2016 Crate/Sportsman Poker Series Champion, took the lead from Danny Buccafusca on a lap nine restart. Joe Toth raced into second when Kemery took the lead and chased the race leader all the way to the checkered flag. Kemery took the win and an Ace for his Poker Series hand followed by Toth, Wayne Weaver, Buccafusca and John Micek. Ryan Heim, Ryan Simmons, Frank Dorry, Brad Roberts and 2018 Track Champion, Eric Kormann completed the top ten at the finish.