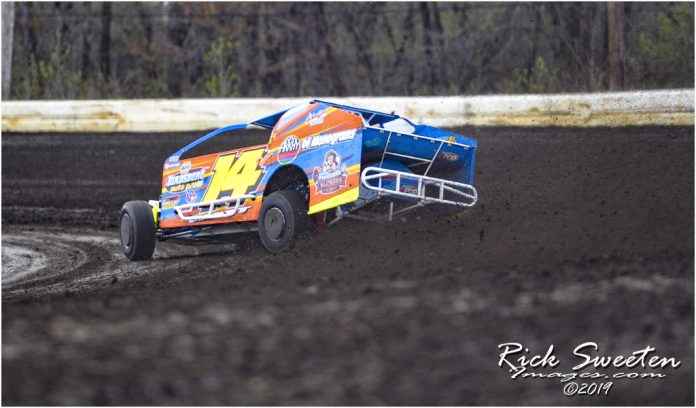 Massari & Sons Disposal Service sponsored their first event at the Bridgeport Speedway. For over sixty years, the Massari Family has provided the community with trash disposal, recylcing and curb side pick-up for commercial and residential properties. They are a local family owned and operated business. Interested parties may contact Massari & Sons for a quote.

Matt Stangle led the first 24 2/3 laps of the twenty-five lap Spirit Auto Center Big Block Modifieds feature event. After taking the lead on the original start, Stangle was able to pull away from the field. Watt moved into second on lap fifteen but Stangle was long gone at that point as he raced through lapped traffic.

Watt had closed in on Stangle in the final laps but the young racer had his Ace Materials No. 6 out in front by several car lengths as he took the white flag. Stangle went into turn three with the lead and dropped to the inside. Watt took the Roberts Racing No. 14w to the outside and raced into the lead through the corners, leading Stangle to the checkered flag for the win. “You don’t want to try to run down the leader here,” Watt explained. “You hope for a caution.” Watt was surprised when Stangle went to the inside on the final lap. “I hate to leave the bottom open for someone to get a run and slide up into you,” Stangle explained.

Tommy Beamer trailed Watt and Stangle to the finish line for third with the Thornton Gulf No. 31. Richie Pratt, Jr. raced to a fourth place finish with the Danny’s Pizza Pizazz No. 51 with Small Block power under the hood. Dominick Buffalino made his first start of the season behind the wheel of the Horton No. 76, driving to a fifth place finish.

Travis Hill visited Victory Lane for the first time since April of 2017 when he drove Brett Cogdill’s No. 98H for the win in the South Jersey Overhead Door 602 Crate Sportsman main event. Hill’s last win came with Cogdill’s No. 98.

Hill is second on the All Time Feature Winner’s list in this division – second behind Richie Pratt, Jr. The win gave Hill his thirty-second Crate Sportsman win.

Hill led from the green flag to the checkered and was able to hold off Jim Gallagher, Jr. who challenged for the lead on several occasions. Gallagher finished second ahead of Eric Kormann. Wayne Weaver’s late race charge gave him a fourth place finish ahead of Matt Peck. It was Gallagher’s third top three finish in the first three events of the season.

The South Jersey Overhead Door feature event marked the first time that all three sons of Andy Belmont – Andrew, Kyle and Brett – raced together in the same event. Kyle made a quick trip from Dover and his Penske racing team job to race with his brothers on Saturday night. Kyle took home the bragging rights with his tenth place finish.

2017 Outlaw Stock Champion, Tom Wills, Jr. took home his first win of the season in the Sunbelt Rentals Outlaw Stock feature event. Lee Allen led the way through the first ten laps of the race as Wills and Rich Stinson, Jr. raced into second and third. Wills pressed Allen in turn two on lap eleven and then took the lead one lap later, racing to the inside as the cars headed down the backstretch. Stinson also made his way by Allen.

Justin Moench took the win in the first race of the season for the DA’s Auto Body & Repair Rookies, leading all eight laps. Moench was behind the wheel of the Wenger No. 304. Scott Maher, Jr. closed in on the leader but was not able to mount a challenge.

Bridgeport action moves to the Design for Vision/Sunglass Central 3/8th mile track with the Big Block Modifieds, 602 Crate Sportsman and Mid Atlantic Sprint Series, Vintage and Rookies next Saturday night with racing getting under way at 6pm. The World of Outlaws come to Bridgeport on Tuesday, May 21st for a double header with the 602 Crate Sportsman with racing getting underway at 7:30pm.