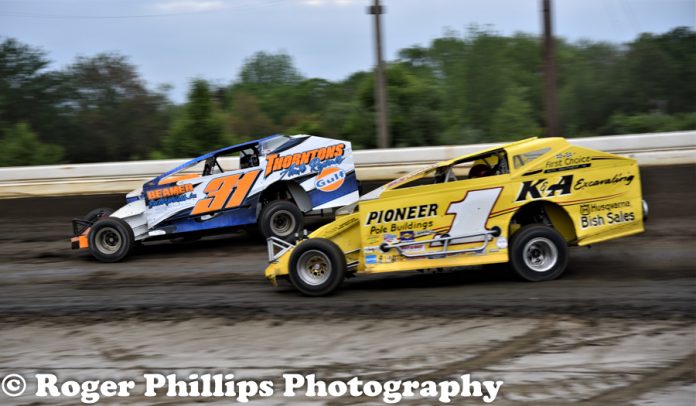 It was Pauch’s first win on the 3/8th mile track but his second win of the season at Bridgeport.  This time, his dominant victory came with his Big Block K&A Excavating No. 1 with sail panels.  “If you want to sail, you’ve got to have sail panels.  Right?,” Pauch quipped after picking up the win in the twenty-five lap feature event for the Spirit Auto Center Big Block Modifieds.
Polesitter, Roger Manning grabbed the lead at the wave of the green and then led the first three laps as Pauch made quick work from his fourth place starting position.   Pauch immediately began to distance himself from the rest of the field as Mike Franz and Richie Pratt, Jr. battled for second.  Pratt took the runner-up spot on lap six with the Danny’s Pizza Pizzazz No. 51 but was challenged by Franz several times during the event.  Neal Wiliams raced into fourth by half way.  It was the fifth place spot that saw the most heated competition as Manning, Ryan Anderson and Brett Ballard raced three wide for the position.
At the end of twenty-five laps, it was Pauch who led Pratt, Franz, Williams and Ballard to the checkered flag.  Anderson, Manning, Dominick Buffalino, Ryan Watt (who raced his way through the field after a mid-race flat) and David Hunt completed the top ten in the running order at the checkered flag.
Pauch talked about the racing on the 3/8th mile.  “It’s just a matter of getting used to it and getting set-up for it,” Pauch explained.  “It sure is easier on the motors.” noting that there were no engine issues on this race night as compared to other races on the 5/8th mile track.
Wayne Weaver led the first lap of the South Jersey Overhead Door 602 Crate/Sportsman feature event last week before the rain forced the cancellation of the remainder of the show.  Weaver picked up where he left off one week earlier and led every lap to capture the held-over event, his first win on the 3/8th mile surface.  “It’s neat to win on this track,” Weaver commented following his win.  Steve Kemery finished second followed by Jim Gallagher, Matt Peck and Andrew Belmont.
In the second 602 Crate Sportsman feature event, Eric Kormann put an end to his winless streak, taking the win in the twenty lap event.  “I was one of the biggest critics of this track,” Kormann exclaimed from Victory Lane, “And here I sit in Victory Lane!”.  It was Kormann’s first win on the Design for Vision/Sunglass Central surface and his first Bridgeport victory since July of 2016. Weaver finished second followed by Rich Wenger, Matt Peck and James Hill.
Rich Stinson, Jr. led the first four laps of the Sunbelt Rentals Outlaw Stock feature event before Tom Wills, Jr. won the challenge for the lead on lap five.  Wills led the rest of the way with Stinson finishing second.  Gary Klimeczak crossed the line in third with Brian Ludwig and Billy Wrobel rounding out the top five.
Justin Moench was the winner in the DA’s Auto Body & Repair Rookie feature event.  It was Moench’s second win of the season but first on the 3/8th mile track.  Scott Maher, Jr. finished second with Jonathan John taking third.
The Xcel 600 Modifieds made their first appearance on the Design for Vision/Sunglass Central 3/8th mile track.  Polesitter, Sam Sciccitano led all twenty laps to capture the win over Brian Blankenbiller and Matt Warner.
Racing returns to Bridgeport’s Design for Vision/Sunglass Central Speedway when the World of Outaws NOS Energy Sprint cars come to town on Tuesday evening for a doubleheader with the South Jersey Overhead Door 602 Crate Sportsman.  Racing gets underway at 7:30.   Then it’s the All American 40 on Sunday for the second hand of the 2019 Poker Series, featuring the Big Block Modifieds, 602 Crate Sportsman, USAC East Coast Wingless Sprint Cars and 8 Cylinder Enduros with racing getting underway at 7pm.