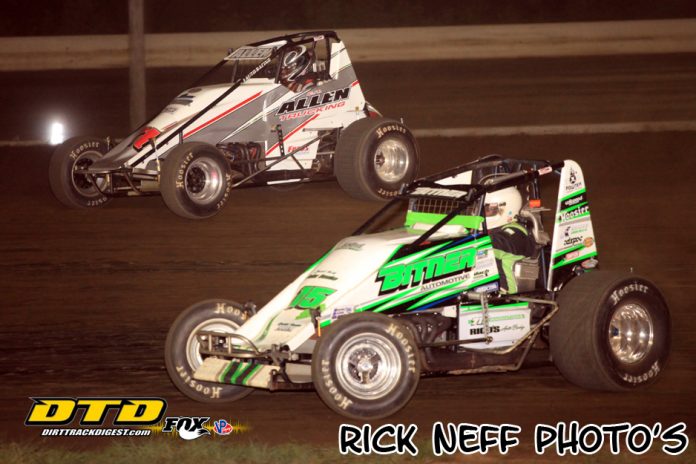 SWEDESBORO, NJ – You won’t need a weather map for this storm!

The Eastern Storm is headed to the Design for Vision/Sunglass Central 3/8th mile track at the Bridgeport Speedway on Wednesday, June 12th.

Last year’s event was a huge success. The drivers found the track “racey”. The fans came in droves for the only appearance of the stars of USAC in the state of New Jersey and they did not go home disappointed. In the words of USAC’s Levi Jones, “There was a good crowd who got to see the greatest names in USAC. You can’t ask for it to be much better than that!”

At the end of the night, Kevin Thomas Jr. was the first to the checkered flag after laps of wheel to wheel racing with Chris Windom and Tyler Courtney. Windom and Courtney had swapped the lead back and forth. When the two made contact, Thomas saw his chance and raced into the lead. It was just the opportunity that he was looking for.

So far this season, Chris Windom is the only driver to have repeated in the win column but it is CJ Leary who sits on top of the point standings , currently 29 points ahead of Kevin Thomas, Jr. and 38 points ahead of Windom. Justin Grant, Leary, Brady Bacon, Tyler Courtney and Chase Stockon have one win a piece coming into the Eastern Storm races.


In addition to the regulars on the USAC tour, race fans will be able to see several local drivers competing in these events.

Joey Biasi recently picked up the win in the USAC East Coast Wingless Sprint Car event on the Design for Vision/Sunglass Central 3/8th mile. Biasi has made it no secret that he really likes this track and his record shows it. In two events, Biasi has a win and a second place finish.

Biasi is not stranger to Eastern Storm competition. He has competed in these event for several years because, as the driver explains, “You don’t have to have a million dollar engine to compete. Wingless competition is more about the driver driving the car.” Biasi’s sponsors are on board for the Eastern Storm, including B&F General Machine, Burns & Yost Engines, GME Steering, Calaman Radiator, Frank’s Truck Lettering,k HG Block Lightning and Dyno, Larry’s Hot Rod & Harleys, Blinders restaurant, Shaup Brothers and Tito Juice. These sponsors are very important to Biasi for monetary as well as product support.

Drevicki is receiving support from Gene Frankowiak who is supplying the engine. Drevicki will also be receiving some technical support from Clauson & Marshall in what will be his first endeavor in Eastern Storm competition. Drevicki will be using the same car that he uses in wingless competition. He and his team have already done all of the prep work to allow them to change engines with relative ease. Drevicki will attempt to get some practice laps with the 410 motor this week. He will change motors to compete at Big Diamond on Friday night and will then have several days to prep for the Eastern Storm opener at Grandview on Tuesday.

A former two time ARDC midget competitor, Drevicki believes that the car with the 410 power plant will react more like the midget than the 360 sprint car so he isn’t expecting the change to be a big adjustment.

With the exception of the last event scheduled at Weedsport, the local talent has considerable experience in the tracks that will run during the Eastern Storm.

Grandstand admission for this event is $30, $10 for students 10-15 years old with children 9 and under admitted for Free. Racing will get underway at 7:30pm.

We are Bridgeport – the only track in New Jersey to offer Big Block Modifieds; we are committed to maintaining a safe, fun, family atmosphere, creating life-lasting memories of excitement.