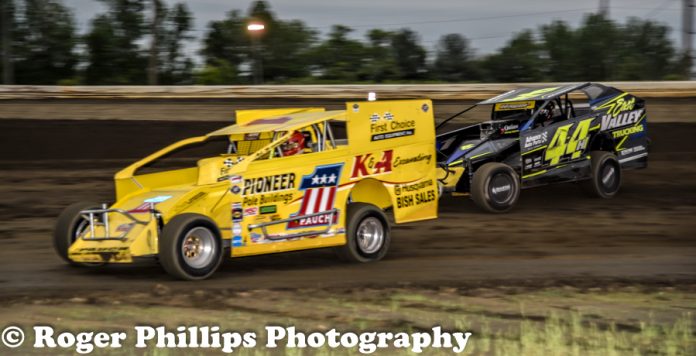 BRIDGEPORT, NJ – Billy “The Kid” Pauch charged to his fourth win of the season in Spirit Auto Center Big Block Modified action at the Bridgeport Speedway and his third win of the year on the Design for Vision/Sunglass Central 3/8th mile track. Rich Wegner Jr. picked up the win in the South Jersey Overhead Door 602 Crate Sportsman – his first ever victory in a stock car. Rich Stinson Jr’s last lap challenge gave him the victory in the Sunbelt Rentals Outlaw Stock main event while Lee Allen repeated in the 8 Cylinder Enduro competition. Justin Moench claimed his third win in the DA’a Auto Body & Repair Rookie feature.

Saturday night marked the final scheduled Saturday night event on the Design for Vision/Sunglass Central track as Saturday night action switches back to the 5/8 mile next week. Pauch won three of the five Big Block Modified races with Jimmy Horton and Ryan Watt with one win a piece. The 602 Crate Sportsman had six main events on the 3/8th mile with Eric Kormann taking two wins while Wayne Weaver, Matt Peck, Jim Gallagher and Rich Wegner each won a single feature event.
Tom Wills and Rich Stinson each earned a single victory in Outlaw Stock competition while Lee Allen collected two win and Scott Riggleman won once in 8 Cylinder Enduro competition.

Pauch started fifteenth in the twenty-five lap Big Block Modified contest that saw Dominick Buffalino take the lead in the early laps over Kyle Borror. Both drivers raced cars that represent a lot of Bridgeport family history with Buffalino wheeling the Horton No. 76 and Borror behind the wheel of the Pratt No. 28.

Pauch quickly drove into the top five and then began to pick off positions one by one. He battled side by side with Borror following a lap seven restart and then moved in to challenge Buffalino. When the field raced to the start finish line on lap nine, Pauch was the race leader.

Neal Williams used a slide job to take over second from Buffalino on lap eleven. Buffalino tried to retake the spot but it was Watt who took over not only third but second just before the halfway mark. The next restart saw Williams race back into second as Pauch led Williams, Matt Stangle, Watt and Richie Pratt, Jr. with ten laps to go.


Pauch was able to drive away from the competition while driving to his fourth win of the season. Watt raced his way to a runner-up finish followed by Williams, Stangle and Pratt. Jim Britt, Ryan Anderson, Tommy Beamer, Brett Ballard and Bill Lasko finished in sixth through tenth at the end of twenty-five laps.

Polesitter, Bobby Bracall took the lead at the wave of the green flag for the 602 Crate Sportsman twenty lap feature event. Bracall led the first two times around the 3/8th before Wegner took the lead after a lap three caution. Wayne Weaver raced into third and the top three remained unchanged to the checkered flag.

The fourth and fifth positions attracted a lot of attention. Eric Kormann raced Andrew Belmont to take over fourth just before the half way mark. Matt Peck arrived on the scene to challenge Belmont for fifth with Peck winning the spot.

Earlier in the evening, Justin Moench drove the Wegner No. 304 to his third win in the eight lap Rookie feature over Jim VanWickle and Kathy Buzby.

Mike Creamer took the lead at the start of the fifteen lap Outlaw Stock main event while Chris Allen, Jr., Gary Klimeczak and Brian Ludwig raced three wide for second. Allen was behind the wheel of his uncle’s No. 97.

After making an early race trip to the pits, Rich Stinson, Jr. raced his way back through the field, one position at time. With five laps to go, Stinson sat behind Allen in second. Stinson took over the runner-up spot with one lap to go and then drag raced Creamer to the finish line to take the win.

Stinson took the win over Creamer, Allen, Ludwig and Klimeczak with Jeff Dirkes racing the high line looking for a way into the top five.

For the second week in a row, Lee Allen took the win in the twenty-five lap feature event for the 8 Cylinder Enduro cars. Allen, Scott Riggleman and John Bronne raced nose to tail for many laps. Racing for the checkered, Riggleman gave it all he had as he challenged Allen for the win but Allen was able to hold off the challenge to take the victory over Riggleman and J. Bronne.

The Design for Vision/Sunglass Central 3/8th mile will host the Eastern Storm on Wednesday with racing starting at 7:30 pm. See the stars of USAC Wingless Amsoil Sprints battle it out wheel to wheel for the win. The Winged 600 Micro Sprints will join the USAC cars in a doubleheader. Next Saturday is Bike Night on the 5/8th mile track with the Big Block Modifieds, 602 Crate Sportsman, Outlaw Stocks and Rookies. Race time is 7pm.