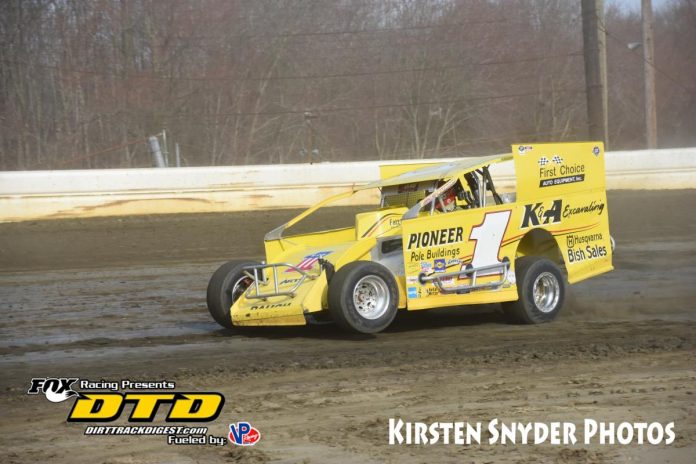 Billy Pauch raced to his fifth win of the 2019 season in the twenty-five lap Spirit Auto Center Big Block Modifieds in a race that saw five different leaders and too many lead changes to count! On lap nine, it was Pauch who drew the caution with a left rear flat. He made a trip to the pits and returned to start at the rear of the field, breaking into the top five with just ten laps to go.

Bob Sarkisian and Ron Roberts lead the starting line-up to the green flag with Sarkisian taking the lead. Sarkisian led the first six laps before Richie Pratt, Jr. raced by on lap seven in the Danny’s Pizza Pizzazz No. 51. Pratt led a pair of laps before Brett Ballard took to the outside on the backstretch to race into the lead for laps nine and ten. On a lap eleven restart, it was Pratt who took to the outside to take the lead.

There was plenty of action happening behind the leader as Ballard. Ryan Watt and Neal Williams battled for position.

Then things got really interesting as Pauch raced into third on lap twenty-one. Watt challenged Pratt for the lead and led the way to complete lap twenty-two. It was a three car battle for the lead the next time around with Pauch taking over on lap twenty-three. Pauch was able to pull away from the field, leaving Pratt and Watt to race for second. Pauch took the checkered followed by Watt, Pratt, Williams and Ballard. Jim Britt finished sixth with Roger Manning, Matt Stangle, Travis Hill in the Michael No. 51M and Sam Martz completing the top ten at the end of twenty-five laps.

Former Rookie Champion, Matt Peck raced to his second win of the season but first on the 5/8th mile track in the South Jersey Overhead Door 602 Crate Sportsman competition.

Peck led all twenty laps and spent most of them deflecting the challenges of a very persistent Wayne Weaver who ran in second. Jim Gallagher, Jr. battled back to finish third after a back and forth battle with Sammy Martz, Jr. who was sidelined with mechanical issues on the final lap of the race. Current point leader, Eric Kormann raced to a fourth place finish with Travis Hill rounding out the top five. Ernie Miles III finished a season best sixth followed by David Hartman, Andrew Belmont, Bobby Bracall and Brett Belmont.

Rookie graduation took place behind the grandstands before the start of the Saturday night competition.

Tom Wills, Jr. picked up his fourth win of the season in the Sunbelt Rental Outlaw Stocks, taking the lead with an outside pass by Brian Ludwig on a lap seven restart.

Andrew Joslin led the first four laps before Ludwig took over on lap five in a race that saw numerous caution flags during the fifteen lap event.

Wills led the way to the checkered flag with Ludwig finishing second. Lee Allen rebounded from several incidents to finish third followed by Joslin and John Parker to round out the top five.

Bridgeport action returns next Saturday for Bike Night on the 5/8th with the Big Block Modifieds, 602 Crate Sportsman, Outlaw Stocks and Vintage cars with racing getting underway at 7pm. 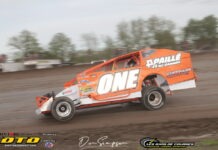 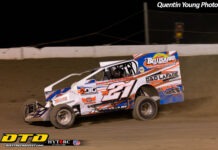 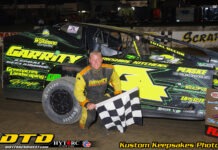