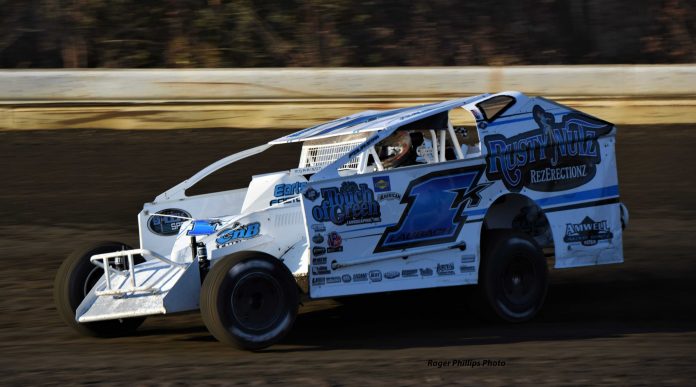 BRIDGEPORT, NJ – The Bridgeport Speedway ran its final race of the 2019 season and the final race on the 5/8th mile speedway to conclude the Wild Card Weekend sponsored by K&A Excavating. Pre-race ceremonies paid tribute to Shirley Laubach, the mother of Rick Laubach, and Ken Golden, Sr. – both of whom has passed away in recent weeks. Track owner, Brian Ramey thanked the fans and the competitors for their support over the years and recognized the efforts of his management team that included Keith Hoffman, Danny Serrano and Dave Adams as well as Ramey’s son and daughter, Kolby and Hali. It was his last act as the owner of the Bridgeport Speedway as he turned the reins over to Bridgeport’s new owners, Brittany and Doug Rose. While it was the final day for the 5/8th mile surface, Rose will bring a fresh approach to the Bridgeport Speedway with his plans to construct a half mile speedway in time for the 2020 season.

Craig VonDohren and Jeff Strunk were the fast timers in Saturday night’s Big Block timed hot laps. Both drivers earned a redraw spot for Sunday’s main event. VonDohren drew the outside pole followed by Strunk who drew the pole. The front row of the starting line-up saw the pair of ten time Grandview Champions line up side by side.

Strunk jumped out to an early lead with the Hynemann No. 126 with Dominck Buffalino taking over second on the start. Ryan Watt drew a caution on lap three as he slowed with a flat tire. VonDohren regained the runner-up spot on the restart as Laubach raced Buffalino for fourth.

By lap five, Strunk led VonDohern and Laubach as the three lead cars began to pull away from the field. When VonDohren slid up the track on lap nine, Laubach was there to move into second. Strunk led Laubach, VonDohren, Buffalino and Billy Pauch through lap ten.

The running order remained unchanged through lap fifteen as Strunk began to pull away from the field. Mike Maresca moved into the top five on lap nineteen. The upstate New York driver made a stopover in Bridgeport as his team headed home to upstate New York following a third place finish in Charlotte the night before. It was only Maresca’s second time at Bridgeport but he continued to run well.

As starter, Ken Golden, Jr. waited with the crossed flags, Laubach made his move to the outside, taking the lead from Strunk. Laubach led Strunk, Von Dohren, Maresca and Brandon Grosso through the halfway mark.

Laubach used the outside line for a lap twenty-one restart that saw Maresca move into third as Watt challenged Grosso for a top five position.

With just over ten laps to go, Strunk began to close the lap on the race leader until the No. 126 began to show some smoke. Laubach again pulled away from the field. VonDohren pull off the track just before the five to go mark.

Wayne Weaver picked up where he left off the night before as he captured his fourth South Jersey Overhead Door 602 Crate Sportsman feature event of the season.

Rich Stinson, Jr. raced to his eighth victory of the season in the Sunbelt Rentals Outlaw Stocks. Stinson didn’t make it easy on the competition when he drew the pole for the fifteen lap main event.

Stinson’s biggest challenge came in the form of 2019 Champion, Tom Wills, Jr. who spun while challenging Stinson for the lead on lap nine.

The win gave Stinson his fourth Ace and the 2019 Poker Series title for the Outlaw Stocks. 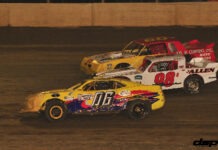