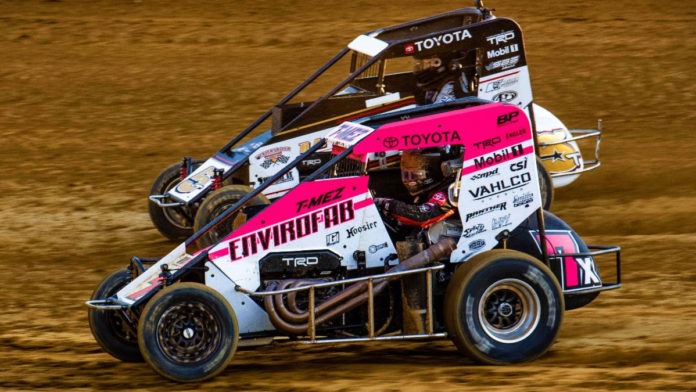 BRIDGEPORT, NJ – It’s been 31 years since the USAC NOS Energy Drink National Midgets have visited the Garden State of New Jersey, but this coming Thursday, August 6, the three-plus decade hiatus comes to a close as the highly-competitive series makes its debut at Bridgeport Speedway for round three of Eastern Midget Week, the first time the mini-series has ventured outside of the state of Pennsylvania in its six year history.

USAC series have competed at the track in recent years with Bridgeport hosting the Eastern Storm tour for the AMSOIL National Sprint Cars in both 2018-19 as well as the Rapid Tire East Coast Sprint Cars in that same time frame.

For those individuals who’ve competed with the national series at Bridgeport over the last couple of seasons, they will be greeted by a newly reconverted 4/10-mile dirt oval. Those past events have been held on the former 3/8-mile dirt oval which was located inside of the now-defunct 5/8-mile dirt track.

With that said, all past experience at the track is out the window with the new layout. However, a handful of name drivers do have experience, and their share of successes, at Bridgeport in its previous iteration.

Kevin Thomas Jr., who’ll be competing for Heffner Racing throughout Eastern Midget Week, was the fastest qualifier and the winner of the USAC AMSOIL National Sprint Car debut at Bridgeport in 2018. The Cullman, Ala. driver followed up with a runner-up finish during his last series visit in 2019.

USAC NOS Energy Drink National Midget point leader Chris Windom led 11 laps and finished 2nd after his involvement in a memorable back-and-forth tussle throughout the 30-lap distance between he, Thomas and Tyler Courtney, all of whom will be competing throughout the entirety of Eastern Midget Week. Windom, the 2016 USAC Silver Crown and 2017 AMSOIL National Sprint Car champion from Canton, Ill. collected an 8th place finish at Bridgeport in 2019.

Justin Grant has been tabbed as the driver of the Petry Motorsports No. 5 throughout Eastern Midget Week. The current USAC AMSOIL National Sprint Car point leader from Ione, Calif. finished 8th in 2018 before upping his performance to a 3rd in 2019 in USAC Sprint competition at Bridgeport.

Thomas Meseraull (San Jose, Calif.) is always a thrill show at any venue he participates. Twice a non-point special event winner with the USAC Midgets, Meseraull made a charge during his debut at Bridgeport in a sprint car during Eastern Storm 2018, cutting through the field to 9th after starting 18th on the grid.

Steven Drevicki (Reading, Pa.) just this past week reigned victorious in a USAC SpeedSTR feature at Bridgeport by about a foot on a last lap, last corner pass for the win. The two-time USAC Rapid Tire East Coast Sprint Car champion also owns two career top-five finishes with the series there, a 2nd in 2018 and a 5th in 2019. During Eastern Storm at Bridgeport in 2019, Drevicki collected a 12th place result.

USAC’s National Midget history dates back more than six decades ago when 1957-58 Indoor Midget champion Chuck Rodee scored a 100-mile victory at the Fairgrounds in Trenton. The longest midget races in USAC history took place in the state of New Jersey in 1959 and 1960 when Jiggs Peters and Bobby Marshman/Jimmy Davies each won 250-mile races at Trenton, respectively. The Marshman/Davies combo win was the only time in series history that two drivers were credited with a shared victory.

Seven of New Jersey’s previous 14 USAC National Midget events have been held at Trenton, with two at Wall Stadium in 1963, the first night of which was won by Parnelli Jones, who was fresh off his Indianapolis 500 win. Old Bridge Speedway hosted the series in 1964 while Flemington Speedway was the venue for the three most recent in 1971-86-89, the final two of which were won by John Heydenreich, who remains active as a driver to this day.

The Foley Cat Modifieds will also be on the event card. Pits open for Bridgeport at 3pm Eastern with front gates opening at 4:30pm and hot laps at 6pm.

General admission tickets are $28 for adults, $15 for kids age 10-15 and free for kids age 9 & under. Pit passes are $35 apiece. Tickets can be purchased at the gate or on www.bridgeportspeedway.thundertix.com.

Thursday’s Grandview event will be aired live on FloRacing at https://bit.ly/2Zs7zFP.