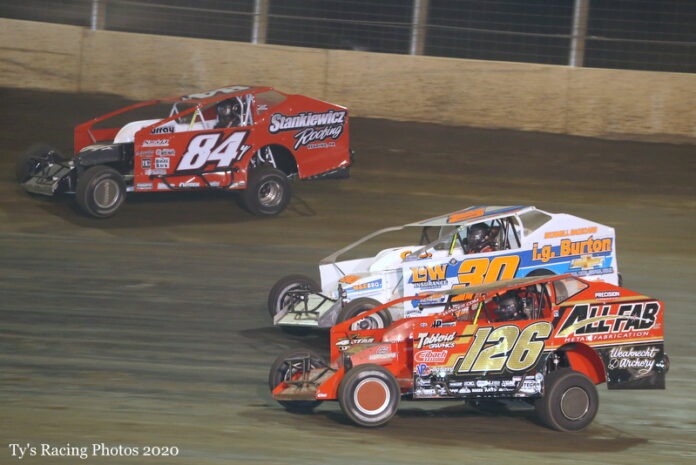 ABRIDGEPORT, NJ –  Alex Yankowski picked up a career victory on Saturday night at the Bridgeport Speedway in the Danny Serrano Memorial 100.

Ryan Krachun and Jimmy Horton led the modified starting field to the green flag, with Horton jumping out into the early race lead after Ryan Krachun got into the wall.  Unfortunately for Krachun, things didn’t get any better as he would slow with problems from that contact on lap 3, causing the first yellow flag of the event.

When the green flag was displayed again, Jojo Watson was able to push past Horton for the race lead.

A yellow on lap 17 for a slowing Dominick Buffalino would bring the field together, but as the green flag flew it was Watson who maintained the lead.

Through the first quarter of the race, the man on the move was Ryan Godown.  Godown had started back in the 25th position and at the 25 lap mark had worked his way into the top five.

The battle for the lead quickly intensified with Mike Mahaney now mounting a challenge for the top spot, but he’d have to hold off a hard charging Danny Bouc.  By lap 36 there was a 4 car battle for the race lead between Watson, Bouc, Godown and Ryan Watt.

With lapped traffic making things interesting for the leaders, Danny Bouc was able to snag the top spot away from Watson on lap 41 with Ryan Godown and Ryan Watt moving into 2nd and 3rd.

On lap 57 the yellow flag would fly for Duane Howard, who slowed with a right rear flat tire.  Eventual race winner Alex Yankowski was 10th at the time of the yellow.

As the green flag flew once again Ryan Godown was able to work past Bouc for the top spot, with Watt challenging for the 2nd position.  Meanwhile, Yankowski was making was way through the top 10 and pressured Billy Pauch for 5th by the races 68th circuit.

The yellow flag on lap 73 was exactly what Alex Yankowski needed as it brought him right to the back bumpers of the leaders with only 27 laps remaining.  Once the race got underway Godown jumped out to the lead but Yankowski was right there with him, eventually taking away the top spot from the Godown machine.

The race was not over from there though.  Yankowski would need to fend off a challenge from Ryan Watt, who applied pressure to the 84y machine on lap 85, but Yankowski stayed cool under pressure and eventually pulled away to the victory.

Ryan Watt finished in the runner up spot, with Ryan Godown, Danny Bouc and Jeff Strunk completing the top five.

That wasn’t it for the excitement.  Yankowski tangled with a lapped vehicle after taking the checkered flag causing him to flip wildly down the front stretch (He was okay).