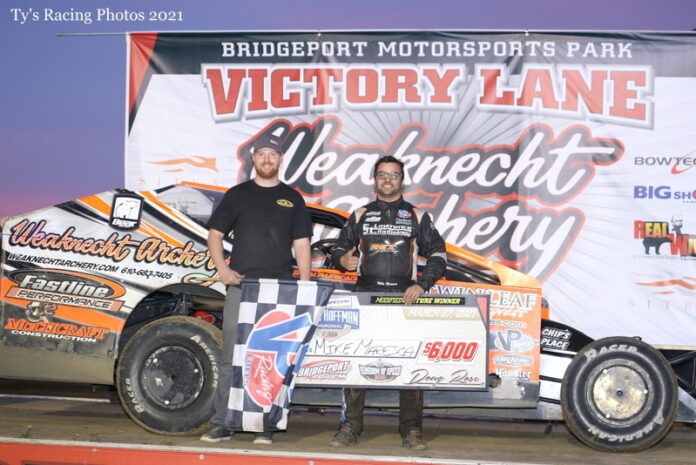 BRIDGEPORT, NJ – Mike Maresca picked up where he left off at the end of the 2020 season. His season ended with a win in the final show at the Bridgeport Motorsports Park during Wild Card Weekend. The Potsdam, NY driver returned for the Kingdom of Speed Weekend sponsored by Millville Glass and Door and again walked away with a win – this time in the sixty lap Doug Hoffman Memorial.

Sammy Martz, Jr. got his 2021 season off to a good start when he raced 2020 South Jersey Overhead Door 602 Sportsman Champion, Steve Kemery for the win in the twenty lap feature event.

Ryan Smith put the Specialty Rigging No. 10x in Victory Lane as the United Racing Club (URC) opened their 2021 season at the Bridgeport Motorsports Park. URC celebrates their 74th season of competition this year.

The start of the new season meant the return to three and four wide racing and slide jobs in all divisions as the fans were treated to some great racing during this first weekend of 2021.

When asked what made him so good on the high banked 4/10 mile track, Maresca responded, “That’s I good question!” He may not know what makes him so good but the fact remains that he is very good. His weekend was nearly perfect. Ryan Krachun and Maresca were the two fast timers that transferred into Saturday’s main event after setting fast time in timed hot laps on Friday night.

As the winner of the six lap Dash, Duane Howard started on the pole of the Doug Hoffman Memorial with Mike Mahaney starting to his outside. Howard grabbed the lead on the start as Joseph Watson took over second. Howard led until a lap six restart when Watson took the lead. Howard regained the lead from Watson on lap twenty but the Big Creek Concrete No. 15G was showing some smoke. One lap later, in a plume of heavy smoke, Howard pulled off the track. Maresca, who had just taken over second, became the new leader.

Watson, Mahaney, Frank Cozze and Ryan Godown trailed Maresca. Cozze took over third on a lap twenty-three restart and got by Watson for second on the next circuit.

The top five remained unchanged through halfway but Mahaney was starting to make moves through the top five. Following a lap thirty-two restart, Mahaney, Watson and Billy Pauch, Jr. took it three wide while racing for position. Mahaney took over third on lap thirty-four. With twenty to go, Cozze was on Mahaney’s radar. Five laps later, Mahaney raced in second.

A lap forty-five restart shuffled several spots around as Mahaney continue to chase down Maresca but now Godown, Pauch, Jr. and Cozze ran third through fifth.

As the laps counted down, Mahaney closed in on the leader and looked to make his move. “I took a look at Mahaney’s tires on that one restart,” Maresca explained, “and they looked pretty beat up.” Mahaney was confident though, that he had enough tire left to challenge for the lead.

On the final lap, Mahaney made a big crossover move going into turn three to take the lead but Maresca came right back. The two drivers raced for the win out of turn four with Maresca winning the drag race to the checkered. Maresca admitted that he was kind of taken by surprise by Mahaney on that last lap but “not really. Mike is one of the best right now,” the race winner said of the challenger.

Sammy Martz, Jr. led every lap from the green to the checkered in the South Jersey Overhead Door 602 Sportsman feature event but Steve Kemery kept it interesting on the restarts.

Kemery had his hands full with another young driver in the name of Kyle Smith who pressured the 2020 track champion has the laps counted down.

Ryan Smith took the green flag in the twenty-five lap URC sprint car feature event with the intent of being a ‘start and park’ car if he wasn’t able to advance from his fifteenth place start. However, that notion was quickly erased as Smith raced into the top five in just five laps and then took over second on the next circuit.

He immediately challenged race leader, Brian Carber, and the two put on a tremendous display while battling for the lead. Following a lap eight caution, Smith took the lead for good and never looked back as he pulled away from the field.

There was plenty of action in the top five throughout the race as Denny Peebles, Andy Best, Dallas Schott and Jason Schultz battled along with Carber for position.

Smith took the win – his first on the high banks of the 4/10 mile track followed by Best, Schott and Schultz with Derek Locke racing into fifth in the closing laps. Carber ended up sixth followed by Paulie Colagiovanni, Alex Bright, Josh Weller in the Hogue No. 39 and Denny Peebles.

Smith also picked up the $300 Hard Charger Award presented by Diane Pursell in memory of her brother, Scott, a former URC competitor who passed away earlier this year.