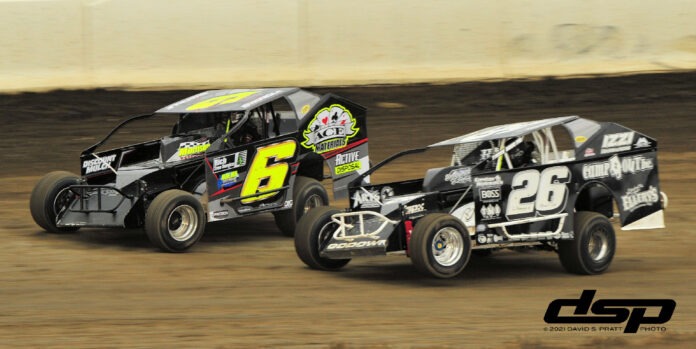 BRIDGEPORT, NJ – Ryan Godown raced to his fifth Bridgeport Motorsports Park victory of the season in the Foley Cat Modifieds on Church’s Auto Parts Night at the races. Kevin Nagy picked up his seventh win of the season – his fourth on Bridgeport high banks in Delaware Auto Exchange Mid Atlantic Sprint Series action. Tom Wills, Jr. came up with the win in the Bridgeport Motorsports Park Street Stock victory while Amanda Angstadt earned her third win of the season in the Saturday Matinee for the All Star Slingshots.

Mike Franz led the field of Modifieds to the green flag and led the way from the start. With two laps scored, the caution waved for Billy Pauch who slowed with a flat tire. Pauch pitted and returned for the green with Franz leading the way over Neal Williams, Tom Moore, Jr. and Joe Toth. Franz was on the gas and led through lap nine with Williams using a crossover move to take the lead on lap ten. Godown raced behind the leaders after clearing Alex Yankowski for third. Ryan Krachun ran in fifth on lap ten.

Williams led laps ten and eleven but it was Godown who used the momentum out of turn two to take the lead on a lap twelve restart. Yankowski took on Williams for second on lap thirteen while Dominick Buffalino and Ryan Krachun battled side by side for fourth.

Godown drove away from the field. The lightning fast No. 26 sponsored by Camp Out and Ellery’s Pub and Grill made it all look easy as Godown raced ahead of the field. Yankowski kept Godown within his sights but was never able to get to the leader. Buffalino raced back into third just past half way but was not able to close the distance on the top two. After a heated battle with Williams and Joseph Watson, Krachun finished fourth with Watson taking fifth. Williams finished a strong sixth followed by Sammy Martz, Frank Cozee, Franz and Billy Pauch who rebounded to a top ten finish after his earlier pit stop.


“We really had a good car tonight,” Godown explained. “It was better than it’s been the last couple of weeks.” Godown last visited the Weaknecht Archery Victory Lane in mid-June. “When you get to the front you can concentrate on hitting your marks and just keep rolling,” the feature winner added. “You don’t have to worry about traffic.”

Kevin Nagy has been on a roll and is having a great 2021 season to date. After polesitter, Aidan Borden slowed before taking the green, it was Cody West who led the field to the green flag on the complete restart. Dave Brown quickly closed in and raced into the lead on lap one.

Brown led the way through lap nine. The races was red flagged when Zac Vickers tangled with another car on the homestretch and flipped. Vickers was transported to the local hospital for treatment for a leg injury.

The restart saw Nagy on Brown’s back bumper and then into the lead for lap eleven. Two laps later, the race was again red flagged when West made hard contact with the second turn wall after a part failure. West was not injured but the Kennedy No. 56 was heavily damaged.

Nagy, Brown and Ryan Stillwaggon made it a three car race for the lead with Nagy pulling away after the restart.

After an engine failure just a few weeks ago, two time Street Stock Champion, Tom Wills, Jr. thought his 2021 season was over but friends through racing came to his aid and Wills repaid them with a feature win on Saturday night.

Wills led from the start but when the caution was needed on the last lap, Wills had last week’s winner, TJ Henry on his back bumper. Wills had a good start and then won the drag race off of turn four to capture his fourth win of the season. Henry finished a close second followed by Jeramy Doerr, Jeff Dirkes and Ron Frees. Frees, a former track champion, returned to Bridgeport to prepare for the Street Stock Nationals being presented on the high banks later this season.

Amanda Angstadt took the lead from Michael Beckett on a restart with eight laps complete. Once out in front, Angstadt had little trouble keeping the lead. Angstadt took the win over Beckett, John Phillip, Ryan Davey and Dave Morrell.