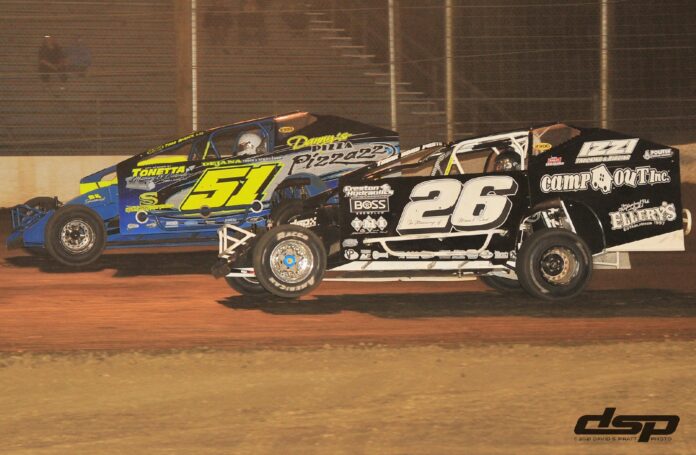 SWEDESBORO, NJ – While there is still plenty of racing left to be run in the 2021 season at the Bridgeport Motorsports Park, there are only three race dates left before the 2021 Champions are crowned on Saturday, September, 11. 2021.

The Foley Cat Modifieds have three races remaining before Championship Night. Mathematically, all of the drivers currently in the top ten in points have a chance to be named as this year’s champion with each feature win valued at sixty points. One hundred and seventy-seven points separate current point leader, Ryan Godown and tenth place, Neal Williams.

While Godown has five Bridgeport wins, only three came during Saturday night point competition. Godown has a thirty-four-point lead over Alex Yankowski who has won the last two Modified contests on the high banks of the Bridgeport Motorsports Park. Only one of those victories came in a point contest but you cannot deny Yankowski’s recent momentum. Ryan Krachun who sits third in points has found his formula for success at Bridgeport after winning a race early in the season. Krachun is seventy-six-points behind Godown and thirty-eight points behind Yankowski.

Dominick Buffalino is currently fourth in points in his first season behind the wheel of the Hyneman owned, Big Spring Car Wash No. 126. Buffalino has two victories this season but is still searching for his first win in Saturday night competition. This would be a good time for Buffalino to get hot and eat up the ninety-eight-point deficit

Matt Stangle, Joseph Watson, Billy Osmun III, Sam Martz, Billy Pauch and Neal Williams complete the top ten in points – all are more than a hundred points behind Godown with three races remaining on the schedule. Only Osmun and Williams have not made the trip to the Weaknecht Archery Victory Lane this season.


The South Jersey Overhead Door 602 Crate Sportsman race shows the biggest point spread of the three Saturday night divisions. Sammy Martz, Jr. has four Saturday night wins and leads rookie, Matt Ellery by eight-four-points with three races remaining. Ellery just took over second place in the points with his second-place finish, capitalizing on Steve Kemery’s race back to eighth after a pit stop was needed to change a tire. Tom Sherby and Howie Finch round out the top five in points. Both drivers are winsless so far this season and are more than one hundred and fifty points behind the leader.

Ryan Godown, Jr has three wins and is sixth in points followed by Billy Chester, Rookie Champion, Ethan Bill, Travis Hill and Ryan Higgs. Only Hill has a win to his credit this season of the drivers currently in sixth through tenth in points.

Tom Wills, Jr. has won three races in a row to lead the Bridgeport Motorsports Park Street Stocks by forty points over Mike Hughes. Wills has a total of six wins but several DNFs have kept the run for the championship a close one. Mike Hughes has one win this season. Two-time feature winner, Jeff Dirkes and Jeramy Doerr share third in the points with just two races left on the 2021 schedule. Dirkes and Doerr are four points behind Hughes. Past Champion, Doerr is still looking for his first win of the season. Nick Sandone III is currently fifth in points, more than a hundred points behind Wills.

Who will the 2021 Champions be? Only time will tell! Will you be there when the 2021 Bridgeport Motorsports Park crowns the champions!