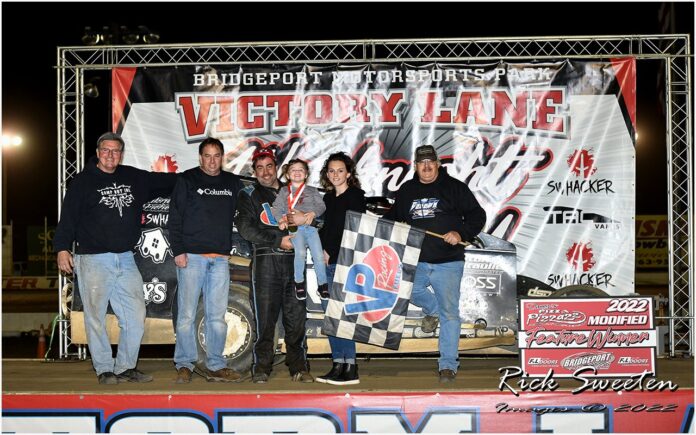 The win for Godown was a tough one. “I didn’t think I was going to get there in time,” the defending track champion said after the win. Godown led only the final two laps of the thirty lap feature.

Jordan Watson and Davey Sammons led the starting field to the wave of the green flag and Sammons quickly claimed the lead as the field raced out of turn two. Dominick Buffalino dove to the inside of Watson in turn three and came away with second the Danny’s Pizza Pizzazz Modifieds headed to the stripe to complete lap one. Sammons continued to lead through lap five with Buffalino, Jordan Watson, Jim Gallagher and Ryan Watt racing in the top five.

Buffalino drove the Big Spring Car Wash No. 126 into the lead on lap six and wasted no time driving away from the field. The running order remained the same through lap ten as the leader caught up to the back of the field.

With each lap, Buffalino seemed to extend his lead as the top five remained the same. Ryan Godown, Billy Pauch, Jr. and Richie Pratt, Jr. were wheel to wheel, using the track’s multiple lanes to better their positions, looking to break into the top five. Buffalino took the crossed flags over Sammons, Watson, Gallagher and Watt while Neal Williams and Godown raced just outside the top five.

Williams picked up a spot as he raced by Watt just before the caution waved for the race leader. Buffalino’s night ended as he came to a stop on the homestretch with mechanical issues and Sammons led the way back to the green flag.

Williams and Godown raced up to second and third on the lap twenty restart with Watson and Pratt completing the top five. Godown took over second with Sammons next on his radar. Five laps to go and Sammons raced out in front of Godown, Williams, Pratt, Jr. and Watson.

Time was running out for the defending track champion as Sammons led the way. With two to go, Godown took the lead, shooting by Sammons out of turn two. Williams raced Sammons door to door to the checkered and picked up a second place finish with Sal DeBruno’s No. 0. Sammons finished third followed by Pratt and Watson. Pauch, Jr. finished sixth followed by Watt, Joseph Watson, Clay Butler and Alex Yankowski behind the wheel of the iconic Rio Brothers R10.

It was a satisfying race for Williams. “We’re right there – we’re good,” Williams stated at the end of thirty laps. It was a learning experience for Sammons who has collected a number of runner-up finishes at Bridgeport but that first win still eludes him. “We knew we weren’t going to our best at the end,” Sammons related, “but we have to learn.”

It hasn’t been an easy start of the 2022 season for Brian Papiez. A flat tire deprived him of a win during the opener. Wednesday night the No. 37 team changed a driveline between the heat and feature. But that led the team to take a closer look and it all paid off with a win on Saturday night.

2021 DA’s Auto Body & Repair Rookie Champion, Ethan Bill led the first seven laps of the Precision Hydraulics & Oil 602 Sportsman feature. Papiez got by on a lap eight restart. Ryan Godown, Jr. raced in third and challenged Bill for second but Bill was not to be denied as he raced to the checkered behind Papiez. Godown, Jr. finished third followed by Sammy Martz, Jr. and Wayne Weaver. Howie Finch finished in sixth followed by Travis Hill, Stephen Yankowski, Jim Dallett and Matt Ellery.

In a true show of sportsmanship, Nick Sandone came to the rescue at the end of the week when Hughes discovered that he had a broken brake rotor. Hughes knew that it wasn’t likely that the part would arrive in time for the weekend and placed a call to Sandone. Hughes knew that Sandone had a new rear assembled to go into his car. Sandone generously offered the rotor to Hughes and the No. 18 raced to its second win of the season.

Chris Carroll drove to the checkered in the twelve lap Four Cylinder feature for his first win of the season. Bobby Johnson was the race leader for the first five times around the high banks. Carroll took the lead and lap six land led the way to the checkered. Joe Garey, Jr. finished second followed by Scott Dunn, Chris Gall and Ed Ford.

The Rapid Tire USAC East Coast Wingless Sprints and Delaware Auto Exchange Mid Atlantic Sprint Series joined the Precision Hydraulic 602 Sportsman and the Bridgeport Street Stocks for Saturday night action. The Danny’s Pizza Pizzazz Modifieds are idle on Saturday night as the prepare for the King of the Big Blocks/Super DIRTcar event on Tuesday, May 3, 2022.