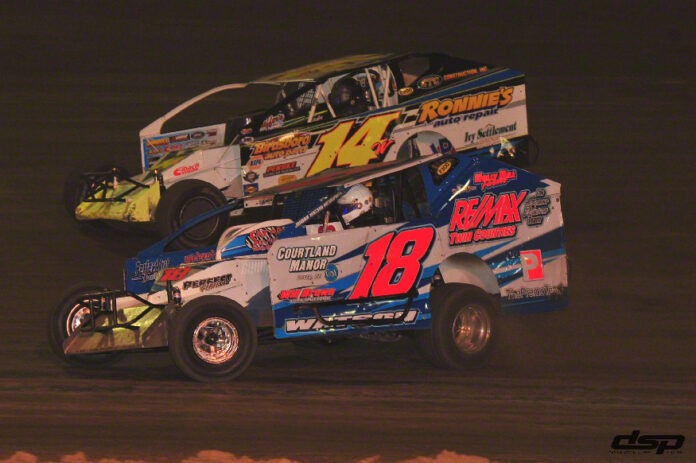 SWEDESBORO, NJ –  Boyertown, PA driver Ryan Watt has been the Bridgeport Track Champion on five different occasions including four big block modified titles on the original Bridgeport 5/8 mile speedway. The high banks of the Bridgeport Motorsports Park have challenged the multi-time champion – that’s no secret! However, his first Saturday night victory on Foley Caterpillar Night was the reward for a lot of hard work and dedication by Watt and his team. Good guys don’t always finish last!

“We’ve been fast here – we just haven’t had any luck,” stated the feature winner, as he recalled two race nights this season that he and his Ron Roberts No. 14w were simply in the wrong place at the wrong time.

Saturday night’s win was Watt’s first of the season and his first with the Troyer car that he built for the 2022 season. It’s been a work in progress that took a leap forward in Saturday night’s feature event.

Joseph Watson started outside of the front row of the Danny’s Pizza Pizzazz Modified feature event and grabbed the lead at the wave of Ken Golden’s green flag. After one false start, Watson had the new Blue Hen No. 30 out in front, running the high line around the high banks. As Watson completed lap five over Roger Manning, Matt Stangle and Jim Gallagher, Watt was battling with defending champion, Ryan Godown for fifth.

Watson led the field through halfway. Matt Stangle took the lead on lap sixteen and then Watson slowed with a broken drive line. The restart saw Stangle and Watt line up on the front row with Godown and Ryan Krachun one row back. Krachun had raced his way to fourth from his twenty-first place starting position.

Stangle took the outside for the restart but the caution quickly waved again for a multi-car incident that saw Ryan Godown head pitside with a flat tire. He rejoined the field for the restart.

Watt grabbed the lead as he and Stangle raced out of turn two. Watt immediately pulled away, leading Stangle, Krachun, Richie Pratt, Jr. and Danny Bouc with ten to go.

Billy Pauch, Jr. raced with Bouc for several laps before he was able to get by Bouc to take over fifth.

The field raced through lapped traffic in the final laps. Watt took the checkered over Stangle, Krachun, Pratt and Pauch. Bouc followed in sixth with Roger Manning, Davey Sammons, Jordan Watson and Billy Osmun III rounding out the top ten.

Godown, Stangle, Watson and Gallagher won the F&L Door heat races with Krachun picking up the win in the consolation.

Mike Hughes led the way in the Izzy Trucking & Rigging Street Stock feature. Hughes led the way through eight laps as he crossed the stripe side-by-side with Rod Ormsbee. The battle for the lead continued around the track. Contact was made in turns three and four. Hughes spun while Ormsbee was able regain control and continue. Tom Wills, Jr. was the new leader with Ormsbee restarting in fourth and Hughes restarting at the rear of the field.

Ormsbee raced into second on the restart and then took the lead for lap nine. Wills and Jeramy Doerr raced side by side for second with Lee Allen and Hughes rounding out the top five.

Doerr moved up to second before the caution waved when Drew Brocklebank spun in turn two. Doerr headed to the pits during the caution with mechanical issues.

Allen moved into second on the restart and this move would prove to be the move of the race.

Ormsbee took the checkered for the win but then failed post-race tech, moving Allen up to first. Wills, Jr. finished second followed by Hughes, Brocklebank and Nick Sandone.

Ormsbee was the winner of the Cenco Oil Street Stock heat race.

Thomas Prychka made it three in a row in the DA’s Auto Body & Repair Rookie feature event. Prychka led every lap to take the win over Mike Baldwin and Dan Hulmes.

Geoffrey Sutton was the winner of the Vahlco Wheels Xcel 600 Modified feature over Korey Inglin and Chris Fribal. Fribal picked up the win in the Hisko Lowboy heat race.

Wednesday night the Eastern Storm blows into Bridgeport with the arrival of the Amsoil USAC Wingless Sprints. Robert Ballou was the winner of last year’s event and will be here to defend that title along with the stars of USAC like Justin Grant, CJ Leary, Brady Bacon and Thomas Meseraull. Local stars like Briggs Danner, Alex Bright, Tim Buckwalter and Steven Drevicki will also be competing in this event.

This coming Saturday marks the first of three Saturday Night Rumble events. The Danny’s Pizza Pizzazz Modifieds will race in a 40 lap feature with $6,000 going to the winner. This race will be the Doug Hoffman Memorial Race which was postponed at the start of the season. The Precision Hydraulic & Oil 602 Sportsman, Street Stocks, 4 Cylinders and Rookies will all be a part of this big Saturday night show.