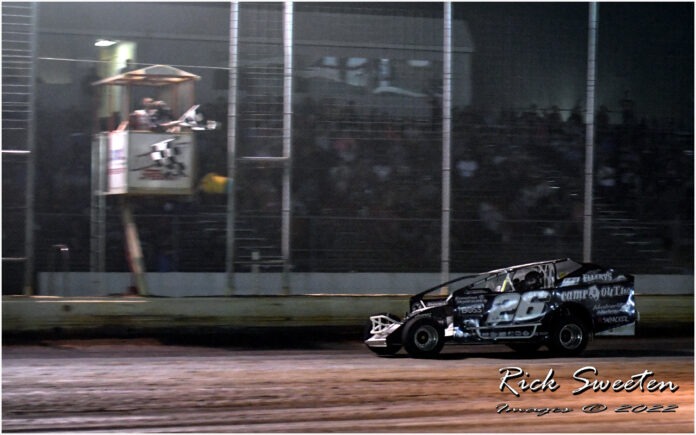 With a two week break for the modifieds on the horizon at Bridgeport Motorsports Park, this is a good time for the drivers and teams to regroup get ready for the stretch run coming up in August. One driver who for sure doesn’t want or need this break is Ryan Godown. Godown powered from his 13th starting spot to take the lead early in Saturday night’s 30-lap race to win his fourth consecutive feature at Bridgeport. The win pushed Godown’s 2022 season win total to eight at the 4/10’s South Jersey dirt oval.

“This car was awesome all night long, said a happy Godown while standing at his hauler after the race. “I was able to get to the right lanes early to get to where I needed to be. I then was able to get a good restart when I was in third, after that it was just a matter of me keeping the car straight for the rest of race.”

Godown has his car dialed in at Bridgeport and seems to be able to slice and dice his way through the field with relative ease.

“There is a happy medium that you have to have here at Bridgeport,” commented Godown. “You have to be tight enough, but you can’t be too tight, nor do you want to be too loose. We have seemed to have stumbled on something that keeps us on the realm of that. One of the other keys here is picking the right lines on the restarts because once you get going for a lap or two, it is hard to pass a guy again. You then have to run the down and slide but once you are in front you can run at your own pace and just keep the car as straight as possible.”

The Bicknell chassis that Godown has used for most of his wins here this season and the latter part of last season is ready to be replaced. The R&M Motorsports team has a fresh Bicknell chassis waiting in the wings but with the way things are going right now, the team is in no hurry to put this chassis to the back of the garage and pull out the new car.

“It’s funny, I told my brother Butch tonight that they have the track smooth now that we should bring out the new car,” explained Godown. “His answer back was you kidding me, this car is phenomenal. Between all of our sponsors, the Billy the Kid Performance powerplants and Bicknell chassis, it is really fun to drive right now.”

It is hard to find a time in Godown’s career where he has been so dominant at a single track. You can go back about a decade ago when he was the man to beat at New Egypt, but I do not remember a time where it seems like he has ever dominated a track like he does at Bridgeport.

“I don’t know if I have every had a year like this,” mentioned Godown. “I just always try to look at the next week ahead of us. You cannot get complacent in this sport because it will humble you really quick. Saying that, we are always looking to get a little bit better, a little bit faster. We are going to hot lap our big block car tonight after the sportsman feature and am looking to going to the SDS race at Big Diamond on Tuesday (now Wednesday) and put on good performance there.”

There has been some concern about the racing surface at Bridgeport the past few weeks and a few of the drivers aired their thoughts to track promoter Doug Rose. Rose held a meeting before the races Saturday night and apologized for the previous track conditions and promised that they will fix the situation going forward and Saturday night the track was in almost perfect racing condition.

“The track was awesome tonight, said Godown. “You have to give Doug and his guy’s credit. They took a track that hasn’t been the greatest the past couple weeks and turned it around. Tonight, it was very smooth and fast, and you could race all over it.” 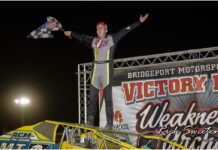