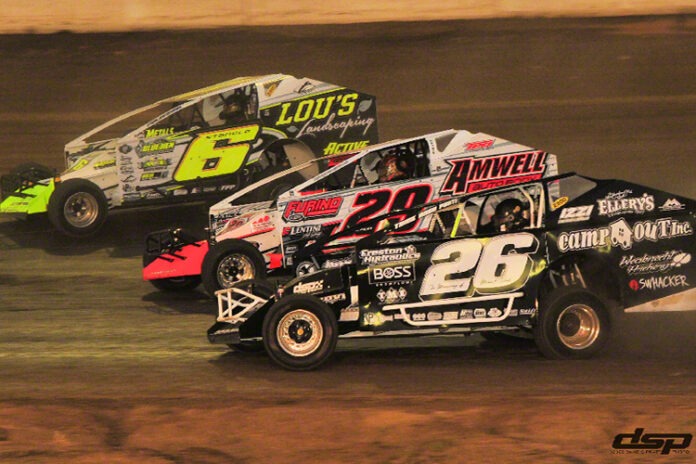 SWEDESBORO, NJ – ​The record stands at seven wins in a row as Ryan Godown and his R&M Motorsports Team continues their winning ways at the Bridgeport Motorsports Park. Win number eleven was an exciting one as Tommy Beamer had the Thornton Gulf No. 31 out in front for twenty-two laps and twelve of those laps were with Ryan Godown racing in second!

Brian Papiez raced the Adams Motorsports No. 37 to their third win of the 2022 season while Jeramy Doerr picked up his first win of the season in the Street Stock competition. Justin Dunn raced to the win in the Four Cylinder feature event.

The showdown at sundown was presented by Church’s Auto Parts.

While the rest of the racing world tracks the wins and the records, the bounties and the rewards, Ryan Godown continues to race one race at a time. “I really try to lock out the noise,” the defending track champion explained. “It’s hard!”

“He’s just that good,” Tommy Beamer said after turning in his best performance of the season. “I guess that’s how we should look at it – ‘it took him however many laps to get me,” Beamer added with a laugh. Beamer was a worthy opponent, holding off the pass for the lead until lap twenty-three. “I was a little tight and I didn’t want to run it in there too hard,” Beamer explained. “And that’s where Ryan gets you – he rotates those corners so good.”

Neal Williams just shook his head. He is determined get that Sal DeBruno No. 0 out in front. “I had my foot all the way to the floor,” Williams said after collecting his second consecutive third place finish.

With Beamer out in front from the start, Williams raced into second on lap two. Billy Osmun III and Ryan Krahcun battled for third with Brad Roberts rounding out the top five through the early going. Godown marched into the top five following a lap seven restart. He was racing Williams for second when lap ten was completed.

F&L Door heat races were won by Williams, Brad Roberts and Beamer with Mike Franz picking up the win in the consolation.

2022 Rookie Champion, Thomas Prychka led the first lap of the Precision Hydraulic & Oil 602 Sportsman feature in his last race before his seventeenth birthday. Papiez was the leader following a lap two restart. “You’ve got to get out there and run away and hide,” Papiez said after picking up this third victory of the season.

After many weeks of trying and getting close, Jeramy Doerr, finally, won the EZ Works Truck Street Stock feature for his first win of the season.

Doerr has been so close, so many times but on Saturday night, he finally put the Bill O’Brien owned No. 3:16 into Weaknecht Archery Victory Lane. Doerr dedicated this win to his mother who passed away earlier this season.

Racing returns to the high banks next Saturday night with the Modifieds, 602 Sportsman, Street Stocks and Xcel 600 Modifieds.