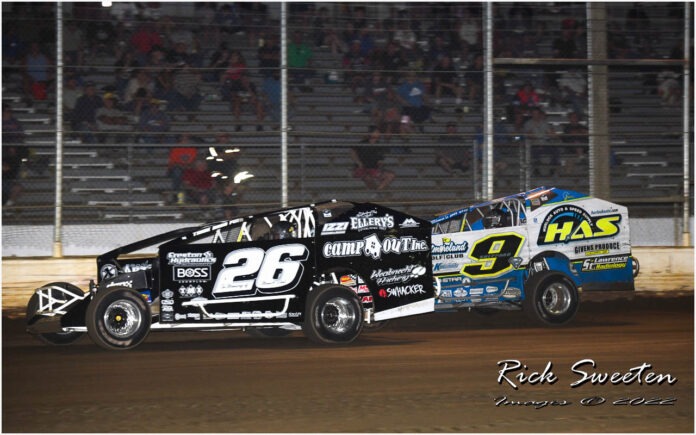 Only four weeks of racing remain in the 2022 American Racer Cup presented by Sunoco Race Fuels.

Ringoes, N.J.’s Ryan Godown has already locked himself into the maximum number of points attainable by a driver during the American Racer Cup Season.

A driver’s 10 best finishes at their American Racer home track from Friday, April 15 to Monday, Sept. 5 will be tallied. Bonus points are awarded to competitors at year-end, based upon the average number of cars starting feature events at their participating speedway.

Godown – having won a speedway record seven consecutive races at his registered home track of Bridgeport (N.J.) Motorsports Park – now has 10 wins to his credit this season at his home track.

With the bonus points added, Godown has reached the maximum 700 points. If his home track car count average remains above 24 cars, Godown will be guaranteed at least a share of the American Racer Cup championship.

Two other drivers appear in play for the 700-point maximum with four weeks left to go.

Craig Von Dohren, of Oley, Pa., currently has nine wins to his credit at Pa.’s Grandview Speedway, his registered home track. With one more win, Von Dohren will reach the 600-points along with his home track meeting the requirements for the 100 bonus points.

Sheppard, however, will need a boost in the Utica-Rome Speedway car count for the last month to receive the 100-point boost along with a 10th win.

Registered Modified drivers are competing for a $10,000-plus championship at the end of the American Racer Cup season. The cash point fund for the Modifieds totals $36,000 – distributed to the top-15 in American Racer Cup points – in addition to tire certificate giveaways throughout the season.

There is an additional $5,700 in regional money available to Modified competitors thanks to Insinger Performance of Dushore, Pa.

On the Sportsman side of the American Racer Cup, Utica-Rome Speedway’s Matt Janczuk has rattled off seven consecutive wins, bringing his season total to eight.

Edwards has six wins at the ‘Track of Champions’ to go along with four runner-up finishes. Fonda Speedway registered drivers however only have one more race to go before the Sept. 4 deadline for the American Racer Cup.

Brandon Edgar – a driver at Pa.’s Big Diamond Speedway – rounds out the top five at 650-points.

A $6,750 point fund is given out to the Sportsman at the end of the American Racer Cup season. With free product giveaways and Insinger Performance regional cash included, more than $10,000 is handed out to Sportsman racers.