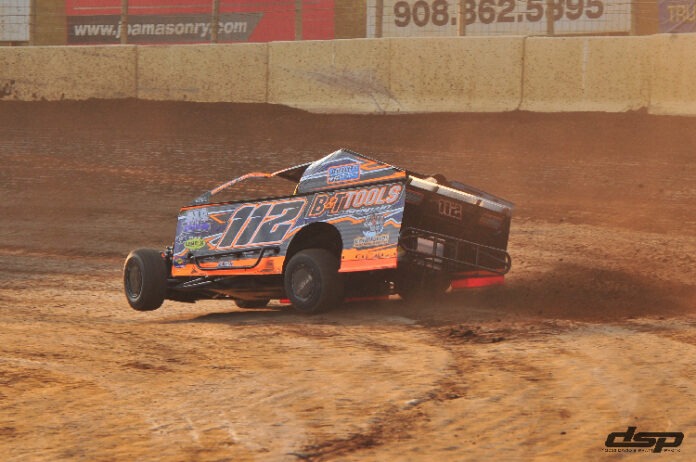 Ross has been working hard to improve his performance with his B&T Tools No. 112 since making the switch in Saturday night venues earlier this season. “We’ve been trying to get better and actually made things worse,” Ross said after the win, “but we found something.”

The thirty lap Modified feature saw three different leaders in the first three laps of the feature. Ron Roberts grabbed the lead on the start and led lap one. Davey Sammons had the advantage on lap two as he raced to the line with Ross. Ross was out front on lap three and led the remaining laps to the checkered.

Sammy Martz, Jr. had his best night as a Modified Rookie as he chased Ross to the checkered. Martz was closing in on the leader as the laps counted down and the leaders raced through lapped traffic. Sammons finished third followed by Richie Pratt, Jr. and Ryan Godown. Godown and Billy Pauch, Jr. battled for fifth for many laps with Godown finally securing the spot in the final laps. Pauch finished sixth which puts him just eight points behind Godown as they head into Championship Night next Saturday. Neal Williams finished seventh followed by Dominick Buffalino, HJ Bunting and Tommy Beamer.

Steven Yankowski led the first two laps of the 602 Sportsman feature before Godown, Jr. took the lead on lap three. Yankowski had his best finish of the season as he raced to a runner-up finish ahead of Ethan Bill and Travis Hill. Brian Papiez finished fifth. Howie Finch finished sixth followed by Bryan Brobst, Trent Willy, Matt Ellery and Brandon Watkins.

Henry led the rest of the way to the checkered over Hughes, Tom Wills, Jr., Lee Allen and Jeff Dirkes.

Rich Janney got some redemption after an early season crash as he won the first of two fifteen lap feature events for the MASS sprint cars. Janney led all the way to the checkered with pressure from Dave Brown as they headed to the finish. Jon Brennfleck finished third over Kevin Nagy and DJ Tanner.

The dice were rolled to determine the invert for the second fifteen lap feature, putting sixth place finisher, Aidan Borden on the pole for the second race.

Borden led through lap seven and then pulled off during the caution on lap eight. Borden’s No. 7 suffered a flat tire after contact was made following a previous restart. Nagy inherited the lead on the restart and the defending MASS Champion raced to the win over Brown, Tim Iulg, point leader, Buddy Schweibinz and DJ Tanner.

Bridgeport Motorsports Park prepares to crown their 2022 Champions on Saturday night. It’s a night you won’t want to miss!