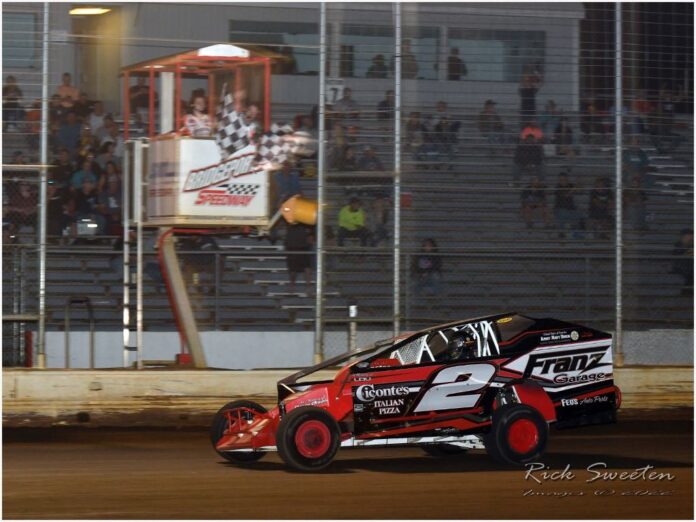 SWEDESBORO, NJ – ​To say that Mike Franz’s Saturday night victory in the Danny’s Pizza Pizzazz Modified feature at the Bridgeport Motorsports Park was a popular win – that would be an understatement. The congratulatory messages – in person, on the phone or on social media – continued throughout the next day. Everyone was happy for Bridgeport’s first son – other drivers, other teams and many, many fans.

Mike Franz is a second generation competitor, following in his father’s foot steps. The Franz family has supported the Bridgeport Speedway from the beginning – fifty years ago. On Saturday night, Mike Franz won his first ever Modified stock car race and was awarded the Bridgeport 50th Anniversary Medal & Cap presented to all feature winners this season.

“I’ve won a lot of heats and consis – I’ve been close to winning many times,” Franz exclaimed. Something always happened. “With two to go, I thought I’d screwed up.” But he hadn’t. Franz drove to the checkered flag with a sizeable lead over Davey Sammons for the win. Over the winter, Franz built a new Bicknell with power under the hood built by Master Machine. During opening day warm-ups, Franz felt that he had a chance with this new car.

Franz grabbed the lead on the start and then spent a handful of laps racing against Tommy Beamer and Davey Sammons in a three car battle for the lead. As Beamer and Sammons continued the battle for second, Franz was able to pull away. Sammons took over second just before the crossed flags.

After a three-wide battle, Watt raced into third on lap seventeen. With ten to go, Dominick Buffalino and Ryan Godown joined the top five, racing behind Franz, Sammons and Watt.

Franz led the field by a half of a straight-away as the laps counted down. Buffalino challenged Watt for third and eventually won the position. Franz took the checkered followed by Sammons, Buffalino, Watt and Godown, the 2022 Track Champion.

Godown held an eight point lead over Billy Pauch, Jr. going into the final night of points. The two raced through the field together. Pauch had just passed Godown for fifth when mechanical failure slowed the Holsten No. 96 and Pauch pulled off of the track.

Godown could certainly relate to the feature winner’s sentiment when he thanked his dad for getting him started in racing. Two weeks earlier would have been Mike’s dad, Frank’s birthday. That was the weekend that Godown won and dedicated the win to his dad. “I would have liked to have won that weekend,” Franz related. Both drivers honored their fathers with their performances.

Ryan Godown, Jr. was some eighty points ahead of Howie Finch in the bid for the 2022 Track Championship for the Precision Hydraulic & Oil 602 Sportsman. He had clinched the title before the wave of the green flag but that didn’t stop the second generation driver from giving it his all in the twenty-five lap main event.

2022 Rookie Champion, Thomas Prychka took the lead at the wave of the green and led through the first five laps. Travis Hill raced into the lead on a lap six restart. Steve Kemery raced Hill for the lead on a lap ten restart but Hill prevailed. Another caution with eighteen laps scored set up another restart and this time, Kemery came away with the lead.

Kemery scored the win – his third of the season – with Hill finishing second. Ethan Bill finished a strong third with Godown, Jr. finishing fourth after starting twelfth in the starting line-up. Wayne Weaver had a strong run to finish fifth.

Jeramy Doerr led every one of the fifteen laps to win the EZ Finance Trucks Street Stock feature. While Doerr led all the way, he was pressured throughout the race by Mike Hughes. Several times, Hughes got a nose underneath the leader but each time Doerr was able to hold on to the lead.

The title was the first for Allen at Bridgeport. He achieved his goal with the help of his brother, Chris and everyone who supported and helped his efforts.