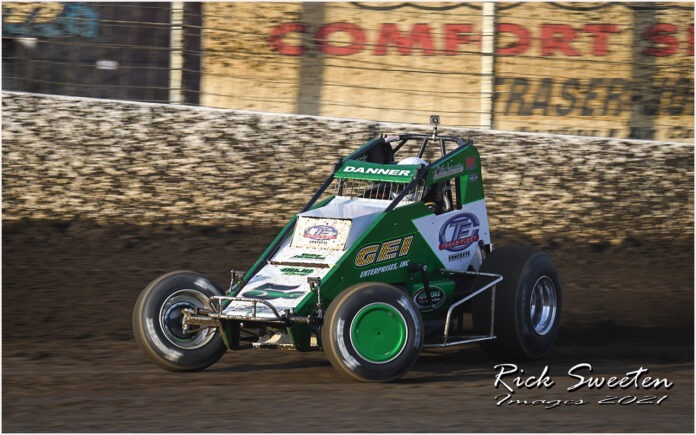 SWANESBORO, NJ-Cory Eliason dove to the inside of Justin Peck on lap nine to take the lead in the twenty-five lap Capitol Renegade 410 feature event on Day two of the Sprintober Fest weekend sponsored by Specialty Rigging at the Bridgeport Motorsports Park.

Eric Jennings made it two for two with his second win of the weekend in the North East Wingless Sprints.  Briggs Danner picked up wins in both his USAC East Coast Wingless fifteen lap qualifier and his fifteen lap qualifier with the United Racing Club.  (URC)  Austin Graby picked up the win in the second USAC EC qualifier after competing in just a handful of races during his rookie season.  Jordan Thomas raced to the win in the second qualifier for the URC competitors.

Justin Peck raced to the win in the 410 Dash, earning the pole position start in the twenty-five lap main event.  Peck raced out in front at the wave of the green but Eliason quickly moved in to challenge for the lead.  Peck held off the challenge and raced to a lead of several car lengths.  Eliason challenged Peck again on a lap eight restart.  Peck was able to regain the lead but Eliason was out in as the leaders headed to the start finish line to complete lap nine.  Peck had a tire going down from this point of the race and managed to maintain his runner-up finish all the way to the checkered flag.

Anthony Macri, Gio Scelzi and Kyle Reinhardt battled for the third position through the second half of the race with Scelzi securing third over Macri and Reinhardt.

The checkered flag waved for Eliason who was making his first ever start on the High Banks.  Peck finished second, maneuvering the Buch No. 13 with a tire that was going flat during the final fifteen laps.  The tire was on the rim by the time Peck made it back to his pit area.

Scelzi. who set a new one lap record for the 410s on Friday night, finished third followed by Macri and Reinhardt.  Tyler Ross, Danny Dietrich, Lance Dewease, Lucas Wolfe and Paulie Colagiovanni completed the top ten in the running order at the end of twenty-five laps.

Eliason, who traveled from his home state of California to compete in the first Sprintober Fest, was pleased to add a victory to a season that did not meet his expectations.  “I didn’t make it here with the All Stars,” Eliason related.  “This is a bad ass place!”  HIs focused now was on the $15,000 prize money for the win Sunday.

Aiden Borden led the first lap of the USAC EC first qualifier but it was Briggs Danner who raced into the lead on the second lap.  Danner drove away from the competition, leaving Borden to battle for second with Kyle Spence.

A lap nine caution restacked the field for the restart, erasing Danner’s lead.  Bright was able to take over second in the final laps but was unable to catch Danner as they raced to the checkered.  Danner took the win over Bright, Borden, Spence and Jonathan Swanson.  Colin White and Preston Lattomus followed in the final two transfer spots.

Austin Graby grabbed the lead in the second qualifier for the wingless 360 sprints and led all the way to the checkered.  Bobby Butler quickly moved into second where he spent the remaining laps, chasing the leader.  Kenny Miller III raced inside and outside to finish third followed by Joey Amantea and Chris Allen.  Eric Jennings and three time USAC EC Champion, Steven Drevicki raced into the final two transfer spots.

Anthony Macri led lap one of the first URC qualifier but Danner raced from his fourth place start to take the lead on lap two.  Macri was able to close in on the leader as they raced through lapped traffic but even a big slide job in the final corners of the race was not enough to overtake Danner.  Devon Borden finished third over Tyler Ross and Jason Schultz.

Josh Weller led the way in a second URC qualifier, leading the first nine laps of the race.  Jordan Thomas raced into the lead on lap two and never looked back as he raced to the fifteen lap win.  Weller crossed the line in second over Troy Betts, Dallas Schott and Mike Melaire,

Eric Jennings was able to return to Victory Lane for the second time during the weekend as he drove to the win in the twenty lap NEWS feature.  Nick Dagostino took the lead at the wave of the green.

D’Agostino led the way for the first nine laps.  A lap ten restart saw D’Agostino take the outside for the restart but Jennings quickly went to the outside of Dagostino as they exited turn two.  Jennings had the lead as the field received the crossed flags.

Rich Mellor raced into third on a lap thirteen restart, trailing Jennings and Thompson.  Brendan Hires raced into fourth in the final laps.

Jennings drove to the checkered for his second win of the weekend followed by Thompson, Mellor, Hires and D’Agostino.