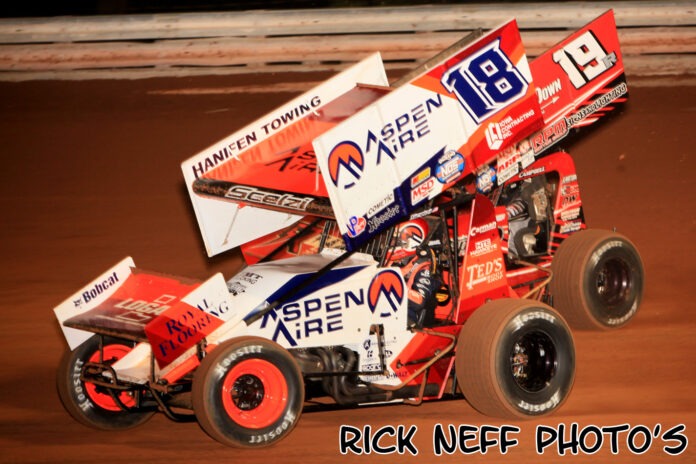 The final day of Sprintoberfest competition sponsored by Eastern Rigging left nothing to the imagination and delivered everything a racer could ask for!

Gio Scelzi raced to the win in the forty lap main event for the 410 Sprints after setting a new one lap record on Friday that was then broken by Anthony Macri on Sunday.  “This is such an awesome race track,” Scelzi related.  “I like to come here.”  Scelzi had competed on the High Banks on several other occasions.

The Rapid Tire USAC East Coast Wingless Sprints had the crowd on the edge of their seats as rookie, Bobby Butler led thirty-nine of the forty laps before getting up on the cushion and flipping wildly while racing with two of the best – Briggs Danner and Alex Bright.  Danner led just the final lap to pick up his twelfth win in his Championship season.

Devon Borden left the High Banks on Sunday after racing to his first Bridgeport win in the United Racing Club (URC) forty lap main event.  His Shuttleworth Stehman racing team gave the young Raymond, WA driver excellent equipment all weekend as they also picked up a top five finish in the 410 feature event.

The West Coast drivers certainly drew attention in the 410 events.  After picking up the twenty-five lap win on Saturday night, Cory Eliason went right to the front in Sunday’s feature,   Eliason started to the outside of polesitter, Devon Borden, and raced into the lead at the wave of the green.  Justin Peck raced into second on lap four and chased Eliason all the way through lap twenty-three.  The caution waved at that point when the leader slowed with mechanical issues.  This caution was then designated as the mandatory break when the teams were allowed to add fuel and make adjustments to the cars.

Unfortunately, it became evident that Eliason would relinquish his lead as his race came to an end after a mechanical failure.  As the caution waved, smoke could be seen from Peck’s Buch Motorsports No. 13.  His race also came to an end at the break.  Third place Gio Scelzi inherited the lead when the field went back to green flag racing.

Scelzi referred to these events as a “Christmas gift” but he was able to capitalize by racing to the win and the $15,000 prize.  Borden raced in second behind the leader until Danny Dietrich moved up to second with a great move on a lap twenty-five restart.  One lap later, Kyle Reinhardt raced by Dietrich to take over second.

It was Lance Dewease who was on the move in the final laps as he raced from fifth to third just before the checkered.

Scelzi took the win over Reinhardt who did all he could to pick up the win in his home state.  Dewease grabbed third on the final lap from Borden who finished fourth ahead of Dietrich.  Ryan Smith finished sixth followed by Davie Franek, Troy Wagaman, Lucas Wolfe and Dominic Melair.  Lucas Wolfe was the hard charger of the race.

Indy Race Parts heat races were won by Borden, Eliason and Scelzi.  Borden picked up the win in the five lap Dash over Macri and Eliason.

Macri set fast time during timed hot laps, setting a new one lap record for the 410 sprints at 12.459 seconds.

In just his third race with the USAC East Coast Wingless Sprints, Bobby Butler showed himself as a serious contender.  After tranferring through his qualifier on Saturday, Butler started from the pole in the forty lap main event on Sunday.  Butler quickly moved out in front of the field at the wave of the green.  Aiden Borden, Joey Amantea, Kyle Spence and Alex Bright raced in the top five behind Butler with five laps scored.  ‘

Amantea and Bright moved up to second and third by lap ten as Briggs Danner broke into the top five.  Butler continued to drive away from the field with his 358 power plant – not 360 like the other competitors.

Bright moved into second and then closed the gap on the leader as they raced through heavy lapped traffic.  With twenty-two laps scored, the caution waved for Preston Lattomus, giving the leaders a clear track ahead but also erasing Butler’s advantage, moving Alex Bright and the Rodota Trucking No. 20 right on his back bumper.

Bright challenged for the lead with multiple slide jobs but Butler was able to answer with crossover moves each time.  While Butler and Bright battled, Amantea and Danner were racing hard for third.

With ten laps to go, Butler had both Bright and Danner in his wake.  After Bright challenged for the lead with slide jobs, Danner countered and took over second on lap thirty-four.

Five to go and Butler was still holding his challengers at bay.  “I knew I had to run hard,” Butler explained.  On lap thirty-nine, Butler got into the cushion but had a enough room to correct and hold the lead as he and Danner raced down the backstretch.  The leaders took the white flag and raced into turn one.  This time, when Butler raced hard into the corner, he caught the track the wrong way, causing the car to turn toward the wall and get up in the air.  Butler literally flipped on top of the Heffner No. 5G .  “I couldn’t believe we didn’t have more damage,” Danner stated.  “Just the front bumper.”

The red flag was thrown.  Butler climbed from the car on his own but later elected to be checked out at the hospital.  The field realigned for the one lap shootout with a scene that has been repeated many times this season – Danner in the lead with Bright on his back bumper.

Danner raced to his twelfth win of the season followed by Bright, Amantea, Spence and Kenny Miller who rebounded from a flat tire during the red flag.  Colin White finished sixth with Steve Drevicki, Christian Bruno, Jonathan Swanson and Ed Aiken completing the top ten.

Devon Borden chalked up several firsts with his forty lap win in the URC main event on Sunday.  It was his first win at Bridgeport as well as the state of New Jersey, his first 360 win on the East Coast and his first win with URC.

Borden took the green from inside the second row and Jordan Thomas and Anthony Macri leading the field to the green flag.  Macri dove to the inside of turn three to grab the lead on the first lap.

After visiting Victory Lane a few mintues earlier, Briggs Danner raced the winged Heffner No. 5G into second on lap two but Borden fought back to regain the runner-up position.  Thomas and Dallas Shott rounded out the top five with five laps on the books.

Shott moved up to fourth as Tyler Ross broke into the top five before ten laps were scored.

The number thirteen wasn’t unlucky for Borden as he drove into the lead, passing Macri on lap thirteen.

On lap twenty, Borden raced into turn one and quickly came up on the car of BRandon McGough.  McGough stood the No. 669 on it’s tail, right in front of the race leader.  Borden made it through the incident unscathed as the red flag was thrown.  McGough was not injured.

The field regrouped after the fuel stop to complete the forty lap distance.

Borden went right back to work, maintaining the lead and pulling away from the field.  Shott moved up to third with Danner and Robbie Stillwaggon completing the top five as Borden again caught the back of the field.

Borden was flawless on the final caution with just ten laps to go.  Borden drove to the checkered flag, earning his first trip to Weaknecht Archery Victory Lane with his crew to celebrate their win.  “This is really awesome,” Borden exclaimed.  “The racing is really good here and it’s good for the fans too!”

Sprintoberfest was a weekend that won’t be forgotten any time soon.