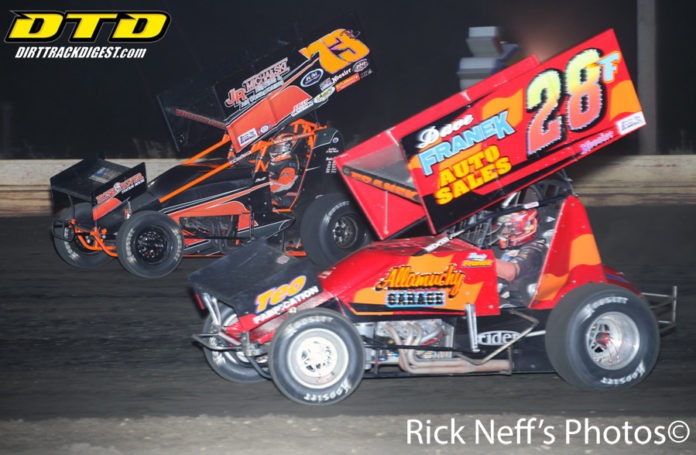 URC welcomes title sponsor, Capitol Renegade for the 2017 season. Capitol Renegade – “The Headquarters” for all you Race Transport Needs – is a good match for the traveling sprint car club who is celebrating their 70th Anniversary season as America’s oldest traveling sprint car series. This will be the third consecutive year that URC has opened their season at the Bridgeport Speedway.

2016 URC Champion, Davie Franek picked up his first of seven wins in the Bridgeport opener on his way to his second career URC Championship.

Josh Weller is looking forward to returning to Bridgeport where he picked up one his four wins last season during Bridgeport’s Three for All event during mid-season. Weller returned to the cockpit of his family owned equipment in 2016 and had a momentous season. Weller is hoping to carry that momentum into the new season.

With nine URC titles to his credit, Curt Michael is looking forward to the season opener. Michael picked up a Brideport win last year during URC’s Big Track Classic weekend, winning the Friday night event while Lucas Wolfe earned his win on the next night. Bridgeport is special to Michael who won the 2015 season opener to celebrate his 50th win in URC competition.


There will be one URC competitor who will be very familiar to Bridgeport Speedway fans as Kris Lilick has made the switch from Crate/Sportsman competition to sprint cars for the 2017 season. Lilick tried his hand in a second Haggenbottom No. 24 during the Big Track Classic weekend and will race full time with URC this season.

Stewart Friesen was the feature winner of the only Big Block Modified race so far this season after capturing the win in the 60 Over Special/Doug Hoffman Memorial, taking the lead from Jeff Strunk in the final laps of the forty-four lap event. Strunk will be in the field Sunday, looking for his first ever Bridgeport Big Block Modified feature win but he has his work cut out for him.

Two time Bridgeport Big Block Champion, Ryan Watt had his Roberts Racing No. 14w in mid-season form during the opener but his efforts were derailed twice by flat tires. Watt had raced up to third before making his first visit to the pits. After restarting at the rear of the field, Watt had just raced back into the top five when fate struck once again.

Other Bridgeport regulars will be on hand to defend their home turf against the invaders. Sam Martz was one of the three drivers to lead laps in the season opener. Rick Laubach was sidelined with mechanical ills with the Gary & Lori Hermann No. 7 during the opener, after picking up the win in the Small Block Modifed event the night before. Dominick Buffalino made his presence known during the opening weekend and will certainly be looking for his first checkered flag of the season in addition to Neal Williams, Richie Pratt, Jr., Wade Hendrickson, Tommy Beamer, David Hunt, Jamie Mills, Ron Roberts, Jesse Hill and a host of others.

Brian Papiez picked up the Crate/Sportsman win during the 60 Over weekend and will be looking forward to continuing his winning ways. Chris Jenkins had his best ever finish during the 60 Over Weekend. After leading the first half of last week’s race, Jenkins will be looking for that first checkered flag in the races to come. Roger Manning and Kevin Belmont debuted new equipment during the first weekend of the season and will be competing for their share of the purse as will Stephen Kemery, Brad Roberts, Matt Stangle, Billy Briggs, Scott Hulmes and others.

DA’s Auto Body & Repair Rookies division is one of the biggest to date. There were three lead changes during their first eight lap feature event, promising a very exciting Rookie season in 2017. Kevin Britt, brother of Modified driver, Jim Britt, picked up the win after Eric Mattson and Tom Errico Jr. both led several laps.