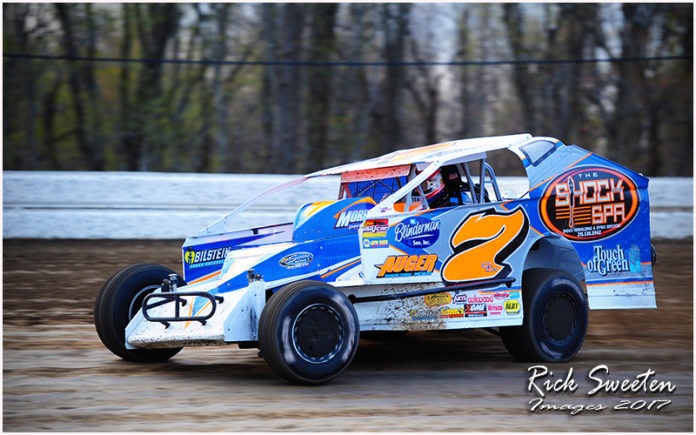 SWEDESBORO, NJ – After three weeks of racing in the 2017 season, the Bridgeport Speedway is still looking for its first repeat winner!

2012 Bridgeport Champion, Laubach held off the challenges of a very persistent two time Bridgeport Champion in Ryan Watt to win the Big Block portion of Saturdaynight’s racing program. Laubach drew the pole but had Watt to his outside for the start of the race. Watt fought a tight race car at the start but battled back to second after losing several positions on the original start. Several times, Watt got a nose under the leader but Laubach was able to pull away from his challenger as they raced down the backstretch.

“That’s the way these early (season) races go,” Laubach stated, making reference to the luck of the draw starting line-ups. “I’ve been real lucky so far this season by drawing good starting positions.” Laubach wanted to dedicate his win to Janet Ladner, a long time Bridgeport employee who passed away on Friday. “I’ve been thinking about her all day today,” Laubach said of the woman who signed in the competitors each week at Bridgeport’s pit gate. “This one is for her!”

Watt chased Laubach to the finish to take second with Neal Williams ending a very strong outing in Sal DeBruno’s Overhead Door No. 0 to finish third. 2015 Bridgeport Champion, Jamie Mills finished fourth with Brett Kressley taking a fifth place finish after starting in twelfth and then racing his way back from a mid-race incident.


Brian Papiez led the first eleven laps of the Crate/Sportsman feature before being tracked down in lapped traffic by Stangle. Stangle completed the pass for the lead on lap twelve and drove away from the field to capture his first win of the season – one week after setting a new one lap record for the Stewart Stainless Crate/Sportsman. Papiez rebounded from a wreck one week earlier to finish second. Dave Damiano finished third in his first outing of the new season. Last week’s feature winner, Travis Hill finished fourth with Eric Kormann rounding out the top five in his first race of the season.

Tom Wills, Jr. outgunned a hard charging Jeramy Doerr to take his first PennCo Tech Outlaw Stock feature of 2017. Doerr, who was a late arrival, literally arrived at the track just in time for the feature. He started at the pack of the pack but was there in the final laps to give Wills a run for the money. Wills beat Doerr to the finish line with Brian Ludwig, who challenged Wills during the early laps of the race, finished third. Jeff Dirkes and Ken Moren finished fourth and fifth, respectively.

Dave Izzi led the first five laps of the DA’s Auto Body & Repair Rookie Feature before Tom Errico, Jr. raced his way into contention from his sixth place starting spot. Errico took over the lead on lap six and went on to take the win in his red, white and blue X-Rated. Izzi held on to finish second with Kevin Britt, the winner of the season opener, finishing in third. Brett Belmont raced from a ninth place start to finish fourth with Jim Gallagher, Jr. rounding out the top five.

Bridgeport will host the third running of the South Jersey Shootout on Sunday, April 23rd. Racing gets underway at 5pm for the second race of the season for the South Region of the Bob Hilbert Sportswear Short Track Super Series fueled by Velocita. The Big Block Modifieds, Crate/Sportsman and Outlaw Stocks will take to the track with the Big Blocks racing for $5,000 to win in their forty lap main event.