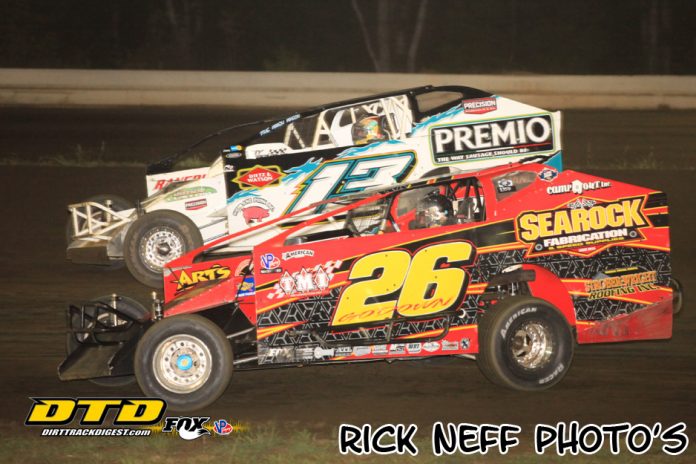 SWEDESBORO, NJ – For the fourth season in a row, the Bridgeport Speedway offered their Three For All event – three headline divisions in one racing program for one admission as the Super Late Models, 358 Small Block Modifieds and USAC East Coast Wingless Sprint Cars provided an exciting night of racing.

For the first time, the Three for All action was moved to the Design for Vision/Sunglass Central 3/8th mile track at Bridgeport as the drivers from all three divisions offered rave reviews of the racing on the Bridgeport Speedway’s third track.

Delaware’s, Amanda Whaley had the fans on their feet as she raced to the outside and into the lead as the Super Late Models headed to the half way mark in their feature event.

Austin Hubbard raced up the inside of the track to take the lead from Ross Robinson on lap three. Whaley started in mid-pack and raced into the top five by lap five. By lap ten, she had disposed of Mark Pettyjohn and Robinson and had her sights set on Hubbard. Using the outside line, Whaley raced by Hubbard as they exited turn two on lap thirteen.

Hubbard kept the leader in his sights for the remaining laps and made a last lap attempt for the win, pulling along side of Whaley as they crossed the finish line. Whaley held the advantage and took the win over Hubbard, Robinson, Pettyjohn and Brian Bernheisel.


“I love the track,” Whaley said of her first 3/8th mile experience. “It’s racier. It has a good top and bottom.” Whaley not only became the first Super Late Model winner on the 3/8th mile track but also the first woman feature winner.

The Design for Vision/Sunglass Central 3/8th mile has been a favorite for driver, Ryan Godown since its first race. A quick move up the inside from his third place start had Godown out in front with the Searock No. 26 on the first lap while Mike Gular, Jeff Strunk and Wade Hendrickson picked their way through the top five.

Gular took over second from Rocco Infante on lap six as did Strunk a few laps later. By that time, Godown was long gone, dodging lapped cars as he made his way around the 3/8th mile track. The lapped traffic offered little issue for Godown. “Our car was just that good,” Godown explained.

With five to go, Strunk made his move to the inside to take over second from Gular. The man on the move in the final laps was Billy Pauch who ran just outside the top five with five laps to go. Pauch first overtook Infante and then Hendrickson to run fourth. A last lap charge saw Pauch beat Gular to the stripe for a third place finish.

Godown took the checkered in the caution free race in 7:19.28 minutes followed by Strunk who now has two wins and a second on the 3/8th mile surface. Pauch finished third followed by Gular and Hendrickson.

The USAC East Coast Wingless Sprint Cars made their first appearance at the Bridgeport Speedway and put on a tremendous show of side by side racing and slide jobs throughout their twenty-five lap feature event.

Joey Biasi was the race’s early leader as he battled with Bill Unglert until Coleman Gulick came to challenge on lap four. Gulick had the lead on the next circuit and then battled Biasi and later, point leader, Steven Drevicki for the win.

The wingless sprint car drivers left nothing on the track as they battled for positions right to the finish.

Gulick took the win over Drevicki. Ryan Godown, doing double duty, took over third on lap eighteen to finish ahead of Biasi while Eddie Strada rounded out the top five. Both Godown and Strada came from the back of the pack after qualifying in the B Main.

Gulick said he just “pushed the car as hard as it would go” to capture the win.

Three new winners from three different states – Whaley from Delaware, Godown from New Jersey and Gulick from New York. It was a great night of racing!