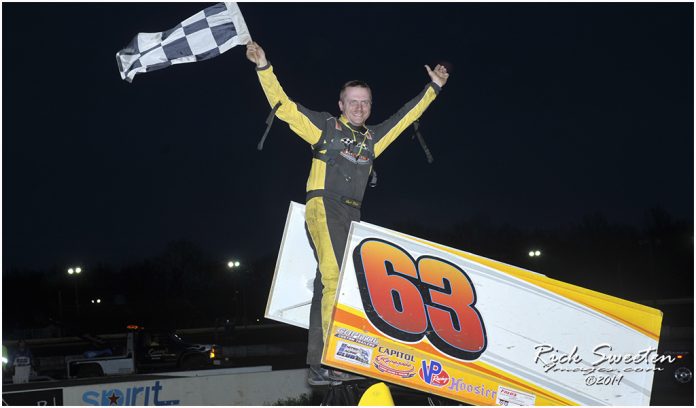 BRIDGEPORT, NJ – Rick Laubach claimed his 51st Big Block Modified victory in the BRB Contractors sponsored tripleheader at the Bridgeport Speedway while Steve Kemery picked up his second win of the season in the South Jersey Overhead Door 602 Crate/Sportman main event. Josh Weller did everything that he could to defend his title in the Capitol Renegade United Racing Club season opener, picking up the win – his first of the season.

It was a welcome relief for Laubach, to be standing in Victory Lane, after a winless 2018 season. “Everything just worked out right for us today,” Laubach related. “We definitely had an angel looking out for us,” Laubach stated, referring to Lori Herman, along with husband, Gary owned the No. 7 that Laubach pilots at Bridgeport. Lori lost her hard fought battle to cancer last year.

Laubach drew the pole for the start of the twenty-five lap main event for the Spirit Auto Center Big Block Modiifeds but he had Bridgeport’s All Time Feature Winner, Jimmy Horton, starting alongside. Laubach quickly moved in front at the wave of the green . Horton held down second for the first ten laps until Brandon Grosso made the pass for the runner-up spot on a lap eleven restart.

Grosso was able to close in on Laubach to offer a challenge but was never able to capitalize on the opportunity.


The win paid Laubach $3,000 including the bonus offered by BRB Contractors for this event.

For the fourth time in the last five races, Steve Kemery raced to the win in the South Jersey Overhead Door 602 Crate/Sportsman, picking up the extra bonus paid by Precision Hydraulic.

For eighteen laps, it appeared as Joe Toth was on his way to his first Bridgeport victory. Toth led until a red flag was needed at the end of eighteen laps when Kevin Belmont and Ernie Miles III tangled in turn two with Miles getting upside down. Both drivers escaped injury.

When the filed lined up for a single file restart with two laps to go, Toth lost fuel pressure. Kemery was able to take the lead while Toth’s No. 9 flatered before slowing on the backstretch and then coming to a complete stop, bringing out another caution.

Josh Weller put together twenty-five perfect laps in the first step in defending his title with the United Racing Club.

Steve Buckwalter, driving the Bob Lilick owned No. 7, was the only driver to offer a challenge to Weller but Buckwalter was forced to pit for a flat tire during the race’s final laps.

Chad Layton took over second but was never able to get close enough to Weller to mount a challenge.

Weller led Layton, Jason Shultz, Curt Michale and Lucas Wolfe to the finish line. Shultz ran in the top five during the entire event while Michael made a late race charge to take over fourth. Troy Betts finished sixth ahead of Austin Bishop and Tyler Ross. Steve Buckwalter rallied to ninth place finish after his tire change with Davie Franek finishing tenth.

The Bridgeport Speedway will remain idle until Saturday, May 4th for the first regular Saturday night event of the season and the start of the 2019 point season.