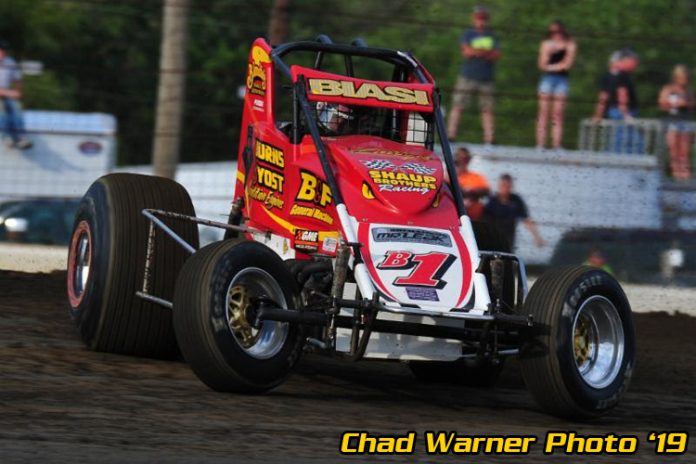 SWEDESBORO, NJ – Biasi of Mary D, Pennsylvania wrapped up a dominant weekend by cruising to a convincing win in the Rapid Tire USAC East Coast Sprint Cars feature event at the Design for Vision, Sunglass Central 3/8ths mile oval at the Bridgeport Speedway.

Biasi started out the weekend by collecting a second place on Friday at the Trail-ways Speedway, and a win at the Path Valley speedway in wingless Super Sportsman Sprint car competition and wrapped up the weekend with another checkered at Bridgeport.

Biasi was able to jump out to the lead from the pole position following the heat race redraw. Biasi was challenged as best as he could by Chandler Leiby in the feature event. A caution for a spinning Craig Pellegrini on lap 2 would bring the field together for a restart. Following the restart, the top two settled in as the feature laps started to wind down and caught the back of the field. As the leaders entered lapped traffic, Leiby would try his best to try and work to the low side of Biasi, especially in turns three and four.

The top two would battle for position through the lapped traffic, with Leiby waiting for Biasi to make a mistake. Timmy Buckwalter who started in the 9th position for the feature event would methodically work his way up through the field to the top five near the halfway point. Buckwalter would utilize the lapped traffic the front of the field was encountering to slide passed Eddie Strada for the third-place position. Unfortunately for Buckwalter and Leiby it would be as far as they could go as Joey Biasi would take the checkers.


The speed for Biasi at Bridgeport is no surprise as Biasi was involved in a heavy battle with Coleman Gulick for last year’s inaugural feature event win at the new 3/8ths mile oval but ended up in the second spot. Biasi has been fast all season with the USAC Series since returning from injury. Biasi was injured in a frightening hot lap session crash at the Lincoln Speedway and was left with a broken arm. Biasi was forced to miss the show at Delaware International, but since his return Biasi has collected a top 10, top 4, and now has returned to victory lane.

The string of consistent finishes continues for Steven Drevicki and Chandler Leiby who both would finish in the top five. Drevicki and Leiby are positions one and two in the points standings. Both drivers have also finished in the top five in every feature event so far this season. Drevicki leads the way with two wins, while Leiby is still searching for his first series win, but he is ever so close.

Up next for the Rapid Tire, USAC East Coast Sprint Car Series is a return trip to the Big Diamond Speedway on June 7th for their second show of the year at the Speedway.