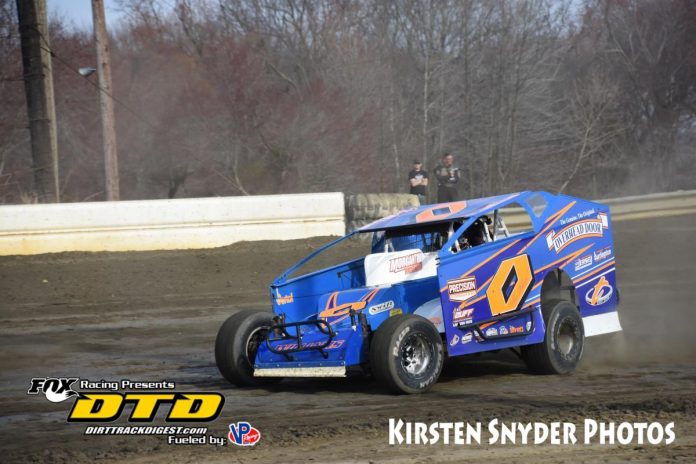 BRIDGEPORT, NJ – After a rough start to the 2019 racing season, Neal Williams drove the South Jersey Overhead Door No. 0 to victory in Saturday night’s Spirit Auto Center Big Block Modified feature. Jim Gallagher picked up his second win of the season in the South Jersey Overhead Door 602 Crate Sportsman feature while it was win number four for Rich Stinson, Jr. in the Sunbelt Rentals Outlaw Stocks.

“It’s been a long time coming,” Williams exclaimed, “I can’t wait to get another one.” The win was Williams’ second Big Block win at Bridgeport.

Five time feature winner, Billy Pauch had a tire go down before the start of the feature. That sent him to the rear of the field for the green flag but it is just possible that his bad luck was really his good luck because he was able to avoid the first lap, first turn incident that saw reigning track champion, Ryan Watt, take a wicked ride in turn one. Watt barrel rolled several times before coming to a stop. He and Pauch were slated to start the feature side by side. Watt was not injured in the wreck that involved seven cars.

The field realigned for a complete restart with Bob Sarkisian and Mike Franz dueling for the lead. Franz won the spot and led the first two laps. Tommy Beamer raced in second and inherited the lead for a lap three restart when Franz headed to the pits with mechanical issues.

Beamer led through lap five as both Williams and Richie Pratt, Jr. were on the move. Williams made the move to take the lead on lap seven with Pratt hot on his trail.


Pauch was making his way through the field after a second trip to the pits for a flat tire.

Williams led Pratt, Beamer, Matt Stangle and Pauch at half way. Two laps later, the leaders had caught the back of the field.

Pratt was able to close in on the leader and he raced side by side with Williams with just five laps to go but it was Williams who raced to the win. Pratt finished second followed by Pauch, Stangle and Wade Hendrickson who rebounded from the lap one incident to grab a top five finish. Jimmy Horton finished sixth followed by Dominick Buffalino, Beamer, David Hunt and Brett Ballard.

Tom Sherby dominated the South Jersey Overhead Door 602 Sportsman feature but was forced to pit for a tire change with just two laps to go. Jim Gallagher’s pass by Wayne Weaver for second just a few laps earlier paid dividends as he inherited the lead.

Gallagher went on to collect his second win of the season over Matt Peck who raced into second in the final laps. Weaver finished third followed by Eric Kormann and Travis Hill. Bobby Bracall, Howard Huepful, Sherby, Jonathan Swift and Ernie Miles Jr. rounded out the top ten.

Rich Stinson, Jr. raced into the lead on the second lap of the Sunbelt Rentals Outlaw Stock feature event and never looked back.

Nick Sandone led the first lap before Stinson made it three wide to race into the lead. Tom Wills, Jr. raced into second on lap seven but wasn’t able to challenge Stinson for the lead. Wills finished second with Lee Allen winning the heated battle for third over Brian Ludwig. Jeff Dirkes edged out Gary Klimeczak to finish fifth at the checkered.

Racing returns to the 5/8th mile this Wednesday for the Rumble on the River, the third hand in the 2019 Poker Series. The tripleheader show of Big Block Modifieds, 602 Crate Sportsman and Outlaw Stocks will get underway at 7:30pm.