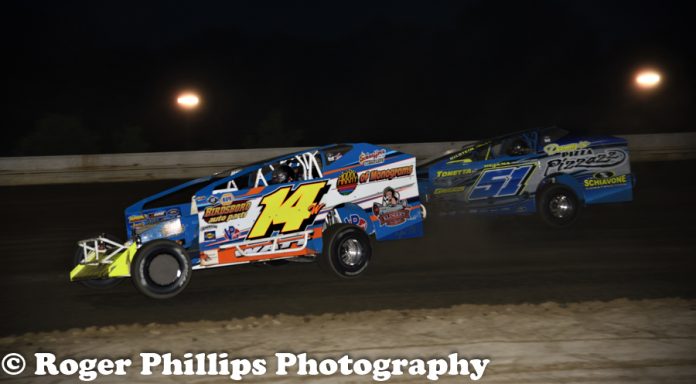 Pete Visconti led the way through lap ten when Dominick Buffalino made the pass for the lead. Buffalino had the Horton No. 76 out in front and looked like he was on his way to his second win of the 2019 season. With five laps to go, Buffalino had pulled ahead of Ryan Watt in lapped traffic as they raced ahead of Matt Stangle, Pete Visconti and Wade Hendrickson. Brett Ballard slowed on the track with mechanical issues with just four laps to go, bringing out the caution and setting up a single file restart.

Buffalino took off at the wave of the green and kept a car length or two between himself and defending track champion, Watt. Buffalino took the white flag and started to make his final trip around the 5/8th. Watt challenged as the leaders hit the final two corners. It was a drag race to the checkered with Buffalino on the inside and Watt on the outside drove to the finish. They were side by side as they headed to Ken Golden’s checkered flag with Watt about a half of a car length in the lead. “When you have a track like this,” Watt explained, “you have great racing. There was a top, a bottom and a middle – you could race anywhere!”

Watt picked up the win over Buffalino, Stangle, Hendrickson and Pauch who broke into the top five in the closing laps. Visconti finished sixth followed by Jim Britt, Richie Pratt, Jr., Neal Williams and David Hunt.

Going into the final night of point racing, Eric Kormann led Matt Peck by just two points and Wayne Weaver by eleven points. It would all come down to the finish at the end of twenty laps.

Tom Sherby left little doubt about who the feature winner would be as he put the No. 257 out in front on lap one and just never looked back. Two early cautions brought about a second complete restart but Sherby was ready as he pulled ahead of Jim Gallagher, Jr. and Matt Peck. Peck took over second on a lap two restart with Kormann up to third with five laps scored.

A two car incident on the backstretch on lap ten had the field realigned for a double file restart. Sherby held the lead with Peck in second as Steve Kemery was on the move, taking third over Gallagher and Wayne Weaver. Kormann lost several positions on the restart.

The 2019 season was a year to remember for Peck who came up through the DA’s Auto Body and Repair Rookies. Peck won his first heat race, his first feature and now his first championship all during the 2019 season.
of the feature event. Lap ten saw the leader under a lot of pressure as six time feature winner, Rich Stinson challenged as the field headed on the backstretch. Contact was made between Joslin and Stinson, bringing out the caution. Allen was the race leader on the restart as Joslin and Stinson restarted from the rear.

Tom Wills, Jr. was declared the 2019 Champion – his second title in three years.

The Bridgeport Speedway will return to action at the end of the month with the two day, King of the Big Block event. The Small Block Modifieds and Outlaw Stocks will compete in a double header show on Friday night. There will be open practice sessions on Friday night as well as the competition prepares for the fourth running of the King of the Big Blocks. Racing gets underway at 7:30 pm. On Saturday, all eyes will be on the Big Block Modifieds and the 602 Crate Sportsman with the green flag waving at 6:30 pm. 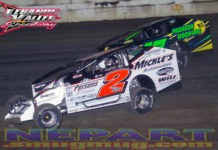 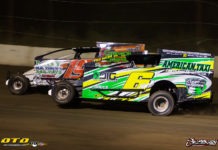