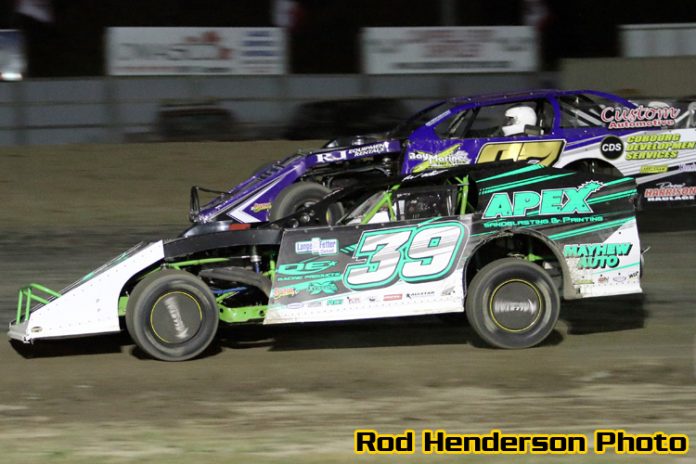 BRIGHTON, ONT – Polesitter No. 39 Jonah Mutton dominated all 25-laps of the Bainer’s Oil GARD Anti-Rust Canadian Modified main event. After securing his first career modified win two weeks ago, the Brighton driver was intent on parking it again as he held off veteran drivers No. 07 Curtis King and No. 29 Rich Sanders. Mutton and King went door to door in a brawl that saw King lose power and on the 10th time by the No. 07 pitted due to mechanical issues. No. 48 Derrick Greig and No. 12 Adam Whaley pounced on the opportunity to clash with Mutton for first while heavy hitters No. 87 Andrew Hennessy and No. 91 Kraig Handley muscled their way up from the back. With five laps left to go Hennessy and Kraig pushed Greig and Whaley back into fourth and fifth as they tried to intimate Mutton from the rearview. The tension continued to mount as a caution brought the chase to a halt on the last lap. At the drop of the flag Mutton stomped on the gas and flew to victory lane picking up his second season win. Handley took home second, Hennessy third, Greig fourth and No. 32 Doug O’Blenis fifth.

Turner brothers score back to back podium finishes at Brighton

The winged warriors brought their attitude and a packed enthusiastic crowd to Brighton Speedway on Saturday night.


No. 0 Holly Porter jumped on the lead from her second starting position on the first lap and never let off the throttle for much of the Southern Ontario Sprints 25-lap feature event. Porter was fierce as she dominated and drifted through the turns making it difficult for her opponents to catch her. No. 91 Ryan Turner put the hammer down and strong armed his way from fifth into a side by side battle with polesitter No. 21 Kyle Phillips for runner up. Phillips was fast but he couldn’t keep the pace against Turner and his brother No. 97 Cory Turner who was determined to make it two in a row at Brighton. Heavy lap traffic slowed the leaders and with four laps to go Ryan Turner snatched the lead from Porter. Turner took off scoring his first career win in front of an excited crowd and pit crew. Cory Tuner picked up the second-place finish, Porter earned a much deserved third. No. 84 Tyler Rand placed fourth and No. 38 Tyler Hendricks finished fifth.

Sandercock racks up another win

No. 57 Charlie Sandercock led the field of Vanderlaan Late Models to green in the 30-lap feature and never let off the loud pedal. Determined to get back to victory lane the Trenton driver took off from the drop of the flag as No. 09 Robbie Wilson and No. 5 Steve Baldwin waged a thrilling side by side battle for runner up. No. 29 Phil Potts joined in the fight and the trio treated fans to an intoxicating three-way duel. Baldwin got tangled up with Wilson and No. 1 Andy Mayhew rounding turn four forcing the No. 5 and 09 machines out of contention for the night. Potts moved into runner up and entered into combat with Sandercock for the lead. Committed to secure his fourth win of the season Sandercock went off to park it in victory lane leaving Potts to settle for second. Mayhew took home third. Solid and consistent right to the finish No. 46 Brandon Mowat and No. 77 Caley Weese earned fourth and fifth place finishes respectively.

No. 03 Justin Ramsay occupied pole position in Larry’s Towing Triple Crown race 3 for the Brighton Automotive Thunder Stocks and never relinquished the point. The Belleville driver was unfazed as No.72 Doug Anderson and No. 85 Austin Reid brawled at his back bumper. On the 15th trip around mechanical problems proved unlucky for Reid and on the restart, Anderson set his sights on Ramsay again. The only two drivers with triple crown wins to their names this season went to war bent on settling the score. Set on waiving the checkered flag, Ramsay held on to the inside line and sailed to victory lane leaving Anderson to settle for a hard fought second. No. 48 Adam Wells went on to take third, No. 28 Dan Insley placed fourth and No. 14 Chris Dorland finished fifth.

Four in a row for French

It took just six laps for No. 0 Tyler French to come from behind and snatch the lead from pole sitter No. 80 Nick Morton in the Bill John’s Comp 4 feature. From his eleventh starting position, the Belleville driver forced his way to the top and led the remaining 14 laps of the caution riddled 20 lap event. No. 11 Adam Flieler also moved his way up from the back of the pack but it would be No. 43 Devon Kippen that proved to be French’s toughest competitor. A steadfast French held his own and took off to victory lane scoring his fourth consecutive win. Kippen picked up second, No. 13 Joel Dempster won third, No. 52 Doug Galt placed fourth and No. 50 Willy Bulten finished fifth.