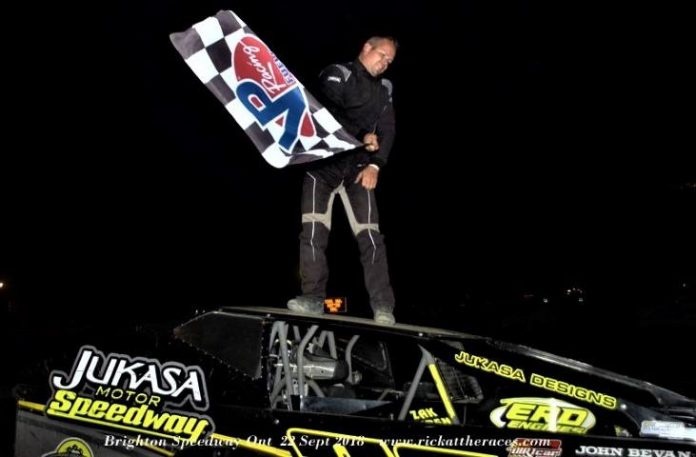 The 14th annual Applefest Shootout was led to green by No. 19 Luke Stewart and No. 52 Jessica Power. The pair battled it out for a few laps of the 75-lap main event but they were no match for No. R70 Ryan Arbuthnot as he moved in and snapped the lead on the 12th time by. No. 66 Kyle Dingwall, No. 6 Matt Williamson and No. 28z Gary Lindberg also joined in the fray. The halfway point proved to be lucky for Lindberg as he slid into first place and took off. Hungry to secure two consecutive Applefest victories, Williamson was Lindberg’s toughest contender. A restart with three laps left set up a perfect shootout to the finish between Lindberg Williamson and Dingwall who was running third. Linberg jumped back out front in the No. 28z machine on the restart as he cruised to the finish line first. Dingwall edged out Williamson at the line to take took runner up, No. 47s Corey Wheeler finished fourth and No. 3rs Ryan Susie placed fifth.

The Great Crate Race for the Northeast Late Model Alliance shared centre stage Saturday night as a full field of cars took to the track for a big pay day. Fulton Speedway driver No. 10 Chris Fleming and No. 57 Charlie Sandercock bolted to the top where they engaged in a side by side duel for the majority of the 50-lap A-Main. Fleming fought Sandercock from up high but lapped traffic became part of the picture and seemed to work against Flemming. Sandercock snapped up the lead on the 17th time by and never relinquished the point. Even after multiple restarts, the Trenton driver checked out, scoring back-to-back NLMA wins on the weekend. Fleming picked up a well-earned second, No. 29 Phil Potts took third place, No. 12 Kyle Sopaz finished fourth and No. 89 Austin King placed fifth.

Rouse and Friesen Dominate In Sportsman

From the drop of the green flag Friday night polesitter No. 88x Xavier Andrews was tough on the bottom while No. 33 Ryan Scott battled from outside for the first 7 laps of the 35 lap feature. The pair went to war while No. 18R Brad Rouse fiercely hunted them down from his fourth starting position. Rouse stole the lead on lap 15 and never looked back as No. 7 Cody McPherson shot into second trying to catch the 18R machine. Rouse parked it leaving McPherson to settle for second. Scott finished third, Andrews took home fourth and No. 8s Justin Sharp was fifth.

No. 17 Tristian Draper and No. 72 James Michael Friesen led the Sportsman field to green in Saturday’s 35-lap feature. The pair went door to door for 12 thrilling laps until Friesen stomped on the gas and took the lead. Unable to keep the pace, Draper dropped back to fifth as No. 44F Jonathan Ferguson and No. 7 Cody McPherson engaged with Friesen. The 72 machine held his own for the next 23 circuits and went on to win the feature. McPherson was runner-up, Rouse scored third, Ferguson placed fourth and No. 20K Kyle Inman was fifth.

Reid takes Duel On The Dirt

No. 14 Chris Dorland and No. 5x Andrew Hennessy took the field of Thunder Stocks to green in the 50-lap Duel on the Dirt Finale. The two Prince Edward County drivers duelled side by side until a caution slowed the pace on the 8th lap and Hennessy got the advantage on the restart. Hennessy dominated the chase down low as No. 03 Justin Ramsay battled at his back bumper and No. 85 Austin Reid patiently gained positions from a tacky high side. From that point Reid slid in to the lead from the outside clinching his first Duel on the Dirt win. Hennessy scored a well-earned second, Ramsay third, No. 17 Jeff Humphry was fourth and No. 53 Wade Purchase fifth.

In the prelude on Friday No. 03 Justin Ramsay and No. 47x Kyle Pelrine treated fans to a thrilling chase for checkers. Ramsay strong armed his way past Pelrine on lap 14 and the tension
continued to rise when another caution brought the action to a halt on the last lap. In a death match to the finish it was Ramsay who waved the checkered flag. No. 96 Steve Shaw scored second, Pelrine third, No. 85 Austin Reid fourth and No. 51 Mike Freeman fifth.

No. 39 Jonah Mutton jumped on the lead from his second starting position on the first lap of the 25-lap UMP / Canadian Modified feature. He paced the entire main event as No. 48 Derrick Greig, No. 12 Adam Whaley and No. 3 Nathan Rinaldi and No. 87 Andrew Hennessy flexed their muscles in the rearview. Hennessy zeroed in and the pair engaged in an exhilarating duel that ended in a photo finish with Mutton tasting victory. Hennessy earned second, Whaley third, Greig fourth and Rinaldi fifth.

No. 01 Brandon Gregory and No. 75 Kenny Polite led the group of Eastern Ontario Vintage Stock cars to the green flag in the 25-lap feature. Polite was anything but that as he stole the lead on the 17th trip around and sailed to checkers leaving Gregory to settle for second. No. 33 Cory Winters placed third, No. J73 Josh Powers was fourth and No. 14 Nathan Berry was fifth.

No. 14M Joe McNichols and No. 11 Adam Flieler started on the front row for the 25-lap affair. Flieler was the class of the field and led every lap on route to the victory. McNichols took second, No. 43 Devon Kippen placed third, No. 22 Keith Dunk fourth and No. 13 Joel Dempster fifth.

Up Next At Brighton Speedway

Another double header weekend is upon us! This time the First Annual Kart Klub Shootout will be Saturday, September 29th beginning at 4:00 pm. This afternoon of go kart action is open to all kart racers under the WKA Rules and we look forward to seeing young racers from both the East and the West join us for the day. Added to this already exciting event will be Lawn Tractor Racers. Two divisions will race competitively in the Supermod and the Open classes. Registration will take place prior to the event on Saturday.

The Season Finale will occur on Sunday, September 30th beginning at 1:00 PM. The Lange & Fetter Eve of Destruction will feature the Workman Ok Tire & Automotive School Bus Races, the Hotch’s Auto Parts 100 Lap Enduro, Juniors Enduro and Ladies Enduro. The Guantlet Race, The Long Jump, The Flag Pole Race, The Trailer Race and the Brighton Recycling Demolition Derby. This epic day of fun and excitement is thrilling and entertaining so you don’t want to miss out! Back Gates will open at 7:00 am for participants and 11:00 am on the Grandstand Side. Racing starts at 1:00 pm. Admission for Adults is $20.00, Youths and Seniors are $18.00, Children 7 to 12 are $5.00 and 6 and Under are Free. Be sure to see the schedule at www.brightonspeedway.com or visit us on Facebook!