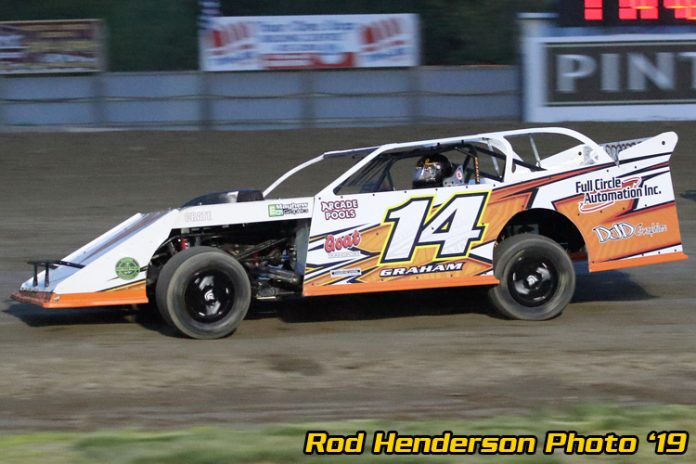 No. 0 Andy Mayhew and No. 77 Caley Weese led the field of Vanderlaan Building Products Late Models to green in the 35-lap feature. With Triple Crown and Northeast Late Model Alliance Race 1 bragging rights on the line, Weese quickly snagged the top spot. Weese looked like she was well on her way to securing her first checkers of the season, holding off the likes of No. 57 Charlie Sandercock and No. 29 Phil Potts. A slip on turn 4 knocked the #77 loose on the 19th time by costing her the lead and Sandercock jumped on the opportunity to steal the post. A handful of cautions slowed the pace treating fans to a side by side battle between Sandercock and Campbellford Chrysler driver of the week No. 55 Bradley Rayner. Sandercock pushed hard to victory lane leaving Rayner to settle for a hard earned second. No. 46 Brandon Mowat took third, No. 20 Tim Kerr placed fourth and No. 7 Adam Nayler fifth.

Thirsty for his first Canadian Modified career win since making the switch from pavement a year ago, No. 14 Brandt Graham took the field to green in the 30-lap Triple Crown main event. Graham went door to door with No. 1 Shawn Gregory for the lead as No. 87 Andrew Hennessy worked the high side biding his time looking for his chance to pounce. Now in top spot Gregory hit a piece of clay and Hennessy had to sacrifice runner up to avoid a wreck costing him three positions. Their spoils opened the door for Graham who rose to the occasion and sailed to victory lane. No. 39 Jonah Mutton drove hard from the back of the pack to place second, No. 12 Adam Whaley finished third, Hennessy earned fourth and Gregory fifth respectively.


Reid racks up a repeat

No. 17 Jeff Humphry led a solid field of 23 cars to the green flag in the caution riddled Insta Panels Thunder Stock Duel in the Dirt 25-lap Race 1. On the first lap Humphry did a 360 into turn two causing a big wreck that five others got the brunt of. The big one forced Humphry to the back while No. 19 Cory White and No. 53 Wade Purchase earned top spots on the restart. White had his work cut out for him as No. 72 Doug Anderson, No. 85 Austin Reid, No. 51 Mike Freeman and Purchase closed in on his back bumper. Coming off his first season win last weekend, Reid was determined to get back to victory lane Saturday night. Reid took no time at all to move up into runner up from his 14th starting position and by the 18th trip around the lead was his. Reid flew in his 85 to checkers with Anderson in second, Purchase third, No. 17 Humphrey fourth and No. 03 Justin Ramsay fifth.

A full field of 12 school buses dialed in to thrill fans to four wide racing at its finest. No. 53 Mike Workman was a fan pleaser as he schooled the pack in his low rider bus. The modified school bus appeared to be on his way to victory lane in the 15-lap feature when mechanical issue stopped the low rider in its tracks. Coming off a first-place heat finish No. 44 Jim Perry slid into first and banged side by side with No. 55 Paul Quick in a battle to the finish. Perry went on to take his fifth career feature finish with Quick in second and No. 77 Bernie Rhebergen third.

It’s been 25 years since No. 52 Doug Galt has waived a checker flag and he was beaming when the much-anticipated opportunity presented itself again Saturday. On the third lap of the 20-lap Insta Panels Comp 4/Mini Stock Duel in the Dirt Race 1, Galt made his move into first and held on throughout the caution plagued affair to taste victory again. No. 13 Joel Dempster placed second, No. 43 Devon Kippen earned third, No. 17E Emily Peterson placed fourth and No. 4 Chris Tufford fifth.

It only took No. 7 Anthony Rinaldi three races in his mini-stock to secure his first career win. In a race that only saw 5 total cars finish between the two divisions that 16 cars had started. Rinaldi kept his nose clean and car straight to finish 4th in the ring order and take home the win for the mini-stocks. 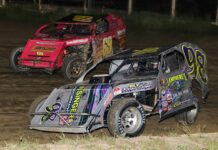 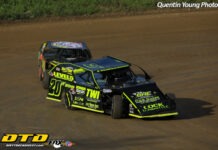 Ward Makes Long Haul Worth It At Penn Can