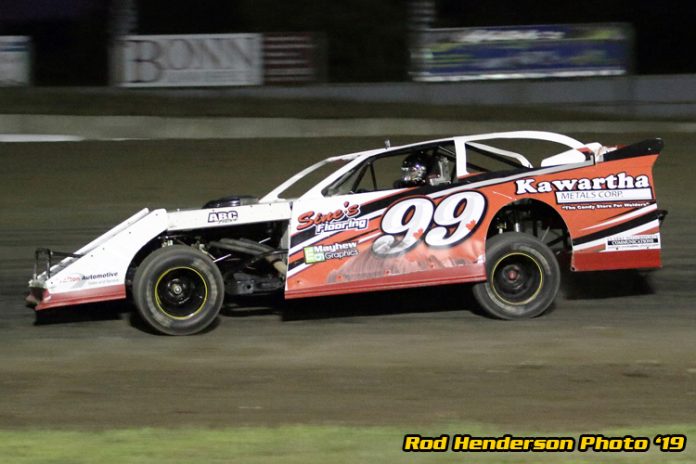 BRIGHTON, ONT – It only took seven laps for No. 99 Linc Brown to work his way up to first from his fourth starting position in the Bainer’s OilGard Ant-Rust Canadian Modified 25-lap affair. Once Brown had the lead he never gave it up as No. 12 Adam Whaley, No. 07 Curtis King, No. 29 Rich Sanders and No. 48 Derrick Greig worked off in the distance desperately trying to catch the 99. Thirsty for another victory, Brown was hooked up and parked it securing his second Canadian Modified career win. Whaley scored a second-place finish, King third, Sanders fourth and Greig fifth.

It was a Steve Baldwin show in the 35-lap Vanderlaan Building Products Late Model Hotch’s Auto Parts Triple Crown Race 3. He quickly moved his No. 5 machine into first from his sixth starting position and took off. Coming off a Northeast Late Model Alliance win the weekend before at Cornwall Motor Speedway, Baldwin appeared to be well on his way to securing his first season win at Brighton. As Baldwin continued to move closer to checkers, so did No. 57 Andrew Hennessy. Subbing for Sandercock’s team 57, Hennessy muscled his way up from his thirteenth starting position and with just six laps to go, he charged in front of Baldwin to snap up the lead. Hennessy booked it to the finish line, for the second time in as many nights, leaving Baldwin to settle for a well-deserved second. No. 29 Phil Potts took third, No. 09 Robbie Wilson was fourth and No. 55 Bradley Rayner fifth.

Purchase pays another trip to checkers

No. 2 Leslie Mowat wasted no time jumping on the lead and looked like she was well on her way to winning her first Brighton Automotive Thunder Stock feature of 2019 Saturday night. She was dominate for the majority of the 20-lap main event as No. 48 Adam Wells, No. 53 Wade Purchase, No. 87 James Turgeon, No. 72 Doug Anderson and No. 03 Justin Ramsay tried to strong arm her from behind. With two laps to go Purchase, Wells, Ramsay and Anderson overpowered Mowat and shuffled her 2 machine back four spots. Purchase drove hard to victory lane scoring his third win of the season. Wells was runner up, Ramsay third, Anderson fourth and Mowat placed fifth respectively.

All No. 44 Tommy Bailey needed was one lap to secure his fifth feature win of the season and he did it in the last lap of the Bill’s John’s Comp 4 20-lap event. No. 17E sub driver Doug Bulter dominated the affair but on the final time by Bailey scooped up the lead and sailed to victory lane leaving Butler to settle for second. No. 43 Devon Kippen placed third, No. 11 Adam Flieler fourth and No. 87 Mike Beaudrie fifth. No. 12 Caleb scored the mini-stock feature win. No. 14m Matthew Moore was second and No. 7 AJ Rinaldi placed third.

IMG 1781 No. 88H Josh Hansen led the Action Sprints to green in round 9 of their tour that included a stop at Brighton Saturday night and cruised to victory lane for the third time this season, capturing his fourth career win.

IMG 2018 It only took seven laps for No. 99 Linc Brown to work his way up to first from his fourth starting position in the Bainer’s OilGard Ant-Rust Canadian Modified 25-lap affair at Brighton Speedway on Saturday, August 17th. 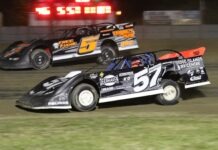