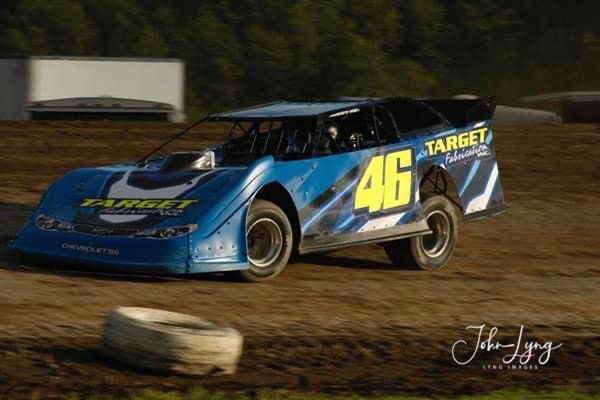 However the racing was anything but cool as 82 cars dialed in for a full card of high energy.

Polesitter No. 7 Adam Nayler and No. 46 Brandon Mowat treated fans to one of the best side-by-side battles of the evening. During the 30-lap Vanderlaan Building Products Late Model main event, the pair duked it out door-to-door and finally on the 10th time by Mowat broke free of Nayler as No. 311 Sam Pennacchio, No. 87 Andrew Hennessey No. 57 Charlie Sandercock muscled their way closer to the leaders. Even after multiple re-starts and a great pursuit by Pennacchi, nothing could keep Mowat from victory lane.


Hungry for his third win on the season at Brighton, No. 87 Andrew Hennessy wasted no time getting up into the top three from his sixth starting position. Hennessy and No. 07 Curtis King went to war for the top spot in a caution riddled 25-lap Bainers Oil Guard Canadian Modified affair. On every re-start King proved Hennessey’s biggest contender however nothing was going to keep the 87 from tasting victory. King took second, No. 12 Adam Whaley was third, No. 32 Doug O’Blenis fourth and No. 48 Derrick Greig fifth.

Adam Turner was bent and bound to park his No. 92 machine in victory lane Saturday. From the drop of the green flag Turner was unstoppable leading all 20-laps of the Brighton Automotive feature. On the 5th lap an impressive three-wide performace by No. 03 Justin Ramsay, No. 0 Tyler French and the No. 53 Wade Purchase acted as a sling shot – propelling the 53 into 4th. Purchase used that momentum to try and catch Turner. Heavy traffic slowed the pace but it wasn’t enough for Purchase as Turner parked it. Purchase took second, No. 17 Shawn Gregory was third, No. 48 Adam Wells fourth and Ramsay fifth.

Tommy Bailey was determined to clinch back-to-back checkers as he took no time at all to move Bill John’s Comp 4 No. 44 machine from fourth position into the top spot in the 15-lap event. He battled pole sitter No. 17E Emily Peterson in a back and forth battle at its finest. Try as she might Peterson couldn’t hold Bailey off. He sailed to the finish line and Peterson took a hard earned second. No. 19 Tristin Boutilier was third and No. 14m Matthew Moore finished fourth and was No. 43 Devon Kippen fifth. No. 25 Lawerence Evenden finished first in the ministock division.

No. 93 Jordan Pickell led the field of 17 Quinte Septic Stingers to green and was dominate as he led 8-laps of the 12-lap feature. Pickell looked like he was well on his way to a first place finish, however No. 95 Chris Lammle spoiled those plans on lap 9.

The next race event is scheduled for Saturday, September 5th with five divisions on the race card. Supported by amazing sponsors, the 2020 season could not happen without them. As promoter Mark Rinaldi continues to advocate for additional fans in the stands, tickets remain reserved for sponsors of the upcoming events and are not available at the front gate.