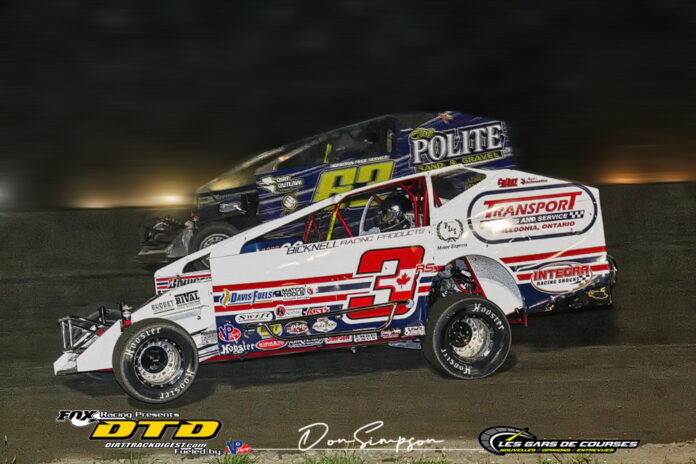 BRIGHTON, ONT – Mother nature was no match for the 17th Applefest Shootout at Brighton Speedway on Saturday night.

The biggest night of racing at the 1/3 mile oval track saw 172 cars dial in for an action-packed night that was delayed by rain however officials were driven to see it go off without a hitch.

The DIRTcar 358 Modified and Dirtcar Sportsman series headlined the event along with the Late Models, Canadian Modified/UMP’s, Thunder Stocks and Comp 4/Mini Stock engaging in 200 feature laps on top of multiple heats and timed hot laps.

No. 01 Chris Raabe looked like he was well on his way to scoring his second Applefest Shootout in the 50-lap Dirtcar 358 Modified Applefest Shootout. He jumped on the lead on lap 11 and drove away with no contest. Then with two laps to go mechanical issues forced the 01 to pit road. No. 03RS Danny O’Brien was awarded the lead and drove hard to victory lane taking his 1st Applefest Shootout win with No. 47s Corey Wheeler in second. No. 15B Brianne Ladoceur took home third, No. 63 Chris Herbison was fourth and No. 12 Chad Chevalier fifth.

Polesitter No. 55 Bradley Rayner dominated the majority of the 40-lap Northeast Late Model Alliance Great Crate Race. Rayner rode his 55 on the rails as No. 5 Steve Baldwin tried his hardest to catch him. No. 87 Andrew Hennessy, No. No. 92 Adam Turner and No. 57 Charlie Sandercock were fierce in their pursuit of the leaders. With three laps to go Hennessy caught up with Rayner and took the lead. Hennessy drove hard to victory lane with Rayner in second, Sandercock third, Turner fourth and Baldwin fifth.

No. 33 Ryan Scott jumped on the lead at the drop of the green flag and never relinquished the point in the 30-lap Dirtcar Sportsman Series feature event. No. 1R Ricky Thompson and No 88 z Bobby Herrington tried their best to chase down Scott but it wasn’t enough. When the checkers flew it was Scott who secured his first Dirtcar Sportsman series win. Herrington picked up a hard-earned second, No. 18 Brad Rouse was third, Thompson fourth and No. 94 Gabriel Cyr was fifth.

Determined to score his first career Canadian Modified win No. 29 Rich Sanders jumped on the lead from the drop of the green flag in the 30-lap Modified/UMP Series main event. Sanders took off as No. 51 Kyle Sopaz and No. 32 Doug O’Blenis gave chase from behind. 2021 champ No. 1 Shawn Gregory worked the high side from his seventh starting position and on lap 17 he went wheel to wheel with Sanders in a back and forth thriller. Gregory spun out on turn 4 and was forced to the back of the pack but flew like a lightning bolt through the field on the restart. But there weren’t enough laps left and Sanders stormed to victory lane with Sopaz in second, No 69 Jullian Phillips third, O’Blenis fourth and No. 20 Terry Hunt fifth.

Turner takes all the apples

Race fans were treated to a back-and-forth thriller by polesitter No. 40 Ronnie Wadforth and No. 79 Chris Hale from the drop of the green flag in the 30-lap Thunderstock Duel in the Dirt Saturday night. Technical issues ended Wadforth’s night early providing the perfect opportunity to No. 92 Adam Turner to snap up the lead. Turner was flawless as he sailed through each and every turn with No. 72 Doug Anderson and No. 03 Justin Ramsay hot on his heels. The veterans hunted the 92 down with a vengeance but Turner didn’t flinch. As a caution slowed the pace on the last lap the Turner drove his 92 to victory lane with Ramsay finishing second. Anderson picked up third, No. 17 Jeff Humphrey fourth and No. 26 Kraig Handley fifth.

It only took Comp 4 No. 25 driver Bob Ray two laps to work his way up from his ninth starting position. He looked like he was well on his way to securing an Applefest win as he dominated much of the 20-lap feature but on the 12th time by No. 43 Devon Kippen snapped up the lead. Rain began to pour and stopped the race. Kippen was declared the winner, No. 30 Marc Dagnais was second, Ray third, No. 68L John Lamarche fourth and No. 21 Marc-Andre Voyer fifth.

The action is back on the track for the final event of the season this Saturday, October 2nd for the Lange & Fetter Ford Eve of Destruction presenting the Workman OK Tire School Bus Races and the Hotch’s Auto Parts Endurance races. This fun filled day will run Rain or Shine and begin at 1:00 pm. Tickets are available ONLINE at brightonspeedway.ca and are selling fast!