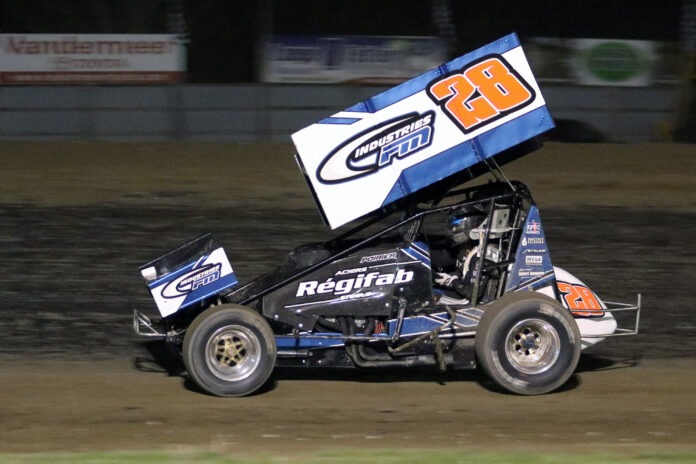 BRIGHTON, ON- The Southern Ontario Sprints brought a thunderous storm back to Brighton Speedway on Campbellford Chrysler and Brighton Recycling race night #4. Brighton Speedway Officials hustled under a power outage delay and were able to get the show back on schedule once power was restored around 5pm. A total of 87 cars were in attendance fighting off Mother Nature to put on a spectacular show for fans.

Poirier Parks it for the Southern Ontario Sprints

The No. 5D of Jacob Dykstra and the No. 1-10 of Jake Brown led the 18 SOS sprint cars to their first feature start at Brighton Speedway for the series in years. The seventh-place starter Jordan Poirier took no time at all getting to the front of the field, but it was Brown leading the opening 7 laps. Poirier took the lead from Brown on lap 8.

The first and only caution of the night was brought out on lap 9 for the No. 98 of Paul Pekkonen who spun in corner two. The field was able to quickly restart and get back to their dirt flying action that race fans love.

In Vanderlaan Building Products Ltd. Late Model action, Charlie Sandercock (No. 57) used his pole starting spot to his full advantage and led all 30 laps for his first win of the season. Sandercock was able to hold off Andrew Hennessy (No. 87) for a tight battle towards the end of the feature event.

On lap 6, the caution came out for the No. 77 of Caley Weese who went around in three and four, unavoidably Brandon Mowat (No. 46) and Adam Turner (No. 92) got collected. Weese and Mowat both went into the pits but were able to rejoin the field on the lead lap, Turner unfortunately suffered too much front end damage ending his night.

The final restart took place on lap 10 for the No. 21 of Rich Sanders who spun around in the nights pesky turn three and four. With the field being stacked back up, Hennessy was able to quickly take the runner up position from Brad Rayner (No. 55) not long after the restart. Steve Baldwin (No. 5) respectively rounds off the podium positions for the evening.

Purchase Prevails for the Second Time

Polesitter Nathan Rinaldi (No. 3) led the opening lap of the Bainer’s OilGARD Anti-Rust Canadian Modified feature, but it was the Wade Purchase (No. 53) show from there. Purchase took the lead on lap 2 and held off fellow competitors for over 23 laps and 3 restarts to claim his second career victory in the division.

This Canadian Modified feature saw its first caution of the night for the No. 14M of Matthew Moore on lap 6, Purchase and Rinaldi led the field back to green with the pole sitter Wade Purchase choosing the outside groove. On lap 11, the field was slowed once more for a yellow for Rinaldi around in corner three. Rinaldi seemed to have been struggling with steering issues after tagging the wall in a three-wide battle going down the front-stretch.

Purchase sailed on the high side until about 5 to go where he moved to the preferable bottom groove of the race track and held off O’Blenis and King for the win.

Kraig Handley (No. 26) earns his first victory of the season in the Brighton Automotive Thunder Stock division. This Saturday was the first home track event for the drivers participating in the INSTA-PANELS Duel on the Dirt Series.

The No. 72 of Doug Anderson, started in the second-place position and quickly got ahead of pole sitter Mike Lucas (No. 74), but fourth-place starter Kraig Handley quickly stole the race lead on lap 3. The 24-car field was slowed for the first caution when Doug May (No. 23) got into the back of the No. z28 of Cole McKeown sending him around in turn four.

Brock Gregory (No. 1) stole the final podium position away from Tyler French (No. 0) at the halfway mark. The large field was slowed for the final time on lap 17 for the No. 4 of Steve Peake who went around in four and the No. 87 of James Turgeon was collected.

Handley, Anderson, and Gregory held on to their podium positions for the final restart with French and Josh Black (No. 9) rounding off the top five.

Chris Tufford (No. 4) narrowly wins over Anthony Rinaldi (No. 7) in an action-packed Bill’s Johns Mini Stock Feature. Rinaldi led 13 of the 15 laps with Tufford stealing the victory by 0.049 secs in the caution free event.

Fifth-place starter Austin South (No. 72) quickly got in the third-place position until having to battle for the position with the No. 18 of Carter Rhodes. Rhodes overtook the third-place spot on lap 9 and tightly followed behind Tufford and Rinaldi to the checkers.

Catch the action next Saturday, May 28th for the first Fan Appreciation night of the season presented by Fidelity Engineering. Fans of all ages will have the opportunity to meet their favourite drivers on the track at intermission for autographs, pictures and goodies. Vanderlaan Building Products Late Models, Bainer’s OilGARD Anti-Rust Canadian Modifieds, Brighton Automotive Thunder Stocks, Bill’s Johns Comp 4, Bill’s Johns Mini Stocks and Quinte Septic Stingers will all be in action for the popular event. 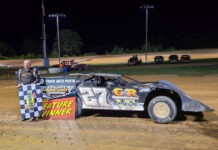