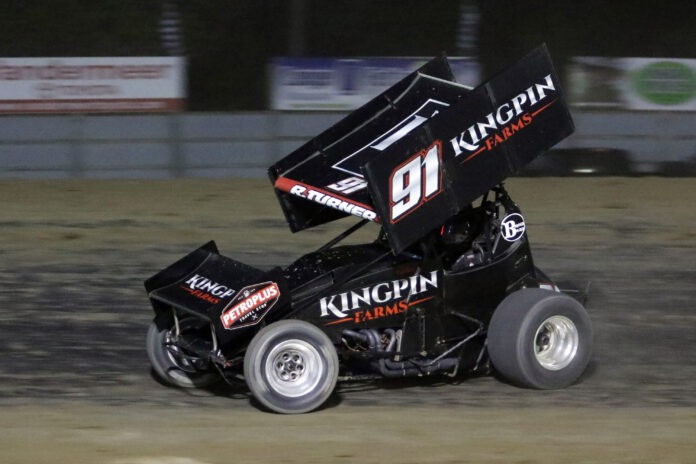 BRIGHTON, ON- Brighton Speedway saw a packed and enthusiastic crowd cheer on the Southern Ontario Sprints Saturday as they made their second visit this season. The night presented by Deerhaven Powersports and John West Construction saw a total of 73 cars signed in for the action. The night’s racing card also featured the Vanderlaan Building Products Ltd. Late Models, Bainer’s OilGARD Anti-Rust Canadian Modifieds, Bill’s Johns Comp 4 and Mini Stock Division battle it out for race night #7.

The Southern Ontario Sprints made their second appearance this season and as usual brought an exciting action-packed night for race fans. The 25-lap event kicked off with a spectacular 4-wide salute to fans with some firework action courtesy of Mystical Distributing. The pole sitter Jake Brown (No. 1-10) took the early race lead and set the fastest time of the night with a 13.910 on the first lap. Third place starter Ryan Turner (No. 91) quickly took the second-place position from Aaron Turkey (No. 68). Turner then had his sights set on chasing down Brown for the race lead, with less than 5 to go Turner was successful in stealing the race lead from Brown and driving it straight to the checkers. Brown finished respectably in the runner-up position, Turkey (No. 68) third, Holly Porter (No.1) fourth and Mitch Brown (No. 10) taking home the fifth-place position. Jake Brown (No. 1-10) and Ryan Turner (No. 91) win the qualifying heat races for the evening.

The Vanderlaan Building Products Ltd. Late Models 30 lap feature event was set to green by Rich Sanders (No.21) and Kyle Sopaz (No.11). Sopaz jumped to the first-place position very quickly and was not giving it up. The field was tightened up and restarted twice for two cautions early on, giving Andrew Hennessy (No. 87) a chance at the race lead. However, Sopaz was determined to get the win and sailed to victory lane for the first time this season. Seventh-place starter Steve Baldwin (No.5) was coming in hot, gaining him the second-place position, Hennessy third, Charlie Sandercock (No.57) fourth and Caley Weese (No.77) in the fifth position. Sopaz and Adam Turner (No.92) are the division’s heat race winners.

Curtis King (No. 07) and Pat McEvoy (No. 56) led the Bainer’s OilGARD Anti-Rust Canadian Modifieds to the green flag of their 25-lap affair. The night’s feature saw numerous cautions with a heavy and fast race surface and one tricky turn 3 & 4 for some drivers. However, third place starter Shawn Gregory (No. 1) made no time jumping to the race lead and battling with King back and forth for the No. 1 spot. Eighth-place starter and points leader Wade Purchase (No. 53) battled his way through the field with the several restarts earning him the runner up position. King followed behind in third, with Doug O’Blenis (No. 32) and Ron Wadforth (No. 40) rounding out the top 5. Purchase and King took home the division’s heat wins.

Bogaard Books it to Victory Lane

The Bill’s Johns Comp 4 Division started the evening features off with an almost perfect green to-checkers performance, with one caution being brought out on lap 1. The field was led to green by the No. 20 of Cody Sager and the No. 33 of Adam Milton. Sager led the first of fifteen until the determined fourth-place starter of Josh Bogaard (No. 15) took the race lead after the restart and did not look back for the remaining 14 laps. Aidan Fletcher (No. 42JR) took home the runner-up position, with hard charger Tommy Bailey (No. 44) taking home third having to start at the rear of the field after suffering mechanical issues in the heat race. Milton (No. 33) and Adam Flieler (SUB for Devon Kippen No. 43) round off the top 5. Bogaard and Fletcher took home qualifying heat wins.

Campbellford Chrysler’s Driver of the Week No. 18 of Carter Rhodes worked his way from the eleventh starting position to claim himself a back-to-back feature win. The Bill’s Johns Mini Stocks saw a handful of cautions throughout the 15-lap event and five different race leaders. Race starter Lawrence Evenden (No. 25) held on to the lead for 2 laps until young rookie Tyson Gregory (No. 22) soared to the race lead until suffering a mechanical failure on the back stretch and bringing the first yellow. With the finish closing in, Rhodes and substitute driver Tyler Parker for the No. 11w of Mike Whyte had a hard-fought battle for the first-place position with Rhodes claiming victory. Parker took home second, Chris Lammle (No.95), Travis Connor (No. 24) and Lawrence Evenden (No .25) finishing the top 5.

Don’t forget to purchase your tickets online for Workman’s Ok Tire Quinte West School Bus races this June, 18th presented by Lange and Fetter Motors Trenton. This fan favourite is a reserved seating event and tickets can be purchased at the gate or online in advance through our website at www.brightonspeedway.com or directly through this link www.showpass.com/jun18_brightonspeedway/. Featured divisions for this event also includes Late Model, Canadian Modified, Thunder Stock, Comp 4 and Mini Stock.