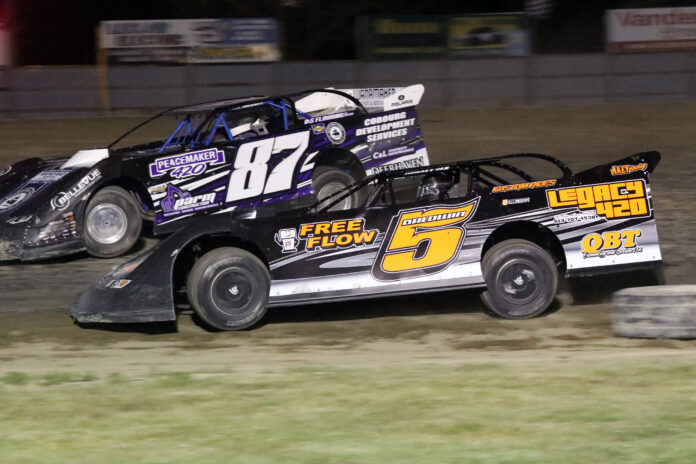 BRIGHTON, ON- It was sure one hot and fiery night at Brighton Speedway on Saturday. This action-packed night presented by Brighton Automotive and Mystical Distributing began with time trial qualifying to set their positions for heats and features for the mid-season championship.

Adam Turner No. 92 and Kyle Sopaz No. 11 brought the Vanderlaan Building Products Late Model field to green for their 50-lap battle for checkers. A dry-slick racing surface in combination with a higher purse had drivers bringing out cautions in this division a little more than usual. Sopaz held on to the early race lead until about lap 16 when the No. 5 of Steve Baldwin snuck by for the race lead and on to victory lane. Soaring on the outside to finish second was Sandercock No. 57, Sopaz third, Brandon Mowat No. 46 fourth and Caley Weese No. 77 rounding off the top 5

Curtis King No. 07 set the field of Bainer’s OilGARD Anti-Rust Canadian Modifieds to green alongside the No. 40 of Ron Wadforth, King held on to the early race lead until the No. 1 of Shawn Gregory and No. 53 of Wade Purchase made the pass on King on the outside groove. Shortly after a caution came out and reset the field, Purchase the hard charger of the night was able to get around Gregory on the bottom to see the race lead. A lap car works in Gregory’s favour, slowing Purchase’s preferred line. Gregory makes the pass for the lead and was hooked up on the high side as he flew to checkers with Purchase in second, King in third, Ron Wadforth No. 40 forth and Leslie Mowat No. 2 fifth.

French for First of the Season

From the pole starting position, the No. 1 of Brock Gregory led the field of 22 Brighton Automotive Thunder Stocks to green. Gregory led more than half of the 25-lap event, impressively the division had one of their lowest caution counts of the season, which made for great racing and a hard battle through lap traffic. A caution came out on lap 15, for the No. 9 of Josh Black who was spun on the backstretch, allowing the field to reset and tighten up. No complaints on the caution for the No. 0 of Tyler French as he was able to secure the lead from Gregory and not look back for the remainder of the race. French took the checkers, Gregory second, No. 85 Austin Reid third, No. 19 Cory White fourth and No. 17 of Jeff Humphry fifth. 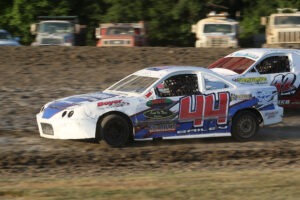 Tommy Bailey No. 44 earns his fourth win of the season in the Bill’s Johns Comp 4 division. As soon as the green flag fell Bailey took off from the pole position and flew to the finish in the 20-lap event. The small field of Comp 4 drivers saw two cautions to reset and stack the field back up in attempts to score the race lead, however Devon Kippen No. 43 and Aidan Fletcher No. 42jr just did not have enough for Bailey on the dry-slick race surface. Kippen finishes in the runner up position, Fletcher third, No. 15 Josh Bogaard fourth and No. 33 Adam Milton fifth.

Cole Abrams No. 96 and Anthony Rinaldi No. 7 led the field to green for the 20 lap Bill’s Johns Mini Stock feature event. The red flag was very quickly brought out for Campbellford Chrysler’s Driver of the Week No. 22 of Tyson Gregory who rolled his machine off turn 3, Gregory was uninjured. It wasn’t long until Carter Rhodes No. 18 was able to take the lead from Abrams. The field of Mini Stocks saw one caution on lap 6 for the No. 71 of Alesha Gerrard who was around in turn 4. The field returned to green, with Rhodes was determined for his fourth feature win in the division. Rhodes takes checkers, followed by Abrams, Austin South No. 72, Chris Tufford No. 4 and Lawrence Evenden No. 25.

Rapid Rad and QBT Excavating presents Southern Ontario Sprints, Late Model, Thunder Stock, Comp 4 and Mini Stock with a Kart Klub Demo on Saturday, July 9th.  Front Gates will open at 5:00 PM and Racing begins at 7:00 PM.  Admission for Adults is $25.00, Youths & Seniors are $20.00, Children 7-12 are $10.00 and Children 6 & under are $5.00.  Don’t forget to book your seat for the July 23rd Monster Truck Madness at the Speedway.  Visit BrightonSpeedway.ca to purchase your tickets in advance for this event that requires reserved seating. 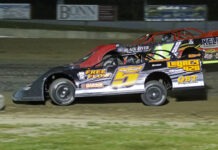 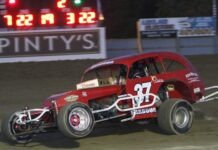 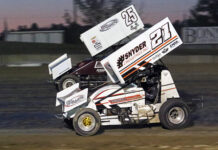 Phillips and Mowat Win at Brighton