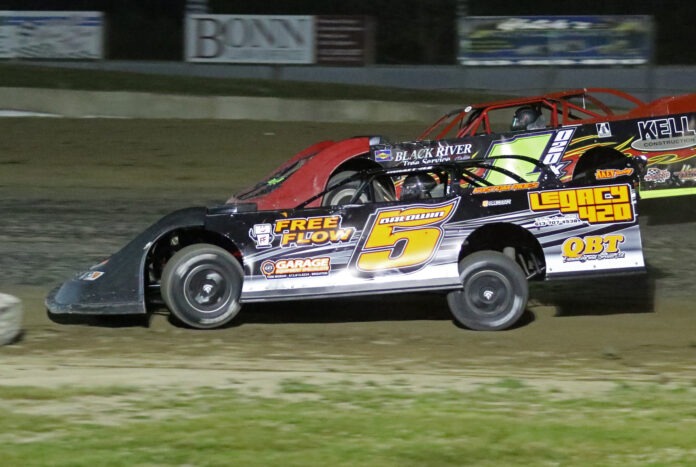 BRIGHTON, ON – The first Nostalgia Dirt Modified Tour appearance at Brighton Speedway was a busy one with six divisions featured on the race card Saturday night.

The tour headlined the event presented by Cobourg Development Services and the Community Press. The action did not disappoint with the Late Models, Canadian Modifieds, Mini Stocks, Comp 4s and Stingers also battling it out for checkers.

Steve Baldwin is now the winningest late model driver at Brighton Speedway this season. The Trenton native pounced on the lead at the drop of the green flag and had his No. 5 on a rail as he dominated all 30-laps of the Vanderlaan Building Products affair. Points leader No. 87 Andrew Hennessy and No. 57 Charlie Sandercock chased Baldwin hard as all three heavy hitters were on the hunt for a third-season win. Baldwin came out victorious securing win number three with Hennessy as runner-up and Sandercock close behind in third. No. 11 Kyle Sopaz finished fourth and No. 46 Brandon Mowat was fifth.

No. 53 Wade Purchase led the field of 15 Bainer’s OilGARD Canadian Modifieds to green in the caution-riddled 25-lap main event. Purchase was hooked up from the jump and never lost his cool as each yellow flag slowed the pace. With an excellent handling car and No. 32 Doug O’Blenis not able to reel him in, Purchase flew to victory lane for the sixth time. O’Blenis crossed second over No. 1 Shawn Gregory, No. 40 Ron Wadforth and No. 07 Curtis King.

The Nostalgia Dirt Modified Tour brought 13 cars to Brighton Speedway for their first ever appearance. No. 75 Randy Gaudet and No. 9 Jason Riddell led the field to green in the 20-lap main event. Riddell stomped on the gas, stormed his ‘85 Mercury Mercur into the top spot and took off. Riddell was unstoppable as Gaudet’s Gremlin charged and Brandon Gregory flew his No. 1 Falcon in the rearview. Riddell was the first to cross the line but was unfortunately disqualified due to weight issues at tech. Checkers were awarded to Gaudet with No. 37 Matt Barbour picking up second, Gregory third, No. 17IG Ian Gordon fourth and No. 21 Aaron Pugh fifth.

No. 72 Austin South took the field of 16 Bill’s Johns Mini Stocks to green in the 15-lap feature. Glued to the bottom, South drove hard as No. 96 Cole Abrams worked his way up to second from fifth. The pair battled wheel to wheel and while going into turn two South opened the door for Abrams to steal the lead. Abrams drove to the winner’s circle with No. 18 Carter Rhodes in second, No. Chris Tufford third, No. 25 Lawrence Evenden fourth and South fifth.

No. 44 Tommy Bailey was determined to park his Comp 4 for the fifth time this season on Saturday night. Bailey took little time muscling his way to first from fifth in the Bill’s Johns 15-lap main. Trying for a repeat of last weekend’s win, No. 42JR Aiden Fletcher hunted Bailey down but it wasn’t enough. Bailey parked it leaving Fletcher to settle for second place. No. 20 Cody Sager was third, No. 35P Paul Reid fourth and No. 85 Brittany Golden fifth.

No. 67J Josh Whitney led a field of 19 Quinte Septic Stingers to the green flag in the 12-lap feature. Whitney looked like he was well on his way to winning however a disqualification forced him out of the race and pushed No. 26 Chris Sparks into the lead. Sparks hustled to the checkered flag for the first time in 13 years. No. 9 Zac MacDonald earned second, No. 17 Gavin Rushlow third, No. 14 Kevin Mutch fourth and No. 30 Ryan Hill fifth. 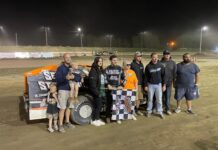